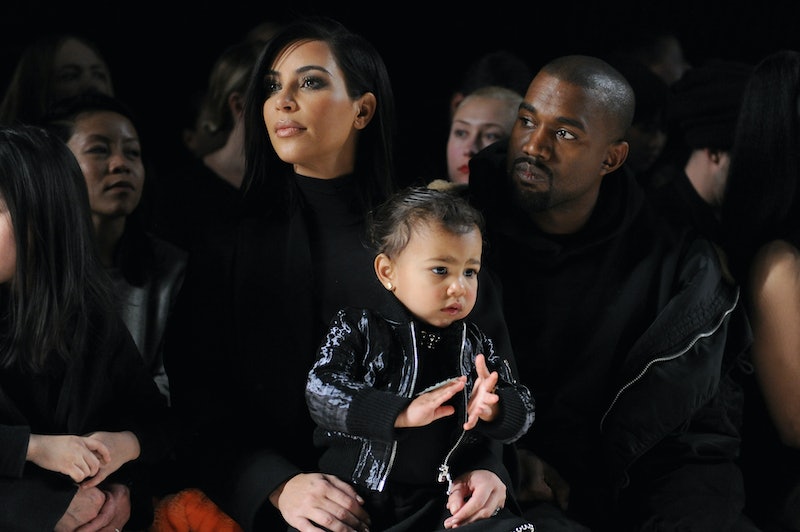 On Dec. 5, 2015, Kanye West and Kim Kardashian shared the happy news that they'd welcomed a baby boy into the world. Alas, one major detail had been omitted from the announcement: the newborn's name. Almost three whole days would pass before we would learn the name of the newest member of the Kardashian-West family. We started started to grow impatient. We wondered if the news would ever come. But before we could lose hope entirely, Kim shared the baby's name via Instagram post on Monday: Saint West. This probably won't shock anyone who knows me/knows my love for all things Kimye, but I am all about the name Saint West. Like North West, Saint West has a wonderful ring to it. Kimye did it again!

“I love spending time with North and Saint,” I imagine Kim saying in a future Keeping Up with the Kardashians talking head. "Before I know it, North and Saint will be all grown up. Every moment is precious." Oh, man. I have goosebumps already. The pairing of the names is just so lovely; “North and Saint” sounds like a line from a poem. Or a song lyric. Or a name of an intersection. It’s almost too melodic to handle.

If you thought my imagination was done for the day, think again! Because now I'm picturing Kimye gearing up for the weekly tradition of Kardashian-West Family Game Night. The two megastars stand at the base of a grand staircase, cup their hands around their mouths, and bellow “NORTH! SAINT! IT’S MONOPOLY TIIIIIIME!” at the second floor with relative ease. They do not trip up over their kids' names, for the names go together beautifully.

UH OH. My imagination won't stop sprinting around in circles. But what if their names are supposed to mean something when combined? Never one to ignore my rambunctious imagination, I googled “north and saint”/“north saint”/“saint north”/“saint and north." Here is what I found:

Can we go back to Nicholas St. North for a second? OK, please read this excerpt from the book description:

Before SANTA was SANTA, he was North, Nicholas St. North—a daredevil swordsman whose prowess with double scimitars was legendary.

Did Kimye name Saint and North after Santa Claus?!