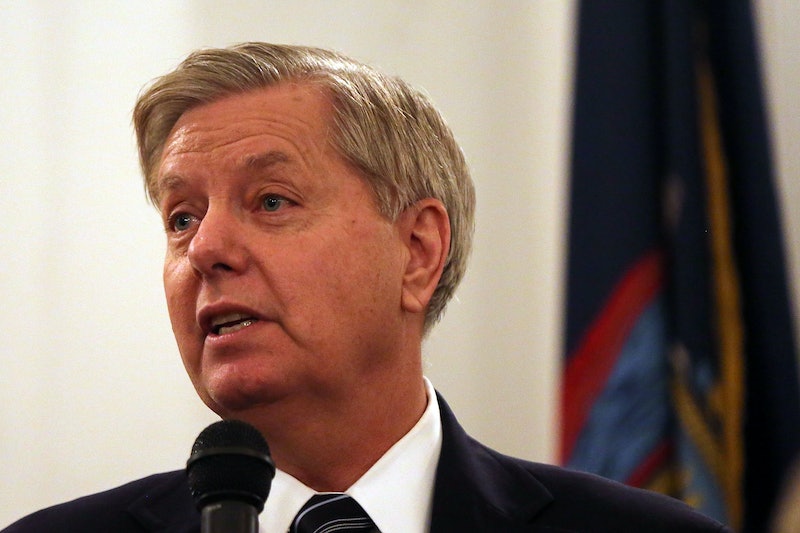 In an emailed statement to the press Monday, GOP frontrunner Donald Trump suggested that the United States ban Muslims from entering the country "until [the nation's] representatives [could] figure out" what was going on. A spokeswoman for the billionaire real estate mogul later added that the ban would include Muslim-Americans currently traveling outside the country. Backlash to Trump's statement was swift, with many of the candidate's fellow Republicans weighing in on the controversy with harsh criticisms. Of the GOP field, however, it was South Carolina Sen. Lindsey Graham's condemnation of Trump's comments which stood out as the most severe.

"@Realdonaldtrump has gone from making absurd comments to being downright dangerous with his bombastic rhetoric," Graham wrote on his official Twitter page Monday. "He's putting at risk the lives of interpreters, American supporters, diplomats, & the troops in the region by making these bigoted comments, [and] every candidate for president needs to do the right thing & condemn [them]."

In his statement, Trump claimed that Muslims posed a real threat to American citizens because of their support of radical jihadist beliefs, citing a particularly shaky study put out by right-leaning think tank the Center for Security Policy (CSP) in June. The study claimed that "[51 percent of] Muslims in America [believed they] should have the choice of being governed according to shariah" and that an additional 25 percent of Muslim-Americans believed that "violence against Americans here in the United States [could] be justified as part of the global jihad."

"Roughly 300,000 Muslims living in the United States who believe that shariah is 'the Muslim God Allah’s law that Muslims must follow and impose worldwide by Jihad,'" said CSP president Frank J. Gaffney, Jr. at the time. However, that premise was later proven to be highly flawed. While the CSP claimed that their numbers proved that over half of Muslims living in the country held jihadist beliefs, in reality, the group had only surveyed 600 self-identified Muslims — hardly an barometer for the nearly three million Muslim-Americans living in the United States.

The American Association for Public Opinion Research (AAPOR), which sets ethical standards for polling, additionally stated that "opt-in" surveys like the one conducted by CSP "[could not] be considered representative of the intended population." Thus, Graham's accusation that Trump's comments were "bigoted" and "dangerous" was not far off-base.

Whether or not he intended it, Graham, who has been lingering at the bottom of the polls since he first entered the race in June, was doing his own floundering campaign a favor. By angrily tweeting at Trump on such a volatile topic, he managed to capture the attention of the electorate on social media once more, reminding forgetful voters that he is still in the race and giving himself a much-needed burst of energy to keep his campaign afloat for a few extra weeks.

"Never in my wildest dreams did I think I would EVER agree with Lindsay Graham," wrote one Twitter user who was equally displeased with Trump's words. "From a sometimes-conservative Democrat, thank you for stepping up to protect the #GOP from Trump and his brand of hate," tweeted another user.