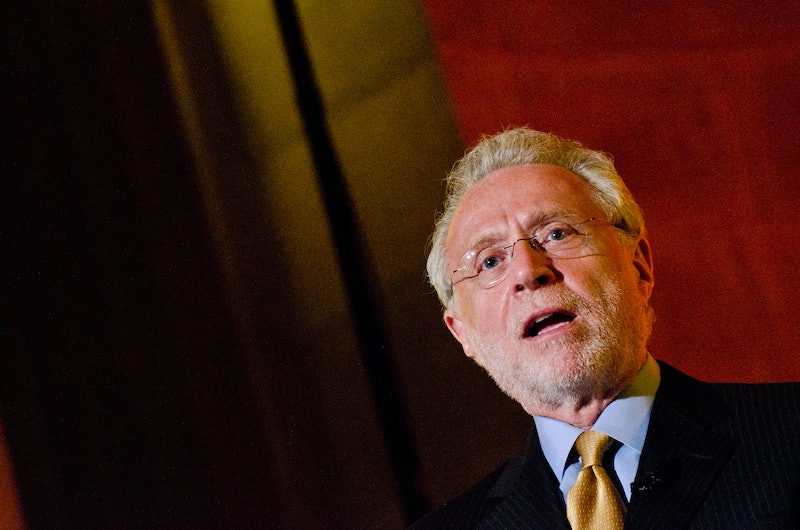 The next Republican presidential debate is just around the corner, and if the last few debates are any indicator, the moderators will receive a good amount of attention after it's finished. Whether that attention is positive or negative remains to be seen, of course; so far, various GOP debate moderators have received wildly mixed reviews from viewers and the candidates alike. So, who is Wolf Blitzer, the moderator of the next GOP debate, and what kind of forum will he lead?

Blitzer is a seasoned news veteran, and a natural choice to moderate the next debate. He began his career at a program for young journalists at Reuters' Tel Aviv bureau in 1972. That's not a bad way to start as a reporter: Reuters is a highly respected news agency, and Israel was a very important geopolitical hot spot in the early 1970s. One of Blitzer's first assignments was covering German Chancellor Willy Brandt's arrival in the country in 1973, the first time a German leader had visited Israel since the end of the Holocaust. Brandt's helicopter almost crashed upon landing; Blitzer beat his fellow reporters to the payphone and was one of the first reporters on the scene to break the story.

Thus began a long career in international journalism. Blitzer covered several important historical events during his first decade as a journalist, including the Israel-Egypt peace treaty negotiations in 1979 and the 1982 war in Lebanon. In 1990, he joined CNN, where his focus gradually shifted from international to domestic politics. This began with his coverage of the 1992 presidential campaign; since then, he's interviewed every U.S. president from Gerald Ford onward. Nowadays, he's host of The Situation Room With Wolf Blitzer and Wolf, both on CNN.

While Blitzer has received numerous awards for his reporting, he received jeers and mockery in 2009 after turning in a disastrous performance on Celebrity Jeopardy. Competing against Dana Delaney and Andy Richter, Blitzer ended the game with -$4,500; that's a terrible score for anybody, let alone someone who's job it is to report the news. That said, it's been pointed out that Blitzer has done well in other Celebrity Jeopardy episodes, so maybe this was just a fluke.

It's also worth pointing out that Blitzer, for all of his accomplishments, is not universally respected. He's openly pro-Israel, and at least one fellow reporter has accused Blitzer of letting this view cloud his journalistic judgement. Blitzer was also criticized for a recent interview with Black Lives Matter activist Deray McKesson; some felt that Blitzer's questions were designed solely to get McKesson to condemn black protesters in Baltimore.

Given the recent terrorist attacks in Paris and San Bernardino, there's a good chance the next GOP debate will focus heavily on foreign policy, and so it's not surprising that Blitzer — with his long history covering both international and presidential politics — was tapped to lead the forum. Whether or not the candidates appreciate his moderating will be another question entirely.