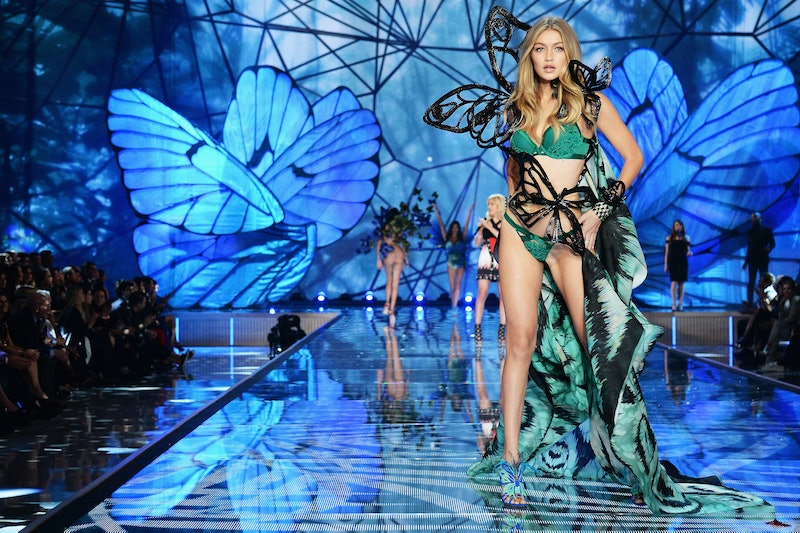 Gigi Hadid hit the Victoria's Secret runway for the first time this year, and she totally nailed it. Even if you are missing the show, you don't want to miss all of Gigi Hadid's Victoria's Secret 2015 fashion show moments. Each of her looks were totally distinctive, but she seemed equally comfortable and confident (and lets be real, hot AF) in all of them.

The fact that Hadid made it into this year's show is an extra big deal to the model. It turns out, she tried to land the gig last year, but the VS team passed on Hadid (because they're crazy). Luckily, Hadid's momma, Yolanda Foster, had some wise words for her daughter. According to Glamour, Foster told Hadid, "Hey, Gigi, that’s life, baby. We’re not always going to get what we want, and this is not a reflection of you, Gigi, as a human being. This is just redirection for you into something that’s going to be much bigger ... If it’s meant to be, it’ll happen at another time. It wasn’t meant to happen today."

Clearly Hadid took the advice to heart and made it happen just a single year later. Get it girl! Here are all of her looks from tonight's show.

OK, I don't know if I'd trust her to put out a fire if I called 911, but she looks red hot in this fun get-up. Also, how cute is that plush puppy?

And talk about those stilettos!

Ugh, how pretty are those tapestry-style wings?!

Do you think her arms were tired from those big wings?

Hadid was even majorly on point backstage in her super cute pink robe, bra, and hair net.

Can't forget to take a selfie!

OK, so this isn't technically part of the show, but it's worthy of talking about. The cut-out of her dress proves that you don't have to wear a naked dress to show some skin and look sexy.

How proud does her mama look!

I already can't wait to see Gigi Hadid in next year's VS Fashion Show!

More like this
Bella Hadid’s Low-Rise Yoga Pants Are Giving 2010s Victoria's Secret
By Dominique Norman
Why “Patch Snatch” Ponytails Are Everywhere Right Now
By Tomi Otekunrin
How To Style Your Hair For A Festival, According To Maya Jama’s Hairstylist
By Tomi Otekunrin
Why Sarah Jessica Parker Wanted Fans To Stop Calling Her Hair Choice “Brave”
By Brad Witter
Get Even More From Bustle — Sign Up For The Newsletter