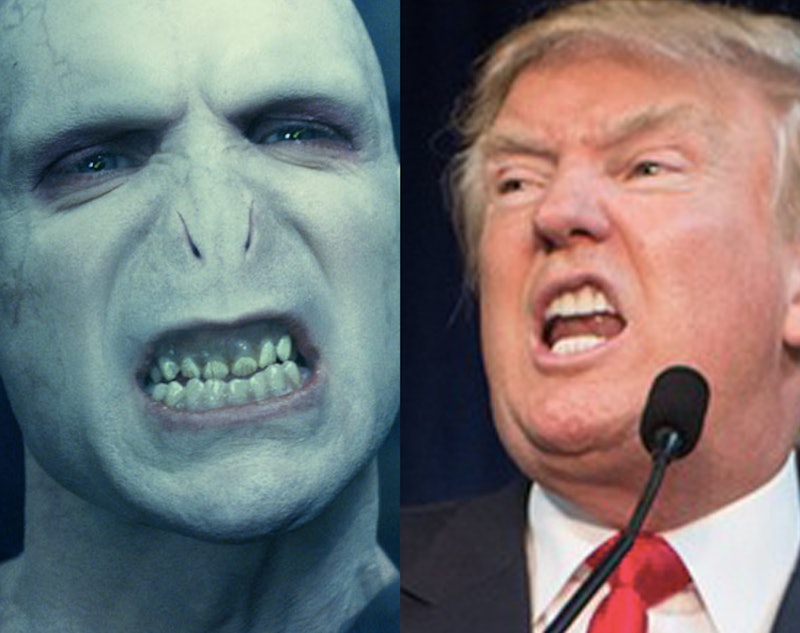 On Monday, presidential candidate Donald Trump unveiled the latest plan in his mounting fascist regime: a proposal to ban all Muslims from entering the U.S., including Muslim-Americans who are currently traveling abroad. Not surprisingly, Trump's plan has been garnering widespread criticism that range from diplomatic (David Cameron called it "divisive") to aggressive (Lindsey Graham told Trump to "go to hell"), but nobody delivered a better, or more accurate, jab than J.K. Rowling. In a tweet, the Harry Potter author bluntly stated that Trump was worse than Lord Voldemort, the evil, lizard-like archenemy of Harry Potter. It might seem like a frivolous comparison, but upon closer inspection, Donald Trump and Lord Voldemort are eerily similar.

Following Trump's emailed statement to the press proposing a "total and complete shutdown of Muslims entering the United States," many opponents started comparing Trump to the notorious Harry Potter villain. One Twitter user wrote, "My theory is that Trump is Voldemort & if the media stops saying his name, Harry Potter will come destroy him. America will be great again." Another commented, "Somehow, Voldemort managed to be less cartoonishly evil than Trump despite being a cartoon evil guy." However, it was Rowling who dealt the harshest blow. On Tuesday, she responded to the comparison by tweeting, "How horrible. Voldemort was nowhere near as bad."

Regardless of who's worse (but Trump is worse), the comparison is layered with some profound truth. One may be a real estate tycoon turned presidential candidate currently dominating the polls and the other might be a fictional murderous wizard, but here are seven ways the two are practically the same being.

They Both Had Wealthy Fathers

Voldemort was born Tom Marvolo Riddle to mother Merope Gaunt and father Tom Riddle Sr., a wealthy Muggle whose family owned more than half of the valley where the town Little Hangleton was situated.

Trump's father, Fred, was also a real estate developer who amassed a fortune estimated to be between $250 and $300 million by the end of his lifetime.

According to Rowling, Voldemort is a "raging psychopath, devoid of the normal human responses to other people's suffering."

Yup, you could say the exact same thing about Trump.

They Both Punish Anyone Who Dares Speak Of Them

When Voldemort took over the Ministry of Magic in 1997, he implemented a law that would punish anyone who dared speak his name, one of the many ways in which he controls with fear.

Trump delivers retribution to anyone who speaks ill of him, from Rosie O'Donnell to Megyn Kelly to a whole laundry list of people. He's also using fear to control the public discourse on him.

They Both Have Out-Of-Control Egos

Voldemort is a thoroughly ego-maniacal character whose own arrogance leads to his demise.

Trump is also known for his arrogance, which he shamelessly exhibited when he read the exact dollar amount of his net worth during his presidential campaign announcement.

Lord Voldemort is considered the most fanatic blood purist of his time who stripped wizards born to Muggles (non-magical people) of their wands and threw them into the streets. He also killed Muggles even if they did not have any relation to wizards, just because they were Muggles.

With his latest proposal, Trump once again wants to strip Muslims of their rights and is exhibiting fascist behavior that, if unchecked, seems to be heading toward outright ethnic cleansing.

They Both Have Legions Of Followers

Once he shed his Tom Riddle persona and became Lord Voldemort, the evil wizard recruited an army of followers known as the Death Eaters whose mission was to kill Muggles and crown Voldemort as the ruler of the Wizarding World.

Trump has also somehow recruited a powerful army of followers who consistently put him at the head of the GOP primary pack. For some indiscernible reason, these people want Trump to lead America.

The Might Both Be Destroyed By A Bespectacled Hero

Just as Harry Potter was the only one who could destroy Voldemort, perhaps Bernie Sanders is our only hope in stopping the evil Trump regime.

More like this
I've Read The Harry Potter Books 30+ Times & This Plot Hole Haunts Me
By Kelsey Stiegman
Does 'Locke & Key’s Ending Mean There Could Be A Season 4?
By Sophia Moore
'The Simpsons' Will *Finally* Address How They “Predict The Future”
By Sam Ramsden
The 'PLL: Original Sin' Creators Say A’s Identity Will Be “Very Clear” By The Season Finale
By Alyssa Lapid
Get Even More From Bustle — Sign Up For The Newsletter