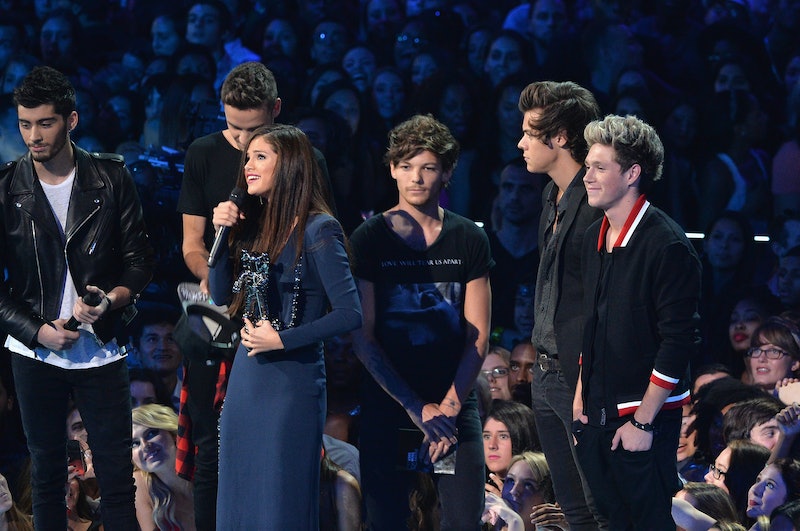 I don't like to just instantly assume two celebrities are dating because they're merely seen hanging out with one another. It's silly and presumptuous and I've grown up reading far too many untrue tabloid rumors to fall for things at face value any longer. So, when it comes to the possible relationship between Niall Horan and Selena Gomez, I still have my reservations. But I have to say, with new video evidence of the two together surfacing, it looks like they could potentially be together. And, in the wake of that, One Directioners and Selenators have been letting it all sink in — and it's been an emotional ride.

People says of the videos,

The pair were spotted enjoying a night out at Santa Monica Pier near Los Angeles on Saturday, one day after they were reportedly kissing and hugging at Jenna Dewan-Tatum's birthday party. Fans caught the singers riding roller coaster attractions together and playing at the game booths.

The publication also notes that they were with friends, so I guess there's always the benefit of the doubt that this was a platonic date. Regardless of that, in the video below, you can see the fans' wild reactions to seeing the two singers together. That enthusiasm (both good and bad) was not just reserved for those clips, though.

Fans in general have a lot to say on the matter, and you can view their rather strong opinions below:

There's Just A Lot Of Questioning

In the words of Bob Marley "every little thing is gonna be alright."

And Confusion As To Where They Stand On The Issue

It's just so new. For all of us. Take a little time to process before making any major declarations, fellow people too emotionally invested in the lives of celebrities.

Some Fans Are Already Theorizing About Their Social Media Moves

I mean, anything is possible.

There Are Fans Who Are Totally Setting Sail On This Ship

I have to say, I think I'm with them. They'd be totes cute together. Think of all the duets we could get!

Or Those Fans Who Refuse To Believe It's Even Afloat

It's OK. Maybe your AP Lang teacher is just really hip and with it. Don't be too hard on yourself.

Imagine the reactions if and when Horan and Gomez make it official? *Runs away* *Hides*

More like this
Selena Gomez Is Fine Being Single, But She Still Manifested Romance On 'SNL'
By Martha Sorren, Jake Viswanath and Jack Irvin
Selena Gomez Explained Why A Past Album Cover Made Her Feel “Really Ashamed”
By Grace Wehniainen
Justin & Hailey Bieber's Bond Is "Unbreakable" Amid His Ramsay Hunt Diagnosis
By Bustle Editors
Tanya Burr Is Expecting A Baby With Her Mystery Partner
By Maxine Harrison
Get Even More From Bustle — Sign Up For The Newsletter