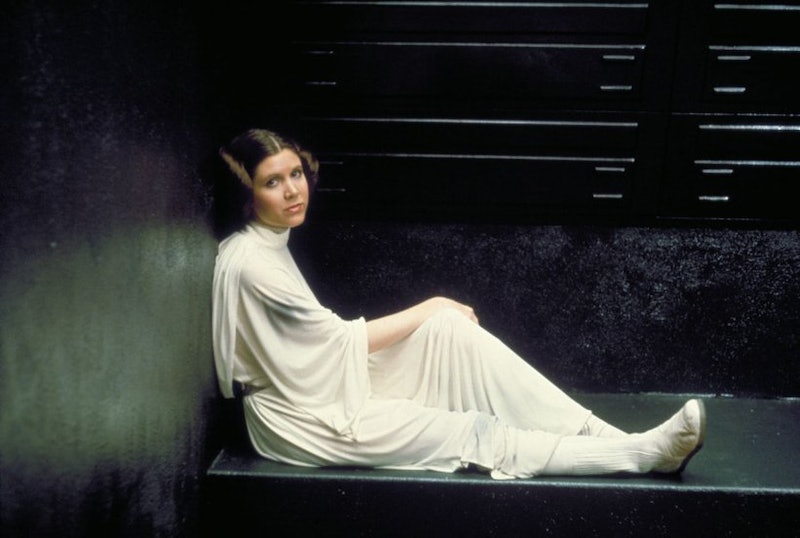 When it premieres next Thursday, The Force Awakens is likely to have more than a few Easter eggs for sharp-eyed fans. J.J. Abrams alluded in a recent Vanity Fair interview that he's considered killing off Jar Jar Binks (one of the most reviled Star Wars villains in the canon) and placing his skeleton atop a dune on a desert planet. "Only three people will notice it, ... but they'll love it," he said. But costumes and inventive alien creatures aren't the only souvenirs of the original six films — they're also rife with quotable lines and phrases that could be recycled for the third trilogy. In particular, these 11 original Star Wars quotes need to appear in The Force Awakens .

Star Wars' dialogue is so campy-memorable that it's even spawned a holiday: Star Wars Day, May the Fourth (be with you). And though "May the Force be with you" has become one of the franchise's most frequently quoted line, it overshadows many other lines that more subtly allude to Luke Skywalker and co.'s long history of saving planets and slaying stormtroopers. When Episode VII bows next week, these TK quotes will hook loyal fans and send newcomers hurrying home to the original films.

Spoken by Darth Vader in A New Hope, "The Force is strong with this one" may be the most memorable Star Wars quote after the well-wishing "May the Force be with you." Star Wars fans just love the Force.

In The Empire Strikes Back, Yoda advises a hopeless Luke by telling him, "Do, or do not. There is no try." Though Yoda may be gone, this quote survives him.

As the official Star Wars site notes, pretty much everyone in the franchise says they have a bad feeling at some point in the series. Probably because everything goes wrong, and our heroes have to fix the galaxy far, far away.

This one has been spoofed and parodied innumerable times since it debuted in Return of the Jedi, and it even titled a Family Guy episode during which the Griffins perform a retelling of the film. The Force Awakens could poke a little fun at itself by quoting Admiral Ackbar.

Though she claims Obi-Wan Kenobi is her only hope in A New Hope, it turns out Princess Leia is just as capable of acting as her own savior. It might be nice to gender-swap this line for The Force Awakens.

If this isn't the first thing on the screen come Dec. 17, Star Wars fans around the globe might descend into open revolt.

7. "These Aren't The Droids You're Looking For."

For best results, "Droids" can be substituted for any plural noun.

"I don't know where you get your delusions from," Leia says to Han Solo in The Empire Strikes Back. Their wookiee companion Chewbacca lets out a yap of glee and Han turns to him, telling him to "Laugh it up, fuzzball." Since Chewie will be back in Episode VII, his nonverbal spars with Han will also be a welcomed return.

The most scathing diss in all of the Empire. Leia refers to Han Solo as a scruffy Nerf herder, which seems like an expression with a lot more potential than "fetch."

Endearingly anxious droid C3Po won't stop complaining in The Empire Strikes Back, so Han Solo proposes a harsh fix. C3Po will be back, and with it, the potential for this double entendre and so many more.

11. "Someday I Will Be The Most Powerful Jedi Ever."

Bold words from Anakin in Revenge of the Sith. Kylo Ren, take note.

Though there are many quotes we hope make it into the new movie, we should also keep our fingers crossed that Han Solo doesn't continue to refer to Leia as "sweetheart," and that Jar Jar Binks references stop at his skeleton in the desert. With one week to go, it's a bit late for the filmmakers to take these suggestions into account, but a girl can hope.