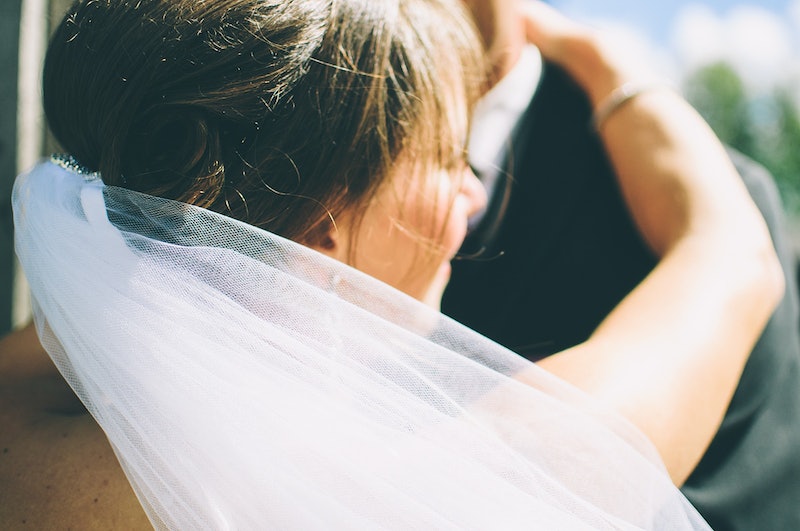 For those of you whose date is fast approaching, the decision to get married can seem easy compared to all the choices you've had to make once the wedding planning begins. It can be difficult to walk the line between honoring tradition and still making the marriage ceremony your own. Especially when it’s hard to discern which traditions have their roots in history, and which are fabricated by the consumer monster that is the billion-dollar wedding industry. Many of the traditions we think of sweetly today are actually rooted in superstition and the less than female-friendly history of marriage. Things we associate with weddings — a diamond engagement ring, a white dress, a flower bouquet, and a bridal veil — may have varied and distinctly patriarchal origins. These days, most brides are worrying about the caterer (they better nail those canapés!) and hitting refresh on their weather app, wishing away possible thunderstorms. A far cry from brides of the past whose primary concerns centered around being abducted or having their clothes ripped off by their guests on their "special" day.

So thank goodness that a “traditional” ceremony is not necessarily the norm. Weddings can take many forms, and most religious institutions now allow for some degree of “à la carte” ceremony, couples choosing what is meaningful to them to include in the service. We have more control over the experience than ever, which is awesome, but weighing every small decision can also be extremely overwhelming. Before you decide on what your ceremony may look like, it is extremely helpful to know where these traditions originated. Behind every beautiful ring and the dream of having a parent hand you off to your beloved, may lie the dreaded words “dowry” or to “serve and obey." But by better understanding the history of these traditions, you can better define them not by their pasts, but by what they personally mean to you:

The use of rings to signify a commitment to be married was first introduced with Pope Innocent III's 1215 decree that there should be a waiting period between betrothal and the actual wedding. In the past, these were simple unadorned bands, but now, dropping a big chunk of change to buy the diamond engagement ring we have come to associate with love and commitment is considered the norm. This engagement ring, as we think of it today, only dates back to a 1930s De Beers ad campaign.

De Beers has brilliantly controlled supply and demand of diamonds dating back to 1888, when the market became flooded with these shiny rocks after the discovery of profitable mines in South Africa. The image of a diamond as precious and scarce would have been ruined if not for the "Diamond is forever" campaign, and the intense marketing over the 20th century. De Beers changed the way the public thought of diamonds, touting them as an investment (which they are not, as they are incredibly hard to resell) and as the only symbol of everlasting love.

The wedding veil today is a fashion accessory and seen as the crowning touch of the bridal ensemble. But veils only became a fashion and status symbol in the Victorian era, when having the longest and heaviest veil and train was restricted to the royal or very wealthy. The act of wearing a veil itself most likely dates all the way back to the superstitions of the ancient Greeks and Romans (where many of our wedding traditions surprisingly originate).

The bride was seen as vulnerable to evil spirits on her wedding day and a brightly colored veil was worn to protect her from (or scare away) demons. The veil also shielded her face from the groom, so that in arranged marriages, it would protect her and her family from any embarrassment if he did not like the way she looked (remember the switcheroo of Rachel and Leah in the Book of Genesis?). The veil was then coopted as a religious symbol of modesty and piety before God, and is used in ceremonies that take place in religious institutions. But wouldn't protecting brides from evil spirits make Say Yes To The Dress even more exciting?

Turns out, those pretty floral arrangements grew out of a dark time in history. Brides originally clutched bundles of garlic, dill, and other herbs on their special day, but it's not because they needed something to do with their hands. It is thought that the tradition of the bouquet started in the time of the plague, when people would hold bundles over their mouths and noses, praying that their protective powers would save them from evil spirits and help them survive the brutal epidemic. Eventually the more fragrant addition of flowers was made, and each developed a different meaning, from a lily for purity to a peony for happiness and prosperity.

The white wedding dress is seen as a traditional symbol of virginity and purity, and this can produce all kinds of hang ups in the modern bride. However, history might be helpful when asking the question, "Can I wear a white dress?"

In the biblical days, brides and grooms wore blue in their wedding attire as a symbol of purity. The Virgin Mary is usually depicted wearing a blue dress. White was seen as a color of mourning up until the fifteenth century. In the Middle Ages, brides would simply wear their best dress, despite color, along with any expensive furs or accoutrements, as showing off wealth was more important than the idea of purity (kinda like today?). Two queens are credited with starting the white dress phenom: Queen Anne of Brittany wore a white dress to her marriage of King Louis XII of France in 1499 (her second marriage!), and Queen Victoria brought back the custom and popularized it during her marriage to her first cousin Prince Albert in 1840. So, basically, wear the dress that makes you feel the most beautiful, and who cares about the color!

If the tradition of hiking up your dress and tossing a piece of lingerie at your grandma sounds weird — it is. What is now a "sexy" ritual started out as a way to protect the bride from being assaulted by her guests. In Medieval England and France, it was customary for the bride and groom to consummate their marriage directly after the ceremony in an adjoining room. There was a custom called "fingering the stocking," where guests would visit the bridal chamber to check if the marriage had already been consummated. In France, brides had even more to worry about, as it was common practice for guests to rush her at the alter, hoping to snag a piece of her dress for good luck. To prevent the bride from being battered and stripped, the garter was thrown to pacify the crowd.

There is some dispute over how far back "giving away" the bride goes. Some believe it dates back to Ancient Greeks and Romans, where the bride needed to be ushered through her wedding ceremony because she could not see through her veil. Also, remember the evil spirits she has to be protected from!

But whether that is the true origin, brides were more commonly "given away" by their father as a business transaction. Women were considered property and the groom was expected to pay the family for ownership of his future wife. The women were simply a bargaining chip to consolidate wealth and land, or ensure a peace agreement between parties. Hence, the father transferred ownership to the groom by handing his daughter off. Today, the father walking the daughter down the aisle is more symbolic of giving the family's blessing to the union. However, many modern brides are choosing to eschew this patriarchal tradition and to either walk down the aisle by themselves, or have both parents (or other close family) escort her instead.

Today, being a bridesmaid or groomsmen means getting the bride/groom-to-be wasted, possibly hiring a few strippers, and spending precious $$ on awful look-a-like dresses that you will never wear again. But traditionally, the wedding party had a much more important job. The role of the "best man" most likely was originated by the Germanic Goths. Bachelors at times had to kidnap eligible women from neighboring communities, and refresh the isolated bloodlines. The best man would act as the groom's armed backup when stealing the bride-to-be. This remained the case through 200 A.D., when the armed best man would stay with the couple through the ceremony and stand watch outside their chamber during the consummation of their vows to protect against the threat of the bride's disapproving family. "The 'best' part of that title refers to his skill with a sword, should the need arise," explains the blog Mentalfloss. Today, the best man has been unarmed, except for his embarrassing toast of course!

Bridesmaids also had an important duty to ensure that the marriage took place. It was customary for them to dress the same as the bride, so that no evil spirit or ex-lover might fixate on her, and disrupt the union. This was the case throughout Victorian times, though the bridesmaids were differentiated by wearing short veils instead. Now, we worry about upstaging the bride, but you won't trick those evil spirits with ill-fitting lime green taffeta or frilly fuchsia!

9. Carrying The Bride Over The Threshold

Romans carried their brides into the house to protect them from evil spirits in the floor (talk about sensitive feet!). And in the days of "marriage by capture," the bride was essentially carried over the threshold against her will. When virginity and purity were thought most important in a young bride, the newlywed women were not supposed to seem too willing to enter the bridal chamber. Hence, the husbands "encouragingly" carried over the threshold. But thankfully ladies, this tradition's fraught emergence doesn't mean you can't get a free piggy back ride when you so choose!

All facts aside, it's your wedding and you can do what you want!

More like this
Myra Magdalen Is TikTok’s Queen Of Chaotic Maximalist Fashion
By Sophia Moore
The Best Time To Date After A Breakup, According To Experts
By Bustle Editors
10 Breathable Bedsheets To Keep You Cool During The Heatwave
By Orla Pentelow and Sophie McEvoy
Linda Evangelista Leads Tributes To Iconic Fashion Designer Issey Miyake
By Sophie McEvoy
Get Even More From Bustle — Sign Up For The Newsletter