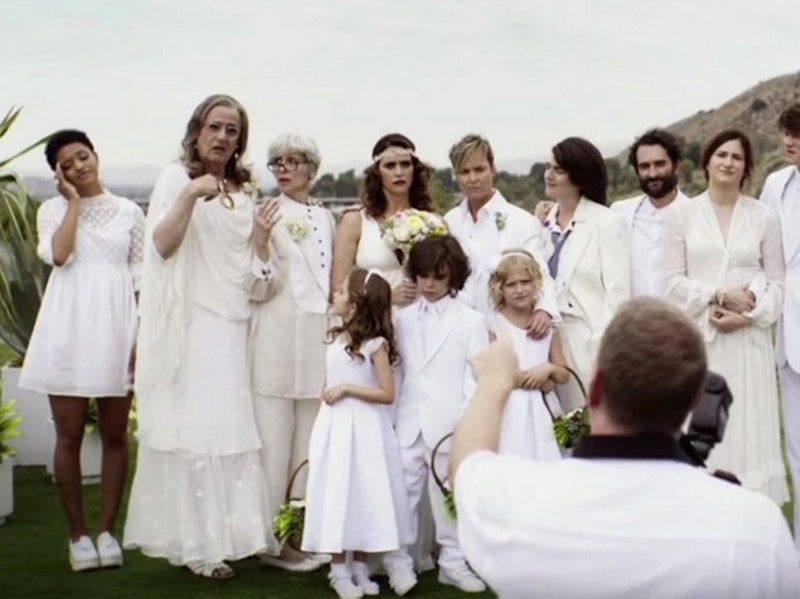 While all 10 episodes of Transparent’s second season will be on Amazon Prime starting Friday, Dec. 11, fans were tantalized a couple of weeks ago when the Season 2 premiere dropped ahead of the rest of the season. The episode, “Kina Hora,” following Sarah and Tammy’s wedding was so satisfying that it had Transparent viewers (like me) jumping the gun and asking, “When will Transparent Season 3 premiere?!”

Luckily for all of us, Amazon has already renewed Transparent for a third season, slated to be available sometime in 2016. Perhaps in September like Season 1 or December again like Season 2? Since Season 2 just came out, Season 3 will be a wait away. But, if the second season premiere is any indication of what’s to come, it seems like there is more than enough material to fill many more seasons with Jill Solloway’s modern, American family. There are so many directions the show could go.

Here are all the roads we hope Transparent Seasons 2 and 3 (and beyond!) will explore, based on the Season 2 premiere episode. Spoilers from “Kina Hora” ahead!

OK, big spoilers ahead, if you watched “Kina Hora” you know that Sarah had a pretty desperate meltdown in the bathroom at her own wedding because she did not want to be married to Tammy. After realizing that her wedding was not yet legally binding, it would appear that the much-relieved Sarah would probably not be moving forward with her nuptials. So, what does this meaning for Tammy and her web of exes? Will Len come back and be reunited with the Pfefferman clan by Season 3?

Season one ended with Josh meeting his and Rita’s lovechild, Colton, and, in the last scene, Colton was introduced to the family. Well, Josh’s son is in attendance at Sarah’s wedding, but he is probably going to be overshadowed by Josh’s new baby with Rabbi Raquel. How will Josh balance all of his love children?

Though they were mostly apart in Season 1, I am really enjoying seeing these two as an old married couple. Shelly seems to understand and accept Maura in “Kina Hora,” calling her beautiful and loving her ex-spouse for who she really is. I love seeing this relationship age and continue to grow.

OK, Who Is The Woman From The Flashback?

Flashbacks have always been a staple in telling the Pfefferman family story. But, “Kina Hora” took it further back than we have seen before, to Berlin in 1933! The flashback depicted a raucous, none-gender conforming party in 1933 with the focus on a trans woman, played by trans actress Hari Nef. This character is connected to the Pfefferman family and probably Ali, considering her appearance on the balcony with Ali in the episode’s final scene. My guess about the woman in the flashback? She is connected to Maura’s mother Rose. We hadn’t heard much about Maura’s family before this episode, so the introduction of a mother and the tendency for the flashbacks to follow family has me guessing that Rose may have experienced having a trans relative or friend before?

Maura And Her Mother

With a possible developing plot for Rose in 1933, I am excited to get to know more about Pfefferman family history. But, I am also anxious to see Rose meet her daughter Maura in 2015.