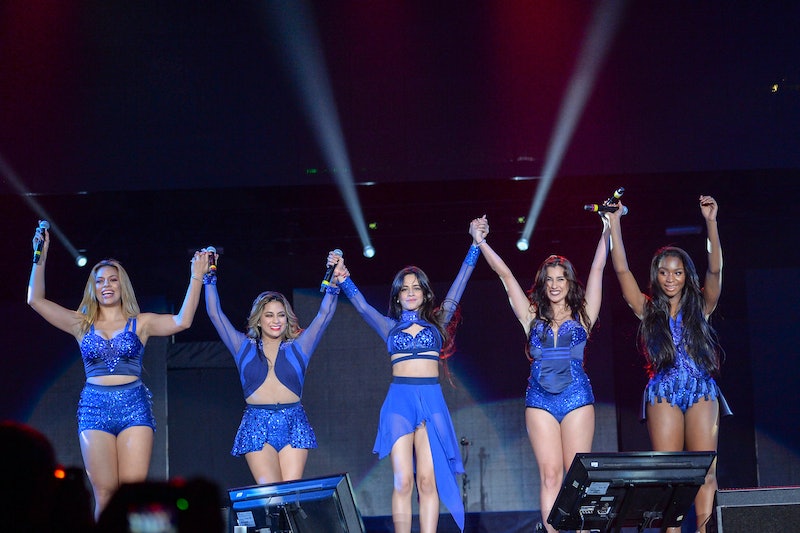 If the recent revelation that Fifth Harmony is breaking up (eventually) has hit you hard, I have some news that should brighten your day: Fifth Harmony's new album is almost finished. Yes, although the group just began working on their sophomore LP at the end of September, member Camila Cabello said they're already entering the "last days" of the recording process during a recent interview backstage at the KIIS FM Jingle Ball concert. That oughta turn your frown upside down!

Cabello also said that the band just cut a new track that she's especially pumped about: "There's this one song that we recorded today that I'm really excited about because, lyrically, I think it's the best of the entire album. I can't say the title, but I'm really excited about it, and it's going to come out pretty soon, which is going to be fun."Whoa. This is not a drill, Harmonizers: A new Fifth Harmony single could be coming our way "soon"!

Now, pop music fans tend to bristle when artists use the word "soon" because it's so frustratingly vague (and because we've been let down a lot in the past), but I'm going to do my best to stay positive here. I need some new 5H jams in my life, and I need 'em bad. Here's what we can expect from Fifth Harmony's new album:

When it comes to their second album, Fifth Harmony are not messing around. According to Billboard, the group recruited some of the biggest hit-makers in the music industry to work on the forthcoming project, including Norwegian production duo Stargate ("Worth It," Rihanna's "Diamonds"), Mitch Allan and Jason Evigan (Demi Lovato's "Heart Attack"), and pop music virtuoso Max Martin (The Weeknd's "Can't Feel My Face").

5H had their first taste of chart success earlier this year with "Worth It" (the song peaked at No. 12 on the Billboard Hot 100) — and it seems clear that they're hungry for more.

5H member Lauren Jauregui told Billboard at the beginning of October that the band's new album would be more mature than their debut effort, Reflection. "For starters, we definitely want to mature in terms of our lyrics and content," she explained. "Although [on the first album] we touched upon a bunch of subjects that we definitely agreed with and are very relevant to us, like girl power and self-love, hopefully this time around we can have some more vulnerability, some more ballads and mid-tempo type [songs], to balance out this album. We want you to sit through it and feel a roller coaster of emotions."

Member Dinah Jane Hansen echoed Jauregui's statements when she told SPIN at the end of October that their new songs show off who they "really" are "behind closed doors." "We're writing [about] our own experiences about love and everything, stuff that's actually what's going on right now," she said. "We're all 18, 19, 22, so a lot is going on in our lives."

A little artistic growth sounds good to me!

When describing the sound of Fifth Harmony's new material to Billboard, Jauregui said: "The whole R&B, urban, Destiny's Child vibe? We're definitely going to try and hone in on that this time around. We've recorded some dope songs already, some really sick tracks with crazy horns all over the place."

Originality is important, yes, but I definitely don't have a problem with 5H looking to Destiny's Child — one of the best pop/R&B groups of all time — for a little inspiration! I can't wait to hear what they've cooked up in the studio.

With any luck, Fifth Harmony will share more details about their upcoming album before the end of the year. Stay tuned.