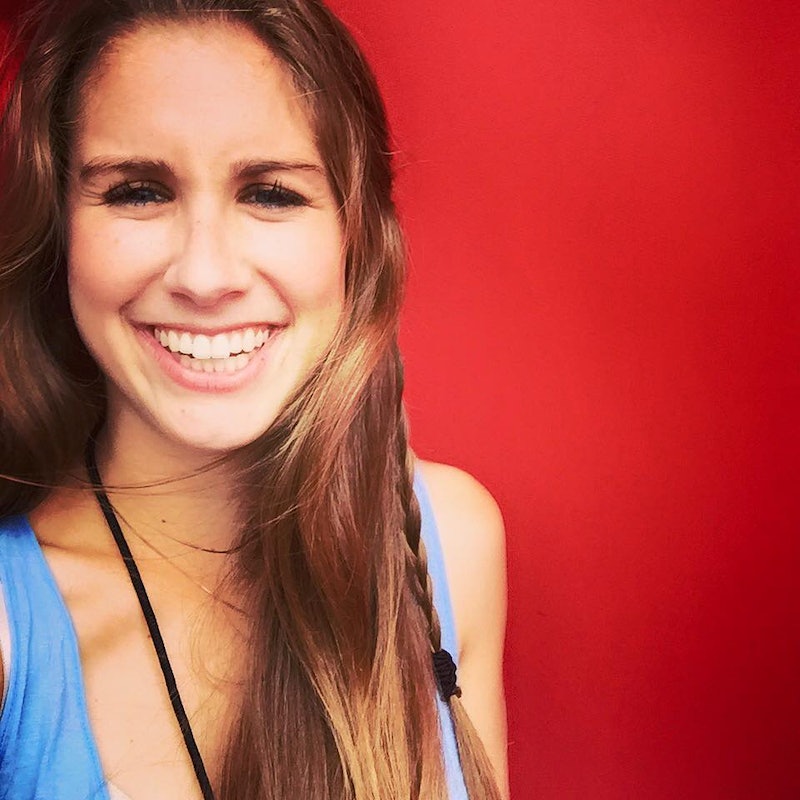 A lot of things happen when you look younger than your age, like I do. I'm 24 years old, but I get carded everywhere I go. I’ve been told not to get more tattoos for the sake of preserving my appeal to those who fetishize teenyboppers (true story). I’m often asked what high school I attend. But perhaps the most common thing is random, unknown men calling me things like “sweetheart,” “dear,” or “honey” all the time. And I'm sick of it.

To clarify, these men are not necessarily calling me these nicknames in an effort to sexualize me — at least, not overtly. I’m not talking about the men who catcall me on the street or hit on me in bars. I’m talking about cashiers at the grocery store, about cab drivers, about waiters. They believe that these pet names are not only harmless, but that they’re nice. That they’re flattering.

It’s important to note that though I do occasionally hear similar comments from women, it is always in a different context. The women who have called me “sweetheart” are always elderly, and always use it in a way that feels grandmotherly instead of disrespectful. Much like other phrases we might take back as women (like the c-word, or "bitch"), this one simply carries a more loaded meaning when it's spoken by men. Here's why.

These pet names are essentially a socially acceptable way of saying "Aw, look at you, you cute little female thing.” Though not necessarily sexualizing, calling someone "sweetheart" is still objectifying in the sense that it asserts that women are there to be projected upon.

Calling us "sweetheart" still conveys the message that it doesn’t matter who we are, what we do, or what we want — it matters what we look like. It matters what these men see in us (in this case, someone young and cute), instead of what we see in ourselves.

2. It’s A Subtle Method Of Domination

When men refer to us in this way, they are creating a subtle shift in power dynamic. These types of comments alter an interaction from one between two equals to one between a stronger and a weaker individual. In one comment, the man is reducing us to being sweet and soft, instead of powerful and legitimate.

3. It Creates A False Sense Of Intimacy

To refer to me or any other unknown woman as “sweetheart” says that you believe you have the automatic right to familiarize yourself with us. When said by a man who knows me and cares about me — a boyfriend, or my father — such a nickname speaks to the relationship we already have established. But when I hear these comments from people who don’t know me, it suggests that any man has the right to be intimate — whether mentally, emotionally, or physically — with me, regardless of my own level of participation.

Would these men call me “sweetheart,” “dear,” or “honey” if I was male? Better yet, would these men feel comfortable having an unknown woman refer to them as “little slugger,” “babe,” or “darling?" I’m inclined to say no. I definitely would not feel comfortable calling unknown men by intimate nicknames, nor would I expect them to be comfortable hearing it. I have never once heard a man call another man any of these names.

5. It Reinforces The Male Gaze

I genuinely believe that these men don’t realize the implications of these comments. That they likely assume we would be flattered. That because we are women, we would aspire to catch male attention in this way. That we want to be seen as sweet, sugary, and soft. That being female directly correlates with a desire to be applauded by men for exhibiting traditionally girlish behavior — even if we’re just being friendly.

But we don’t like it, and we don’t care what you think about us, and we don’t want to be made to feel small. So please, would you just stop?

Glad we had this talk.