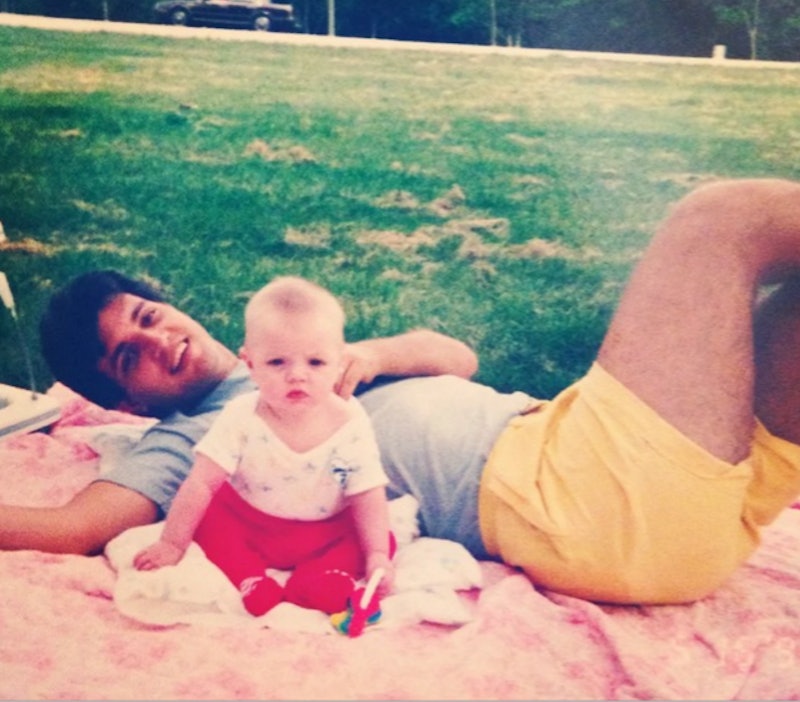 My father began his journey as an American immigrant on August 21, 1983. He was a dark-complexioned Arab graduate student with stammering English. On his first day in the U.S., he was shortchanged by a taxi driver, locked out of his dorm, and left to wander alone into his first Burger King. He was dazed and displaced, but these feelings were not new. My father was born a refugee in the Gaza strip, and in his 23 years 'til that point, he had never known a permanent home.

To be a refugee is to be a ghost. You carry with you a silent history, a past life, and you seldom speak of it. You drift, haunted and timidly hoping to rebuild some of what you lost. You grip your dignity close, but you cannot escape the fact that you're always a guest, standing on someone else’s ground, to some degree dependent on the graciousness of others.

Despite this, my father silently hoped that everything he believed about America was true, that it would deliver on the promises he’d seen on TV screens and heard about in awestruck conversations. America, "Land of the Free."

My father wasn't too proud to start at the bottom. He sat through endless hours of English lessons, fumbled his way onto city buses, forced himself to ignore sidelong glances and snickers. He shaved his mustache, ate heartily off cafeteria trays, and discovered MTV. When he was overcome with homesickness, my dad stuffed quarters into a cold metal box and called his father. “God has given you a gift," my grandfather would say. "America is your chance. You cannot turn back now.”

He knew his family lived with less than ever — scraping and saving, staking their hopes and prayers on him. His mother was forever bent by war. His father was a broad soul full of soured dreams.

He met my mother, a blonde daughter of Middle America. Between them was a warmth, and from them came a future — my future. I was born in America, the nation my mother knew as normal, and which my father called magical.

After me came three siblings. With each of their births, my father's love deepened, and his dreams for us grew. I was raised on Fourth of July barbecues and Christmas trees, Ramadan and Eid festivities.

On our bookshelf was a globe. My father often pointed to a scrap of land on the opposite side of it from our home and said, “Before America, Daddy came from here.” He always added, “God bless America.”

In 1994, when my father was 34 years old, he became an American citizen. He wore his best-fitting suit, the one that made him feel proud inside his brown body. He volunteered to lead the Pledge of Allegiance, but the officer chose a different raised hand. He was disappointed, but it didn't matter — that day, he officially became a son of the United States.

He always beamed when he held that slim blue passport. His strong fingers turned the pages so gently. That palm-sized object was the key to his new world. He belonged.

My father's heart broke on 9/11. He grieves over ISIS and Boko Haram, his blood boiling at these sick impostors of Islam.

“I’m afraid to go to the mosque,” says my father, who loves to pray. “I’m worried about my children.” I tell him we’re alright, but his responding sigh is thick and long anyway. “But Sarah, how could they? This is ... America.”

When Donald Trump called for a ban on Muslims immigrating to this country, and thousands echoed their support, my father was devastated, disbelieving. His voice was charged with fear and frustration as it cracked across the phone line.

"How dare they make us afraid." he said to me. "Isn't this what ISIS wants — a war?” He feels his country's betrayal like a blade in his back, a slap in his face. “I’m afraid to go to the mosque,” says my father, who loves to pray. “I’m worried about my children.” I tell him we’re alright, but his responding sigh is thick and long anyway. “But Sarah, how could they? This is ... America.”

He’s always believed in this country more than anyone I know. Faith still sustains him. He says, "‘agal w tawakl” — "Be wise, and trust God." His voice is edged with pain.

The spiteful voices say that they want to “make America great again.” They don’t know half of what my father knows about how beautiful this country can be. Misguided fear creeps across the nation like a frost. “America has been good to me — I am forever grateful,” he says, “But I don’t know if I can stay.”

Even he has his limits. The blunt anger, the competing rhetoric of hate — they burn away freedom like acid, leaving acrid embers where his hope once was. And in this cruel game of politics, the most vulnerable people — refugees, the homeless, the haunted ones — are the target.

To be a refugee is to always wonder how long you have until you’ll be forced to move. My father thought his orphan days were finished. He clung to his blue passport like a lifeline and defended America to his cynical colleagues. He kneels each night to pray and asks Heaven for peace, for one more day of home. He goes to sleep each night and holds lightly to his dreams.