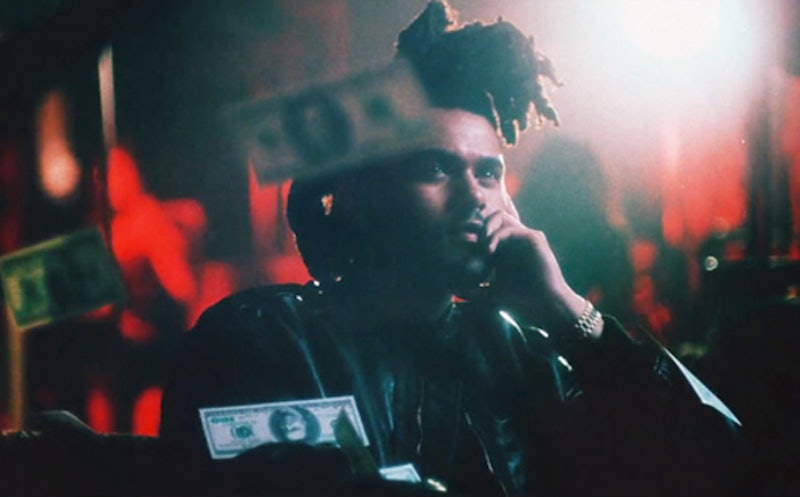 If there's one thing I love more than pretty much anything else, it's good music. With that in mind, it's probably no surprise that I've been a fan of The Weeknd (real name Abel Tesfaye) ever since he released House of Balloons back in 2011. His sultry blend of pop, soul, and what the kids are calling "PBR&B" — or "hipster R&B" — is unlike anything that any other artist on the scene is doing right now, so it's no surprise that his fame has skyrocketed in the past year or two. His latest album, Beauty Behind The Madness, was one of the best of 2015, without a doubt, and his latest single "In The Night" is one of the best tracks from it. It gets better, though: The Weeknd's "In The Night" video is finally here, and it's full of '80s goodness and, of course, loads of debauchery.

The clip is, admittedly, a bit of a drug-fuelled journey through a grindhouse movie, with strippers, dodgy characters, rain storms, and blood. Oh, and his rumored girlfriend, Bella Hadid. It's all very dramatic with a vintage edge, and it's pretty great. Generally speaking, I'm not much of a music video fan, but there's something about The Weeknd's uniquely warped approach to storylines and visuals — and yes, I mean that as a compliment — that makes them totally irresistible.

Don't believe me? Here's some proof of just how good this video is:

We're only a few seconds in, but already so much is happening and I have no idea what it's all about. The Weeknd knows how to relay a sense of anxiety rather effortlessly, so you know what's coming has got to be good.

We don't know who this guy is, but from that quick flash of a man I assume is him in pretty bad condition, something tells me that whatever's coming to him isn't going to be good. What's going on with this video? I still don't know, but I love it.

A Crime Of Passion?

Why does Bella Hadid have that gun? Why is she wearing red leather? Does it even matter when the visuals are so delicious? I don't think so. What I do think is that she's one of the "dancers" The Weeknd refers to in the song who needs to escape and this is the only way. Gruesome, but fascinating to watch.

Singing In The Rain

I mean, it doesn't get more literal than that. The rain here adds to the intrigue and drama of the whole thing, don't you think?

Bella Hadid Is So Pretty

I mean, I guess that's why her name is Bella? She's really pretty! And she's in a bad situation! And The Weeknd is her boyfriend (maybe? probably?) and he put her in his video!

This is where we're told that BRTHR directed the clip, and kudos to whoever that is, because he/she/they did an amazing job. (In actuality, it's two guys named Alex Lee and Kyle Wightman, and they're awesome.)

To watch the full "In The Night" video — which, to be honest, is pretty racy — click play below and enjoy: