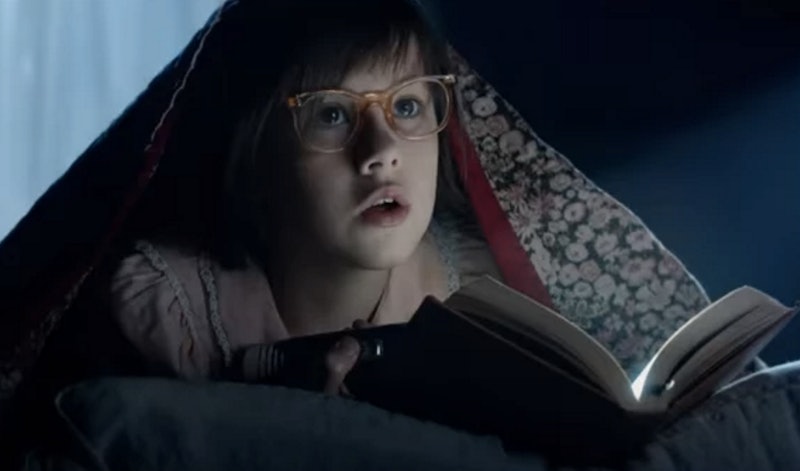 Roald Dahl is a classic staple of American childhood. His books have been read in classes, by parents, and plastered over the walls of every elementary school library — and for good reason. Dahl's stories are chalk full of childhood imagination and wonder, and it makes sense that many of his books have been adapted into film classics as well. Recently, Hollywood is taking a crack — again — at the book The BFG. The last film adaptation was a 1989 animated flick, but this new one will be live action. The BFG teaser trailer is everything, and, if you weren't thinking of watching the movie before, you definitely will after seeing the teaser.

The film is directed by Steven Spielberg, written by Melissa Matthison, and will star Rebecca Hall, Mark Rylance, and Bill Hader. However, the real star of the trailer was newcomer Ruby Barnhill, who, by the looks of this trailer, is on her way to a fruitful career as an actress. Barnhill will play Sophie, an orphan who reluctantly befriends the BFG (Big Friendly Giant) as the two adventure to stop the other giants who eat little boys and girls. While the trailer only touches on the surface of the plot, there is enough excitement to keep you on edge for the whole two minutes of it. Here is the breakdown of the best 11 moments from the The BFG teaser trailer.

1. The Scenery Makes The Movie

The trailer opens on a city night with lots of quiet music playing in the background. It is clear that the scenery is going to play just as a big a role in this film as any of the characters. I also love that this orphanage is so straight forward with what it is.

The trailer is narrated by Barnhill's character Sophie, and she tells us about "the witching hour." It's the hour where all of the things that go bump in the night come out to terrorize children. According to the other children, the witching hour strikes at midnight. However, Sophie tries to be proactive and turn the clock to midnight early.

Like a good little girl, Sophie decides to stay up and read instead of going to bed. For a second, you believe that maybe all will be right in the world, and this will be a beautiful film about a little cautious orphan girl who is an avid reader and has a heart of gold. However, she soon hears the spooky sound of breaking glass, and the trailer takes a turn for the scary.

4. Getting Out of Bed

5. Going to The Window

Well, it was nice knowing Sophie while it lasted. At this point, I have no hope of Sophie's safe return to bed.

What's behind the curtain? None other than a steamy street alley, and a giant creepy hand reaching beyond a hidden corner. I'm not sure why that wasn't enough to prompt Sophie to swiftly return to bed, but, apparently, this girl likes to live on the edge.

This shadowy figure in the alley way could have been something other than a giant, but I would have gone back to sleep anyways. Not Sophie. She needs to know exactly what is in the alley before she decides to run for her life.

Despite being a grown woman, this image gave me chills. This shadowy figure is enough to scare the crap out of anyone, so I'm not sure how a little girl wasn't scared to death at the sight of it.

We get to see this little glimpse of the BFG in the trailer. He looks so life-like it's kind of scary, but really cool at the same time.

I don't think there is anything scarier than watching a small child run from a 7 foot figure in the night. Sadly, Sophie's mistake was that she forgot to close the window before running back to her bed.

This is by far one of the scariest things I have seen in a long time. Luckily, I am no longer scared of the dark, or this might be a long night ahead. The trailer leaves us with this scene before it officially closes out. It's a great shot that leaves you with a lot of excitement for the movie and the trailers that are sure to come beforehand.