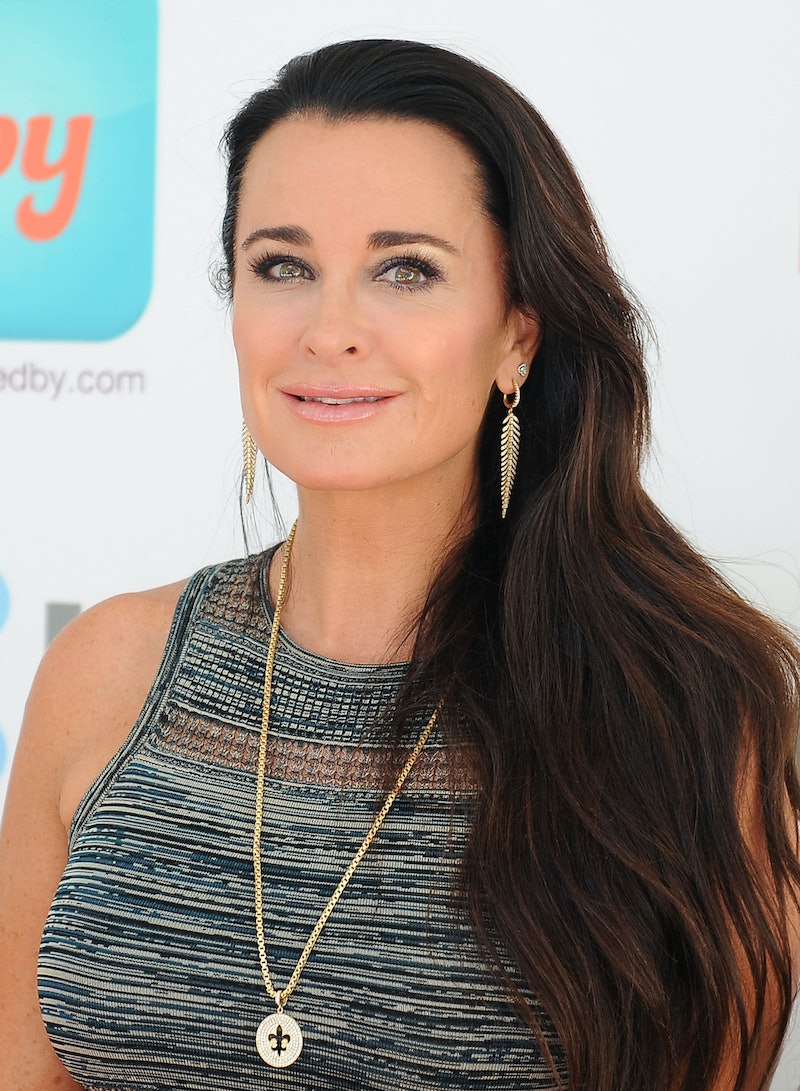 It's well known that the ladies of The Real Housewives of, well, every city aren't afraid of trying the latest and greatest beauty treatments. They dabble in everything from vitamin injections to fillers and plastic surgery to modify their famous faces. But Kyle Richards of The Real Housewives of Beverly Hills says she's not into extremes when it comes to plastic surgery and looking younger.

Richards, 46, told People how she feels about the lengths many of her acquaintances will go to modify their appearances. "I'm one of those people who thinks less is better. There are so many people who have so much done to their face. They never look better!"

She did say she does "minimal" Botox treatments, and has admitted to a few surgeries in the past. She told Us Weekly back in 2013 that she'd had a nose job and liposuction, saying, My nose bothered me for a long time. The surgery made me feel better."

And despite being "terrified of blood and needles," she added regarding liposuction: "After having four kids, no matter what exercise I did, the love handles wouldn't go away! I'm very happy with the results!"

To People, Richards joked, "It's fun to watch yourself age in high-def. I see the changes. It's part of life. We're in a town where we don't want to age, and we're almost expected not to, but what can I do?"

Richards believes balance is key, adding that she embraces getting older as a testament to her late mother, who died at the age of 62 from breast cancer.

I'm not one of those women who is like, "Every wrinkle has made me who I am," but I'm also not the person who doesn't want to age. My mom died young, so for me, every birthday is a reason to celebrate.

She's so right, and it's refreshing to see someone embracing each new year as a gift. One caveat, though, is that Richards won't be seen in a two piece swimsuit anytime soon. "Lisa Vanderpump and I always joke, 'Hell no you won't see us in a bikini!' We're not 25!" Maybe not, but they're both still pretty flawless in my eyes, no matter how many candles are on their birthday cake!

More like this
What Is Barack Obama’s Net Worth? He Makes *Way* More Now As An Ex-President
By Hugh McIntyre
Twitter Is Upset About The 'American Idol' Top 3 Results: "Who TF Is Voting?"
By Jake Viswanath
Everything We Know About Chèrie & Jessey’s Abrupt Exit From Bling Empire
By Alyssa Lapid
Selena Gomez’s ‘SNL’ Hosting Debut Had Twitter Gushing Over ‘Barney’ & Wigs
By Stephanie Topacio Long
Get Even More From Bustle — Sign Up For The Newsletter