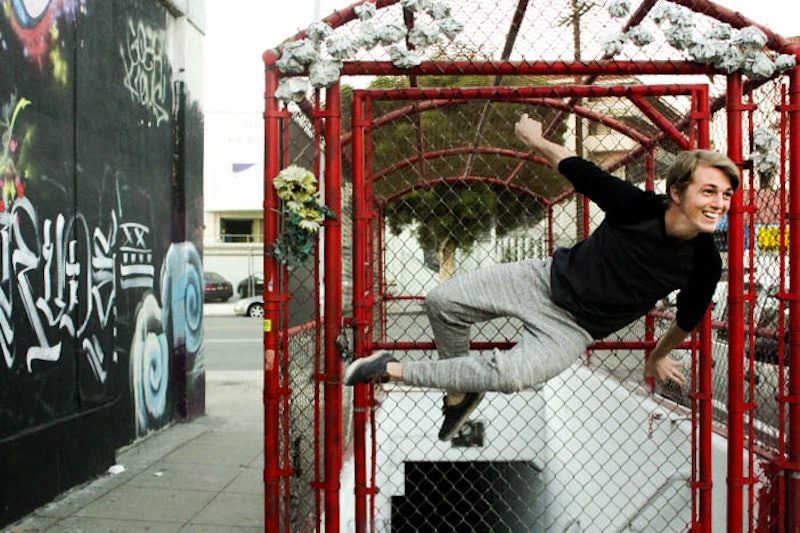 Having a younger brother is a special thing, and I'm lucky enough to have two. But finding gifts for younger brothers? Sometimes it feels impossible. See, younger brothers are a strange species. As kids, mine spent most of their time shrieking through the woods, dueling with wooden swords, or lurking on top of our roof like ninjas, trying to give the neighbors a heart attack. They were a wild duo, but by the time they hit their late high school years, something magical happened: they became cool. One day, they were covered in dirt from head to toe; the next, they were wearing patterned Vans and starring in plays and running cross-country and getting girlfriends and generally running the world.

If you've got a younger brother who's waltzing into adulthood with more panache than you ever expected, give him something this holiday season that acknowledges that. You want a gift that says, "Dude, you'll never be quite as cool as me, but you're doing a pretty good job of keeping up. Now stop kicking the back of my seat." In the spirit of sibling-hood, I rounded up a few things that I know my little bros would love, and I found the perfect model to show them off (hint: we're related).

Younger brothers are usually too busy watching the new Star Wars movie to care about interior design, so it's up to the older sisters of the world to provide them with unique objets d'art for their bachelor pad. (It's also up to older sisters to teach their younger brothers what objets d'art means, and to warn them that if they use that phrase among the wrong crowd, they will get beaten up.) If your brother just got his first apartment, gently urge him to toss out his Carmen Electra poster and replace it with something hip and design-oriented, like this bamboo clock featuring the work of independent artist Yago Partal.

He may be old enough to toss back whiskey shots in Prague, but he's not trying to lug a leather briefcase to his finance job downtown anytime soon. A colorful messenger bag is more mature than a traditional backpack but still youthful enough to bear witness to all his wild adventures. If you're feeling extra generous, stock it with energy bars, boxed Blue Bottle coffee, and a fire-starting kit — and tell him to run off into the wilderness.

In the olden days, young men were sent on a Grand Tour of Europe to become cultured, educated members of society. Today, they're more likely to get their kicks wandering around the nearest downtown. In order to enable this cultural experience, make sure your brother has shoes that are durable and light enough to get him through several hours of walking (these shoes are water-resistant and weigh 175 grams each), but still cool enough to earn him points from everyone he meets.

4. A foodie subscription service in miniature

His favorite food will always be the Taco Bell Quesarito, but that doesn't mean he shouldn't experience the joys of cashew cardamom butter at least once in his lifetime! Get him a monthly tasting box subscription service that includes a selection of gourmet spreads, jams, honeys, hot sauces, and cocktail mixers, and then demand culinary results at the next family gathering. His future wife will thank you.

Everybody should take a solo road trip at least once in their life. Buy him something to keep the sun out of his eyes, hand him a tattered map (or a car phone charger; let's be realistic here), fill up his tank, and tell him to set off for the nearest ghost town.

6. Loungewear that doesn't have a school logo on it

The days of gym shorts emblazoned with his middle school logo are far behind him, and he deserves something a little nicer to lounge around in (this picture = my brother lounging). The line FL2 was designed by Kate Hudson for her brother, so aww.

7. An entirely revamped set of basics

For the sartorially-challenged brother, you may want to start simple. He's not ready for neon track pants and silk neckties — he really just needs a t-shirt that doesn't say "I'm With Stupid." Basic/Outfitters has a Create-A-Drawer service that allows you to pick out things like socks, t-shirts, and joggers. It's like giving him the gift of a clean slate.

8. A really nice skincare product that he will definitely not appreciate for another 10 years

Lawless + Pines The One Serum, $98, Lawlessandpines

Your little brother has definitely never heard the word "serum" in his life, but IT'S NEVER TOO EARLY TO HOP ON THE ANTI-AGING BANDWAGON, RIGHT LADIES?! Just kidding — no need to burden him with the terrible toilette worries that we've inherited as women. But he might want to consider starting a moisturizing routine, due to his tendency to run around in the blazing desert sun all day. Tell him this serum contains eight cutting-edge peptides that combine to hydrate, sooth, improve skin tone, reduce the appearance of — actually, never mind. Just tell him to apply it every night after he washes his face.

I'm telling you now, monthly subscription services are the gifts of the future. A monthly Sprezzabox contains five to six items — ties, colorful socks, pocket squares, grooming products, and so on — handpicked by a stylist and designed to keep your brother looking like he runs the hippest startup in Silicon Valley. (For context, my brother's box held a Sprezza Necktie and Sprezza socks, a Woodchuck USA Stache Tie Bar, a Bedford & Broome Pocket Square, and a tiny box of Dapper whiskey stones.) It's like a monthly reminder to be a grownup paired with the monthly thrill of being a kid on Christmas morning.

10. The coolest bike ever

A particularly awesome little brother deserves a bike that will impress EVERYONE in his college English class/acting workshop/hostel in Budapest/neighborhood paper route/summer internship. This white bike, inspired by holidays in California, is achingly cool, and even comes with a pair of matching socks.

OK, OK, so your brother isn't quite ready for an artisanal unicorn-hair shaving brush yet. But he deserves better than drugstore products, because dammit, he produced that independent short film all by himself, and you are just SO PROUD, and also you KNOW he's using bar soap to wash his hair. Get him a selection of cult favorite Bulldog products — they're affordable and big in Britain — at your local Whole Foods. I recommend a simple quartet of face wash, moisturizer, shave gel, and aftershave balm.

12. Nice clothes, even though he ALWAYS says he doesn't want clothes

Sometimes you have to ignore the desperate pleas of those you love when they beg you not to get them ANY MORE NICE SWEATERS, because they just want to wear baggy sweatshirts and play video games forever. Sometimes you have to say, "Listen, dude, I am getting you a really nice scarf and you will WEAR IT AND LIKE IT!" Lest you think I'm a terrible big sister, I'll tell you this: once I got my youngest brother a pair of paisley Vans for Christmas. He was skeptical and didn't think they were his style — but the last time I saw him, he was pairing them with a pair of purple skinny jeans.

13. Exclusive concert tickets and/or affordable audio mastering, because he's always wanted to be a rock star

Your brother may want to forget all about his junior high quasi-punk rocker days when he was in a band called the Screaming Lemmings, but he still dreams of shredding guitar solos in front of a sold-out stadium. To make his musical dreams come true, sign him up for Jukely (a monthly subscription service that lets him attend a concert every night of the week, if he wants), or get him LANDR (an easy but highly professional-sounding mastering service that lets him record demos and send them out to — well, anyone, if he so desires). Need something for his stocking? Snag him a stylish iPhone case, so he can listen to music while looking like he totally went to Coachella last year.

14. A grown-up watch and a dinner reservation with Dad

For the brother who has everything, this gift screams, "You may be a successful Wall Street banker, but I will always make more money than you, at least in my imagination. Also, you need to work on your chronic lateness. Dinner's at seven."

15. Good whiskey and the classiest blazer ever

A classy younger brother deserves a classy gift. If your brother fancies himself something of a dapper cad — and if he's at least 21, duh — this slim-fit, satin-trimmed tuxedo jacket will get him into any party. Throw in a beautiful bottle of small-batch whiskey, and you're officially related to a grownup.