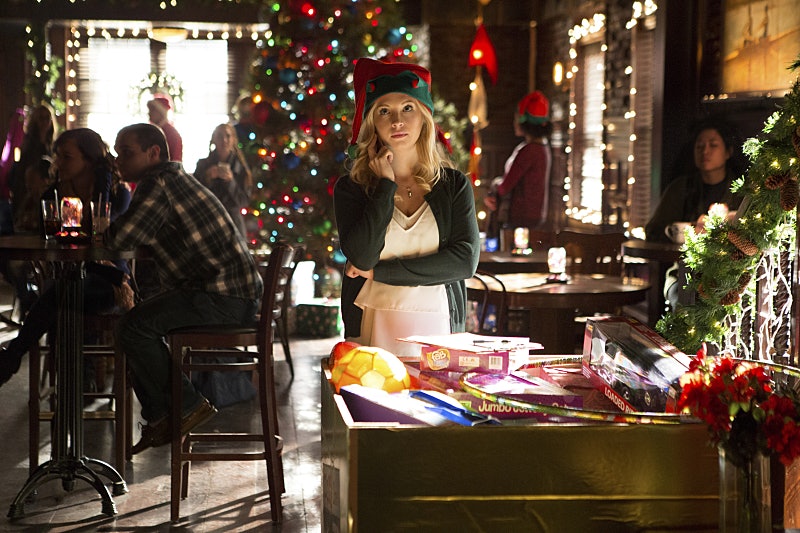 While I admit to loving the Christmas season just as much as the next guy/girl, there's no denying that the holiday season tends to leave a big TV-sized hole in my heart, at least when it comes to my regularly scheduled shows. By now I'm sure most of you realize that a majority of your favorite TV shows go on hiatus for a while during this time of year, leaving us to suffer in silence from withdrawal. (Tis the season, after all!) But the only thing worse than knowing that a show hiatus is coming, is not knowing when said show will return, which is why I feel it's my sworn duty as a fellow TV addict to tell you when The Vampire Diaries Season 7 will be back in the new year.

Back in November, The CW announced that TVD would return on Jan. 29, 2016, which — if you check your iPhone calendars — you'll notice that date falls on a Friday, not a Thursday. That's because, in a very interesting twist, the network has decided to push the vamp-centric series from its usual Thursday night mantel into the Friday night death slot. (Fitting for a vampire show, but still, I'm slightly worried what this change-up could mean.)

But I think we can all agree that any TVD is better than not TVD at all, regardless of which day of the week it falls on. So to help quench our Salvatore thirst, I've come up with a few ways we can still get our vampire fill this holiday season. Such as...

Re-Watch Past Seasons Of TVD

Is there a favorite storyline or plot development that you're dying to see again? Netflix has the first six seasons of the show ready and waiting to fulfill all your streaming needs. It'll remind you why you feel in love with this series in the first place.

Any TVD fan worth their salt is undoubtedly already watching this Mikaelson spin-off. But just in case you're one of the selection few who has yet to tune in, now would be the perfect time to make your way through this nail-biting (pun intended!) supernatural drama.

While we usually prefer for vampires to stay alive on TVD, Buffy's antics as a badass slayer is more than worth a second, third, or even tenth look. This show literally raised the stakes in regards to female empowerment and deserves a proper tribute for its efforts. What better way to do that than by throwing a Buffy the Vampire Slayer-themed party. Holiday parties are so last year.

Tune In For The Nightmare Before Christmas

This one might be a bit of a stretch considering vampires aren't prominently showcased, but there are a few vampires seen every now and then throughout the film, so it still totally counts! And, as an added bonus, it's a Christmas movie, so it's still in keeping with the holiday spirit.

If you haven't done so already, I highly suggest tackling L. J. Smith's collection of The Vampire Diaries books. Not only will it fulfill your thirst for Mystic Falls antics, but it will also allow you to see how the show differs from the original book series. Plus, who doesn't love to curl up with a good book next to the Christmas tree?

Just because you won't see their characters until late January doesn't mean that you have to go without seeing the actors that portray them. Ian Somerhalder, Candice King, Paul Wesley, and Kat Graham are all very present on social media and make a point of posting tweets and photos of their life on an almost daily basis. It may not be TVD, but it sure is the next best thing.