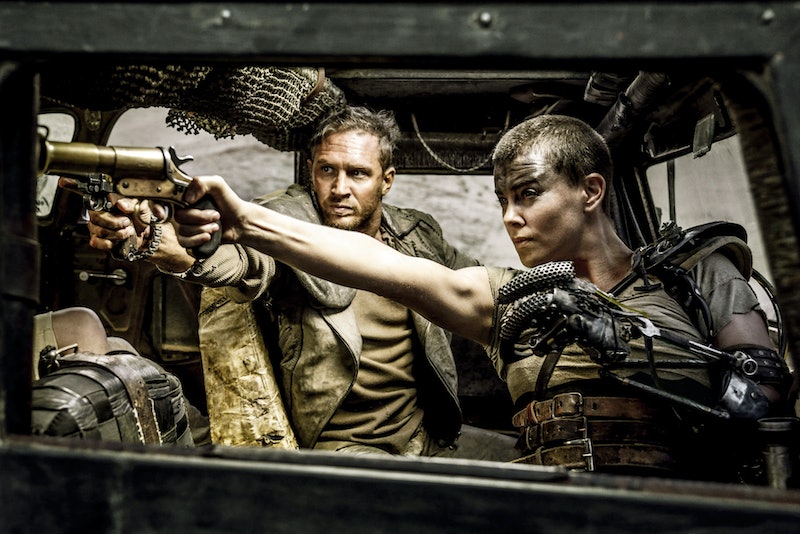 On Wednesday, we finally found out the nominations for the 2016 SAG Awards. And, though there's some names that I'm ecstatic to see shortlisted (namely, Viola Davis and Uzo Abuda, who have been singled out for their outstanding TV work while Cate Blanchett and Rooney Mara have been rightfully shortlisted for their powerful performances in the adaptation of the Patricia Highsmith novel, Carol), I can't help but feel just a bit peeved at the lack of accolades for Mad Max: Fury Road.

Though the movie has been nominated in the Stunt Ensemble category, Mad Max has missed out on being included in any other major category.

Now, this isn't just me having a sour fangirl moment, because the film has been awarded the accolade of being The National Board of Review's Best Film Of The Year as well as Empire Magazine also naming it theirs, so I'm definitely not alone in my grand love for it. What's definitely upsetting is the clear possibility that Mad Max: Fury Road might be snubbed for major awards throughout the entire awards season, and that's just not right.

While the stunts in the film are undeniably breathtaking, they aren't the main driving force (no pun intended) for the story in the same way that they are in any other action film Remove the stunts those films and you'll be left with little... but remove them from Mad Max, and you'll still be left with a powerful plot line, some stunning and unique characters and some truly spectacular performances.

As fascinating warrior veteran Furiosa, star Charlize Theron is a formidable force, and though her character could have easily been portrayed with a lazy, one-dimensional attempt at showing a strong woman overcoming trauma and oppression, Theron full-on fleshes out her character with nuance. Though she's strong, powerful and engaged with the damages of her past, Theron plays the character with a masked vulnerability so subtle that you can only really witness it through the physicality of her character; caged yet determined and using aggression as a shield to move forward through an emotionally draining battlefield which she doesn't have the luxury of pausing at any time to take measure of.

Furiosa, and Theron as her, is as complex a representation of a female warrior that you could ever hope to see. So why wouldn't the SAG awards, and all future awards of the upcoming season, want to celebrate that? It isn't just Theron who deserves the recognition, but the entire film as a whole, too: In terms of being a mainstream movie and an action film, Mad Max: Fury Road deserves to be celebrated for being one of the first of it's kind to concentrate it's attentions on a dominating female narrative which isn't done just for the sake of it, but is instead used as a platform to make some real statements on the position that women repeatedly get forced into within the World.

We have the wives, a pack of women who have essentially been trafficked into becoming concubines for breeding purposes, being liberated from their horrific circumstances and willing to risk death in order to escape them, and we also have the matriarchal biker bang who join the film during it's third act, proving that there's no age limit to being a badass. The film is stacked with inspiring female characters and unique ones at that. They aren't there to be tokenized or objectified — these are women who belong there, and they deserve to be given the agency to fight their own battles.

These are women that our culture time and again fails to pay attention to. Though we're aware of human trafficking and are reminded of it in the news on occasion, we very rarely give it the attention it sorely requires in order for real changes to be made, and so too with victims of sexual abuse. Even older women in our culture are forced to bear the brunt of being made to feel ignored and unimportant, so for all of these women to be acknowledged in such a powerful manner was truly a paramount moment for mainstream Western cinema.

By showing such interesting female characters, creator George Miller gets to make some truly cutting commentaries on ageism and sexism, not just in Hollywood but in the World as a whole. Though Max might have been fighting for his survival in the prior movies, it's clear in Fury Road that these women aren't just fighting for their survival, but for the rights to their own bodies, their entitlement to their own space and for ultimately, their independence.

By acknowledging only the stunt aspect of the movie is to disregard the great leaps that the movie has made in portraying a complex set of women within a genre where they're generally overlooked and even, disparaged. The SAG Awards — and The Golden Globes, and Oscars, to come — would do right to recognize the movie for it's empowering overall message, spectacular central performance from Theron and capacity for making what could have been a throwaway, popcorn blockbuster into one of the most vital, exciting and interesting movies of 2015.

If for nothing else, the mere recognition of awarding it some nominations in major categories would extend a vital message to mainstream film makers: If you want to be taken seriously, then make something with real heart and a conscience and above all else, respect your female characters because they might just surprise you.