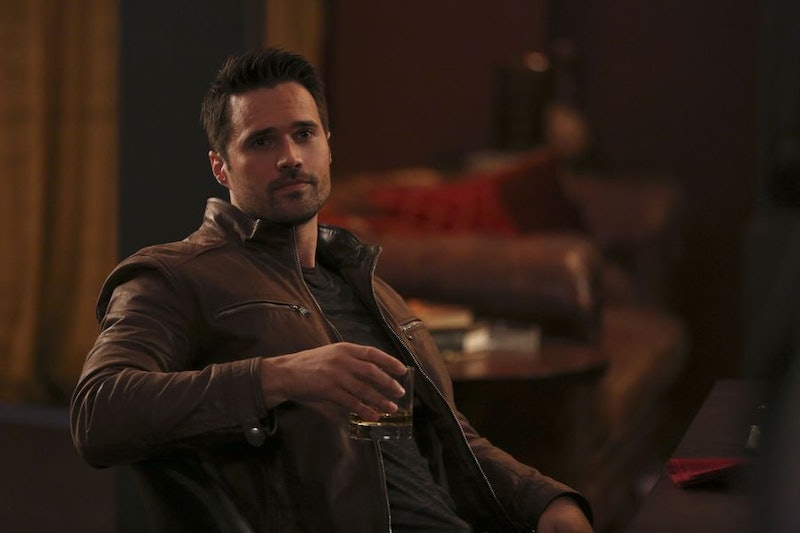 Well, we were promised an insane Agents of S.H.I.E.L.D. midseason finale, and it did not disappoint. Viewers saw Daisy head up her very own band of Secret Warriors to infiltrate the castle with the portal that HYDRA had taken over (with Inhuman members of the ATCU), Jemma let Andrew loose on the Inhumans left in stasis, resulting in many gruesome deaths, and oh yeah, Coulson killed Ward on Agents of S.H.I.E.L.D., after he and Fitz went with the Hydra leader to an alien planet. It was a jam-packed hour, but resolved many different plotlines that have been building for years.

Of course, the biggest resolution of them all was Coulson battling with Grant Ward. Once friends and now enemies, they have been playing a game of cat and mouse. But when Ward killed Rosalind his fate was sealed, and after tracking him down and shooting him on the alien planet, Coulson killed Ward in an extremely shocking manner. Coulson used his bionic hand to literally crush Ward's windpipe, and while the heartbreak metaphor was clear, it turned out that Ward was right, and death wasn't the end for him. Death itself later inhabited his body and traveled back to Earth. What does this mean now that we have basically a zombie-Ward walking around? We will have to wait and see, but here is what this twist could possibly bring for the rest of Agents of S.H.I.E.L.D. Season 3.

We got a taste for what a Death-takeover looks like when we saw Death inhabiting Will's body. He clearly had access to all of Will's memories, which means he will be able to see into Ward's past as well. This should make his encounters with S.H.I.E.L.D. that much more painful, and make it take longer for them to realize what has happened.

The Return Of The Hand

Rookie move Coulson, leaving your hand on an alien planet next to your dead enemy. You had to know that was going to come back to bite you. Oh yes, Death has Coulson's hand and that will have to make a glorious return.

Gideon Malick was no slouch, and Death has been evil for literally ages. Plus, he now has all of Ward's S.H.I.E.L.D. memories. Combine all that and you have a serious problem. Something tells me S.H.I.E.L.D. will need more Inhumans on their side, STAT.

Everyone likely heaved a huge sigh of relief when Ward's body was left behind. I can only imagine their shock when he comes back into the fray, more evil than ever.

I know this is a long shot, but it could happen. Death has Ward's body and memories, so it's possible a little piece of his soul is still in there. Maybe, just maybe, that soul comes out to protect the team at the very end. It could happen.

I won't lie, when Coulson and Fitz locked eyes back at base, I found myself wondering if Coulson was the one possessed by Death for a moment. Killing someone for revenge was a line that he had never crossed before, and even without being possessed, I think we will be dealing with a much darker Director when S.H.I.E.L.D. returns.

A Whole Other Side Of Brett Dalton

We've seen him play good, bad, lovelorn, and everything in between. Now that Ward has been taken over by Death Dalton, has to completely change character again, and I for one cannot wait to see him do it when Agents of S.H.I.E.L.D. returns.