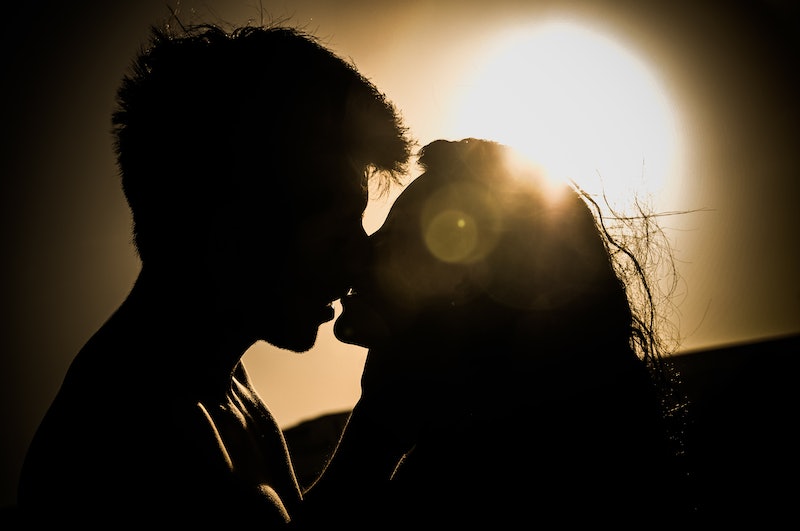 Even if you think you know a lot of facts about human sexuality, odds are, there's still a lot that you don't know. For instance, were you aware that semen contains vitamins and minerals — a huge range of them, from zinc and potassium to vitamin B12? Or that orgasms are like sneezes, in that they're one of the few bodily processes that are completely involuntary and can't be stopped once they're started? (Seriously, try stopping an orgasm mid-way through. Impossible.) We're still learning how our bodies work and the real ways in which sexuality functions, and every year brings new discoveries, some weirder than others (as you'll soon see).

And the strange facts about human sexuality don't end with fluids and functions — some of the wildest facts about human sexuality have to do with the sheer size of our junk. The clitoris, for example, appears tiny — but that tiny visible bit is just part of the huge unseen area of clitoral tissue around the vulva and pelvis, which contains thousands of nerve endings. And that fact's just the tip of the iceberg (or tip of the clitoris, if you prefer)

So read on to get your fix of unusual sex facts about deadly erections, STD prevention laws, erotically stimulating pumpkin pies, and bicycles that mess with your testicles. If nothing else, you'll be a riot the next time you take somebody to bed.

1. A Permanent Erection Can Be Deadly

The term "priapism" — a condition named after the Roman fertility god Priapus (who was blessed with a comically outsize penis) — means an unwanted, painful, and prolonged erection. There are two different kinds of priapism: one is caused by too much blood flow to the penis, the other caused by a blockage that prevents blood from draining. Priapism is serious business; it can cause damage to the tissue of the penis, and can have a variety of causes — it can be a symptom of renal cell carcinoma, sickle cell disease, or even excessive cocaine use. And the world's deadliest spider, the Brazilian wandering spider, is known to cause priapism with its bite.

Priapism may sound silly, but can actually be life-threatening. A 44-year-old man had to have his penis amputated completely in 2014 after his priapism threatened to kill him. It's classified as a serious medical emergency.

2. The World Record For Vaginal Weight Lifting Is 31 Pounds

There isn't a Guiness World Record for vaginal weight-lifting, unfortunately; but Tatyana Kozhevnikova, who is believed to have the world's strongest vagina, would likely be an undefeated title-holder. Kozhevnikov lifts weights by contracting her vagina around an egg-shaped object, and then using that to lift up to 30 pounds attached by a chain. Kozhevnikov pumps vaginal iron by using the muscles of her the pelvic floor, but you don't have to be an aspiring record-setter to make use of them in your own life; tensing them is often recommended by sex therapists (they're called Kegel exercises).

3. Victorian England Passed A Law To Protect Prostitutes From STDs

The Victorian era in England is regarded as one of the prissiest in history, but don't believe the hype —Victorians weren't complete prudes. In fact, in 1866, they passed the Contagious Diseases Act — one of the first laws protecting the health of prostitutes and their military clients. It meant that prostitutes who worked predominantly in British army camps around the country had to go in for periodic medical check-ups. If a prostitute was found to have an STD, she'd be treated at the government's expense and then allowed to return to work. It's one of the less-known chapters in the history of human sexuality, but it was a pretty ground-breaking move in a century we associate with being uptight about sexuality.

The whole bike-to-work phenomenon is wonderful for the environment — but it may not be excellent for penile health. A 2005 study examined by the New York Times found that modern bicycle seats place considerable pressure on the testicles and penis of male riders, causing all manner of genital havoc — from small tumors in the scrotum to a loss of libido and blood flow. Apparently, the excessive pressure that long rides place on the perineum may cause extensive damage that makes it harder to achieve an erection — something to consider if you're a habitual triathlete who also likes to get frisky.

5. The Smell Of Pumpkins Can Encourage Erections

A remarkable 2014 study found that certain scents can increase penile blood flow and help men get erections. And, weirdly, they weren't the kind of scents you'd associate with sexiness, like musk, vaginal secretions, female sweat or bed sheets; rather, they're down-home, comforting smells. The two that caused the biggest rise in penile blood flow, at 40 percent each, were pumpkin pie and lavender.

The runners-up weren't particularly sexual, either: they were the scents of black licorice and doughnuts. Scientists don't know exactly why these scents create sexual excitement, but they think it has something to do with the fact that the scents evoke psychological associations of comfort, safety and intimacy — which helps the penis feels unthreatened. No, I can't believe I just wrote that sentence either.

A 2015 University of Toronto research study found that, contrary to popular belief, more sex doesn't necessarily mean more happiness — in fact, the correlation between happiness and our sex lives might actually have a leveling-off point. Apparently, the happiness boost we get from sex peaks when we're having it just once a week; but having sex more often than that doesn't significantly increase our happiness.

It seems that for American couples, five times a month is deemed "enough" to meet their needs and keep them satisfied. It seems that there's no real link between quantity and happiness when it comes to sexy times: so if you're doing it well once a week, you're set. And if you're doing it once a week and still not that happy, sex probably isn't the problem. Maybe you need a hobby. May I suggest taking up vaginal weight lifting?