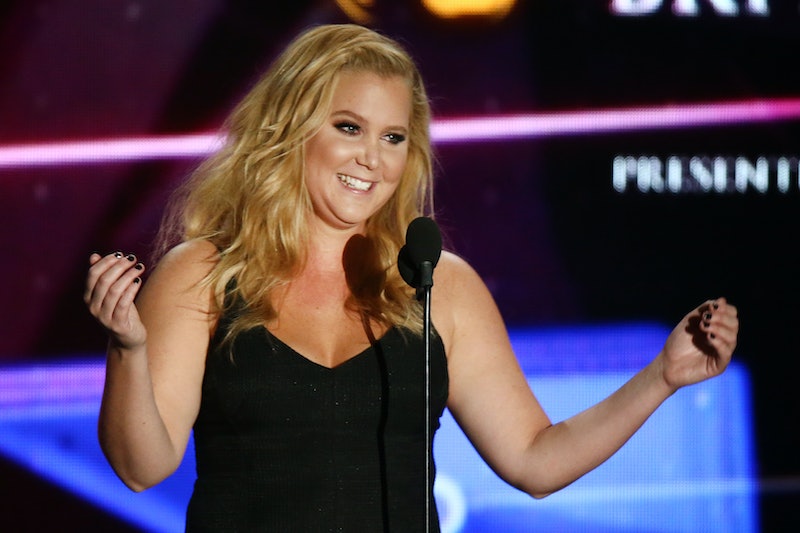 It's a fantastic day to be Amy Schumer. (Well, these days, there are probably a lot of fantastic days to be Amy Schumer.) On Thursday, Dec. 10, the 2016 Golden Globe nominations were announced, and Amy Schumer was nominated for the Golden Globe for Best Actress in a Motion Picture, Musical or Comedy for her lead role in Trainwreck. On top of that, the movie, which Schumer also wrote, was nominated for Best Motion Picture, Musical or Comedy. See I told ya it was a good day to be her!

Naturally, many celebrities took to social media to celebrate their nominations, and the 34-year-old comedian followed suit. If you're a fan of Schumer's you may already know that she loves a good #TBT pic, and hers are always adorable. I mean, just check out this video of her wishing everyone a happy Hanukkah through song as a kid. So cute!

Amy, please keep the throwback pics coming. Can't wait to see if you win big come exactly one month away on Jan. 10.

More like this
Amy Schumer Is Actually The Other Kardashian Sister You Never Knew About
By Jake Viswanath
Laura Dern Said “Cultural Awareness” Made Her Rethink This 'Jurassic Park' Fact
By Grace Wehniainen
Colin Firth Revealed His Favourite Mr. Darcy (& No, It's Not Himself)
By Sophie McEvoy
Watch The Dramatic First Trailer For Netflix's Jennifer Lopez Documentary
By Alyssa Lapid
Get Even More From Bustle — Sign Up For The Newsletter