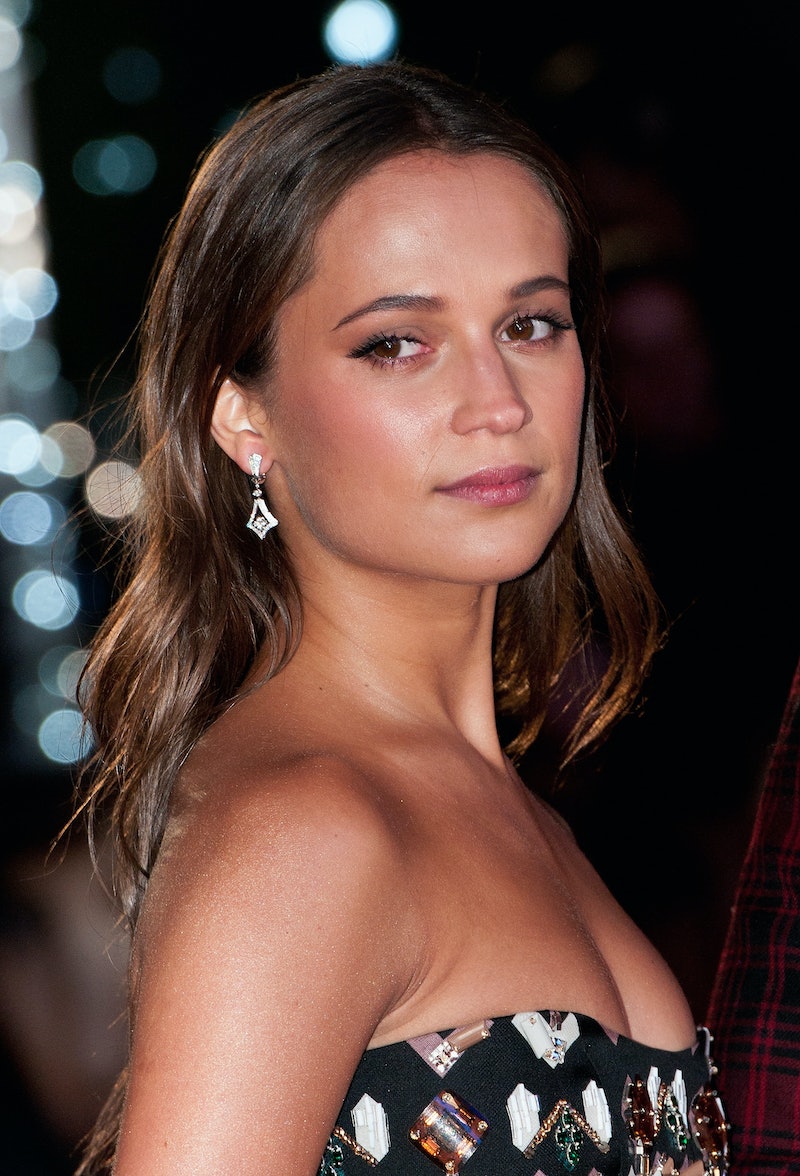 If you've haven't heard of the actress Alicia Vikander before, odds are you will know who she is pretty soon. Or maybe you just didn't realize that she was, in fact, one of the names behind some of 2015's top movies of the year! With hits including Ex Machina, The Danish Girl, and The Man from U.N.C.L.E., this Swedish native just broke into lead Hollywood roles at full force. And now she has (not surprisingly) been nominated for not one, but two Golden Globe Awards. With nods for both Best Performance By An Actress in a Supporting Role for Ex Machina and Best Performance By An Actress in a Motion Picture — Drama for The Danish Girl, she is seriously the new girl to watch.

Alicia first broke onto the American scene in the 2012 Oscar-winning film Anna Karenina and in 2013's buzzed about The Fifth Estate. However, with these two nominations being the first times she's being critically recognized for holding lead roles, I have a feeling she's going to be carrying tons more motion pictures on her shoulders in the years to come. In The Danish Girl, Alicia took on the strong-willed, yet heartbroken character of Gerda Wegener — the wife of transgender woman Lili Elbe (played by Eddie Redmayne). And, in Ex Machina, Alicia's Golden Globe nod comes in regards to her role as Ava — an advanced piece of technology built by the mysterious Nathan (played by Oscar Isaac). Vikander is undoubtedly nailing roles that are challenging just from the way they are viewed on the surface, let alone the depth she brings to each one.

However, despite the status of her fellow actors, and the difficulty of the roles she has taken on, Vikander seemed to have stolen the spotlight in both of her Golden Globe nominated films. As The New Yorker claimed, "Ex Machina lives and dies by Alicia Vikander. The film clicks on when she first appears, and it dims every time she goes away." And Variety credited her as "The Real Winner From The Danish Girl" by stating, "Toggling sensuality and sensitivity, with a latent streak of anger throughout, Vikander plays her [Gerda] half beautifully."

But, aside from her work in the films that she's been nominated for, Vikander's success reach far beyond anything we discussed yet. She also appeared in the 2015 film Burnt (starring Bradley Cooper), and she is set to have four more films released in 2016, including: Tulip Fever, The Light Between Oceans, the upcoming Bourne sequel, and Submergance. These are roles that will have her tackling more drama, romance, and even some action, and roles that are sure to put her more in the public eye. After all, she works not only in the well-known Matt Damon franchise, but also alongside the likes of James McAvoy, Christoph Waltz, and fellow 2016 Golden Globe nominee, Michael Fassbender. These films are ones that are sure to gain the eyes of the public, and therefore, giving Vikander the hearts of the viewers as well.

And it would truly be a dream come true, as she expressed to IndieWire in June 2015:

"I've done films with people I grew up admiring, seeing on the screen as a kid in Sweden. I never thought I was going to get abroad work. I thought maybe I was going to work in a theater in Stockholm. That was probably my biggest dream within the sphere that I had. So that is quite overwhelming."

Aside from all of the upcoming press and award season red carpets we can expect to see her on, I honestly just can not wait to see what she's do next. Bring on 2016: The year of Alicia Vikander.