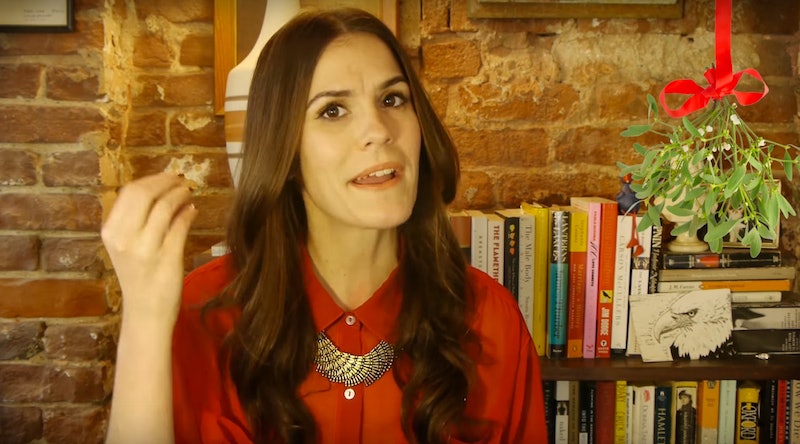 Mistletoe: Romantic excuse to kiss someone you’ve always wanted to smooch on, or super awkward tradition leading to embarrassment and eternal regret? Only you can answer that question, but Cristen Conger can answer a simpler one: Why do people kiss under mistletoe at all? In a video for Stuff Your Mom Never Told You, Conger explains the ancient origins of this strange tradition, and reaches a conclusion I’ve long suspected: It’s all Loki’s fault.

OK, fine, it’s not entirely his fault, but he is involved, which is why I’m looking forward to Thor 4: Making Out Under Foliage.

Mythology surrounding mistletoe dates back to the ancient Greeks, who believed the plant had healing properties that could aid epilepsy, infertility, and menstrual pain. (That does not mean you should run out and get some to help your cramps — some varieties of mistletoe are toxic). According to The Guardian, the Greeks also associated the plant with fertility because its leaves stay green throughout the year, and some cultures regarded it as an aphrodisiac because of the, er, “suggestive arrangement of its berries.” These beliefs may have eventually led to the association between mistletoe and kissing.

But the another possible root of the mistletoe tradition is to be found in Norse mythology. Conger explains that it all started with a god named “Balder,” aka this dude:

The story goes that a prophecy foretold Balder's death, and his mom, a goddess named “Frigg,” tried to prevent it by going to all the plants and animals and forbidding them from harming her son.

This is where everyone’s favorite god of mischief comes in: Loki found a loophole, realizing that Frigg had forgotten to forbid mistletoe. He made an arrow out of the plant, shot Balder with it, and killed him.

A grief-stricken Frigg declared that mistletoe would never harm anyone again and proclaimed that “anyone who passes underneath the mistletoe shall receive a kiss.” Some believe that the early Christians then incorporated this myth into their own traditions.

Although it looks adorable wrapped with a ribbon and hung from the ceiling (at least until someone vile tries to kiss you underneath it), mistletoe isn’t as friendly as you might think. The plant is actually a parasite that gloms onto trees and steals their water, sunlight, and nutrients. So if you’re having mistletoe in your house this year, don’t just toss it outside when the holidays are over — make sure it ends up in the trash.