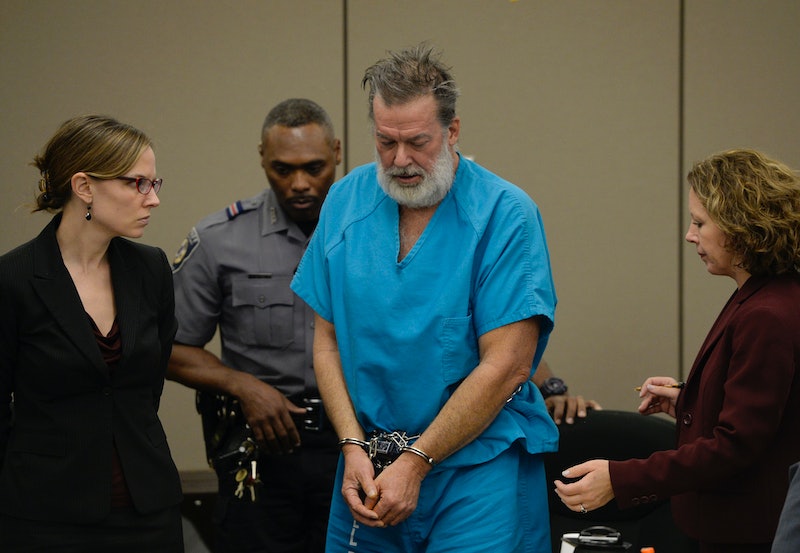 Robert Lewis Dear, the man accused of killing three people in a shooting at Planned Parenthood in Colorado Springs, Colorado, last month, had quite the outburst in his first court appearance Wednesday. Dear said, "I am a warrior for the babies," and at other times interrupted courtroom officials to say, "I am guilty. There is no trial" and "Protect the babies," according to CNN. Prior to these outbursts, investigators said they were still trying to figure out what Dear's motive was and that it was too soon to say he was motivated by extremist, anti-abortion hate. But this outburst should clear up all of that ambiguity. It's clear now that Dear is an extremist and a "radicalized" terrorist, and it's about damn time that people start calling him one.

For some reason, the only time Americans are willing to label someone a "radical" or an "extremist" is when that person is a Muslim. President Barack Obama announced last week that the San Bernardino shooting was being investigated as an act of terror, and The New York Times released a report Monday saying the shooters had been "long radicalized" before they walked into the Inland Regional Center and killed 14 people.

So, what is radicalization if it fits the San Bernardino shooters and the Paris attackers? Dictionary.com defines "radical" as "thoroughgoing or extreme, especially as regards change from accepted or traditional forms," or "favoring drastic political, economic, or social reforms." So, someone who is radicalized often adopts these drastic views and seeks to use them as a means for political or social reform.

But why do we only apply the idea to Muslims? Yes, using a perverted definition of religion as justification for killing is radical. But using an idea to kill anyone with hopes to change the world is radical, even if religion — or Islam, specifically — isn't what's being perverted. Charleston shooter Dylann Roof wore the Confederate flag and Apartheid-era South African flags. He said he wanted to start a race war and his roommate said he supported segregation, according to Newsweek. Killing black people and believing they are subordinate to white people is radicalization reminiscent of the Civil War. (Though I would argue that there is no non-radical, anti-equality view behind that radicalization.)

And the same thing goes for Dear. Among his other outbursts in court Wednesday, Dear also said, "You'll never know what I saw in that clinic. The atrocities. That's what they want to seal. The babies." And that's just bullshit. No one gives birth to developed babies in Planned Parenthood clinics. Even if Dear was referring to late-term abortions, where a fetus might be more developed, there's no way he saw one because they are so rare and because, well, common sense says he probably wouldn't have been allowed in the room.

Because Dear's ideas were not reinforced by reality, and radical ideas seem to come from something, they were supported by something else. In June, the Center for Medical Progress released deceptively edited videos that purported to show that Planned Parenthood was profiting illegally off the sale of fetal tissue, or, for anti-abortionists, "baby parts." The videos have been widely discredited, as have the allegations against Planned Parenthood, but that hasn't stopped powerful, anti-abortion politicians and presidential candidates from fueling the fire successfully. New numbers from the National Abortion Federation found that "harassment, threats, and attacks against abortion providers, their staff, and facilities have surged dramatically across the country," according to Mother Jones.

Most abortion opponents would say they don't support people who harass and threaten the staff of women's health clinics, so — using the same logic we use with Muslims — someone who does that and uses anti-abortion views as justification should be called a radical or an extremist. And when their views target a population of people (i.e. women who want abortions) and seek to instill fear and terror in them, then they should be called a terrorist.

But, for whatever reason, anti-abortion or right-wing politicians won't denounce Dear as an extremist or a terrorist. Instead, politicians and Americans are reinforcing the idea that Muslims are the only people who can be radicalized. Americans — champions of democracy and bacon! — don't fall victim to the same extremism as those "barbarians" in the East. Oh, the horror!

That's the thinking that allows Americans to avoid labeling Dear as an extremist, but it simply doesn't make sense. If Muslims shouldn't be allowed into the country because a very small proportion of them radicalize, then the U.S. should start weeding out anti-abortion activists and Christians because more of them commit acts of terror than do Muslims in the U.S. Using FBI data from 1980 to 2005, Princeton University's Loon Watch found that non-Muslims carried out more than 90 percent of terrorist attacks in the U.S., according to the Centre for Research on Globalization. In October, Think Progress reported that right-wing radicals killed 48 people since 9/11, while self-proclaimed jihadists killed 26, according to stats from the New America Foundation.

With all of that information in mind, only using "radicalization" to refer to Muslims isn't just discriminatory — it's a lie. The idea that there's no such thing as a right-wing or Christian radical allows Americans to blame the mentally ill for crimes, further stigmatizing illnesses that millions of nonviolent people suffer from. But not calling Dear a terrorist also allows the U.S. to put itself on a pedestal: it seems as if Americans are saying, "We are not like those people over there in the East." That thinking perpetuates separation between religions rather than uniting countries against all radicals.