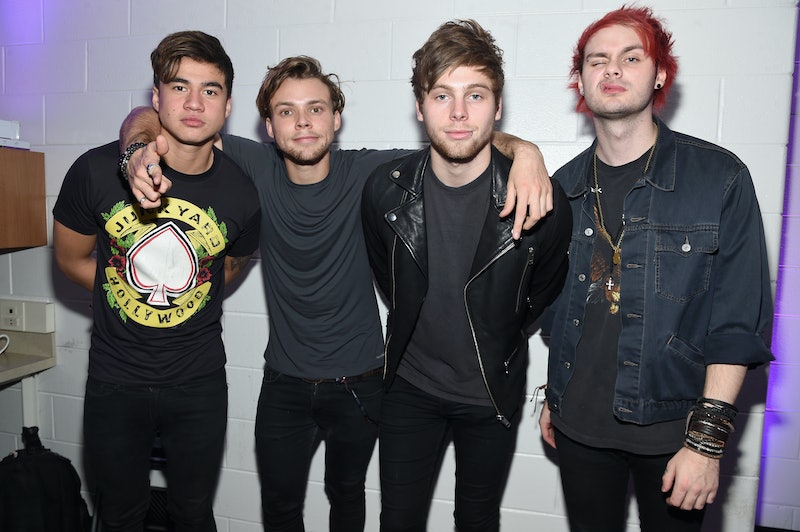 To hear the guys tell it, all credit for the name goes to the one and only Michael Clifford, who basically thought of it off the top of his head — no secret or special or even random meaning required (boo).

"The name came from... I remember, like, we were in science class when we were probably 15. And just writing a bunch of names on a piece of paper. We weren't paying any attention to anything the teacher was saying," Calum Hood revealed in a 60 Minutes special on the band, explaining that they decided on the name when they were just little fetuses at Norwest Christian College — before Ashton Irwin was even in the group. Guess he had no input; sorry Ash.

"We hated every one of them," Hood said of the names they came up with in class. "Michael went away. We all went away. And he texted us — he was like, 'How 'bout the name 5 Seconds of Summer? And we were like, 'Yeah, alright, that's fun.'" He added, "When you're in a band in school, you never really think it's going amount to much."

Oh, but it did. The band — nicknamed 5SOS (pronounced "five sauce") — blew the eff up after touring with One Direction, immediately turning everyone into fans with their insanely catchy lead single "She Looks So Perfect" and eventually scoring their first No. 1 on the U.S. charts with their recently released sophomore album Sounds Good Feels Good. In their rise to fame — the band is set to embark on a worldwide tour in 2016 — the guys have frequently been asked songs about their band name, including, "Why are you called 5 Seconds of Summer if there are only four of you?" And while the guys have never directly answered the question, Clifford certainly expressed his reaction to hearing the oft-asked query:

Fortunately for us all, James Corden may have shed some light on the band's name thanks to an actual LOL-worthy sketch he did in which he portrayed the lost fifth member of 5SOS. I mean, this skit is literal gold.

"I might not be in the band anymore, but I know what those five seconds of summer stand for," Corden says wistfully at the end of the video (he got kicked out of the band). "And I am the fifth second of summer." (Watch the whole thing below.)

One thing 5 Seconds of Summer was probably not influenced by? The Joseph Gordon-Levitt/Zooey Deschanel heartbreaker 500 Days of Summer. Though Sweety High makes the argument that 5SOS riffed their band name off of the movie, the site offers no evidence that this is the case — not to mention that the guys have never discussed this film being an influence on their name. Most likely, that tidbit of information is just an educated guess (and sure, I can see why they would think that; the titles sound similar) but not an actual fact.

At the end of the day, 5SOS can call themselves whatever they want just as long as they keep producing gems like "Broken Home" and "Jet Black Heart" and "Vapor" and continue to be their adorable, four-person-band selves. Plus, it's entirely fitting that their band name is something that Clifford just randomly thought of one day — it's like a metaphor for the group's entire aesthetic. And I mean that in the most loving way possible.