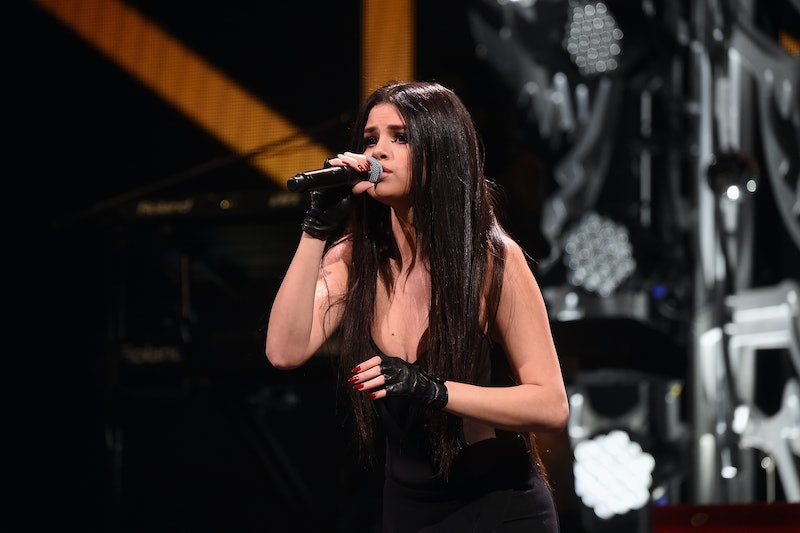 I hope you're sitting down, Selenators: Selena Gomez and Charlie Puth recorded a new song called "We Don't Talk Anymore," and it's coming out soon. Puth, the 24-year-old newcomer behind hits like "See You Again" with Wiz Khalifa and "Marvin Gaye" with Meghan Trainor, spilled the beans about the collaboration on Wednesday by posting a video with Gomez to his Instagram account. In the black-and-white clip, "We Don't Talk Anymore" plays in the background while the two singers goof around with each other. They look quite... comfortable together. How intriguing...

ICYMI: Gomez and Puth were rumored to be dating earlier this year, though they both denied it. "Before it begins, he is a good one. He is MY FRIEND only lol," Gomez tweeted on Sept. 21 along with a picture of herself and Puth. Later that same day, Puth echoed her statement, tweeting: "she's just my friend guys lol relax." However, regardless of their protestations, the news that the pair recorded a duet together is bound to spark speculation about the nature of their relationship once again.

So, what's the deal? Are Gomez and Puth dating? Maybe, maybe not. Contrary to popular belief, men and women really can just be friends, you know. Check out the "We Don't Talk Anymore" preview below.

Puth has had an incredible breakout year: "See You Again" topped the Billboard Hot 100 chart for 12 weeks, and "Marvin Gaye" was absolutely inescapable. His debut album, Nine Track Mind (which, confusingly, features 12 tracks), is due out on Jan. 29, 2016, and I bet he'd like to have another smash hit on the airwaves before it premieres in order to help generate interest. Gomez's music career is on fire at the moment, so joining forces with her could help make that happen.

Based on the preview above, "We Don't Talk Anymore" definitely sounds promising: it has an infectious beat and a catchy, sing-along hook. With any luck, we'll hear the track in full before the year is out.

Nine Track Mind is available for pre-order on iTunes now.

More like this
Selena Gomez Explained Why A Past Album Cover Made Her Feel “Really Ashamed”
By Grace Wehniainen
12 Photos Of Britney Spears' Wedding Guests, Husband, Outfits & Dances
By Grace Wehniainen
Taylor Swift's “Carolina” Theme For 'Where The Crawdads Sing' Soundtrack Is Here
By Jake Viswanath
What Is Elvis Presley’s Net Worth? How The King Earned & Spent His Fortune
By Grace Wehniainen
Get Even More From Bustle — Sign Up For The Newsletter