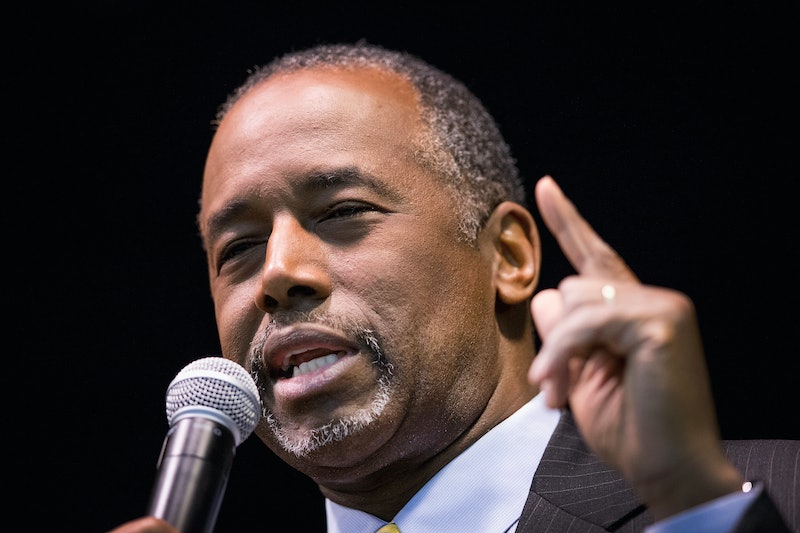 The last GOP debate of the year is an important one for many reasons. Between the fourth debate, which was held on Nov. 10 and now, a smattering of tragedies have dominated the news cycle. The Paris attack, the Planned Parenthood shooting, and what happened in San Bernardino have all called candidates' opinions on such important issues as foreign policy and gun control into question. These hot button topics will undoubtedly be discussed once more for a national audience on Dec. 16 — an event that is particularly important for famed former neurosurgeon presidential hopeful. The GOP debate could make or break Ben Carson and for one very important reason: His performance is the ultimate test of knowledge, especially when it comes to foreign policy.

Carson has been repeatedly criticized for his lack of foreign policy knowledge, even by his own campaign advisor, the former CIA agent Duane Clarridge. He attempted to amend that by taking a trip to Jordan and visiting the Zaatari refugee camp, which houses Syrians fleeing the neighboring war-torn nation. The move earned him acclaim among his followers but has since been overshadowed by a wholly different foreign policy blunder. Speaking at the Republican Jewish Coalition forum, Carson repeatedly mispronounced the name of the militant Palestinian organization Hamas as "hummus." Needless to say, the cringe-worthy offense proved only beneficial as comedic fodder. Carson responded by planning a trip to Israel and has since hired on George Birnbaum as a foreign policy advisor. Birnbaum previously worked for Israeli Prime Minister Benjamin Netanyahu as his chief of staff.

The fifth GOP debate, to be held at the Venetian in Las Vegas and once again hosted by CNN, is also a chance for the candidate to highlight his recently unveiled healthcare plan. Carson's brief proposal aims to repeal the Affordable Care Act, privatize Medicare, and allow states to control Medicaid rather than the federal government. The proposal is anything but in-depth. It's worth noting that four out of its 10 pages are simply images of Carson, some of which evoke his previous career as a neurosurgeon. Carson's life story is ultimately incredibly impressive but it appears he's wearing out his welcome with the American people, especially given his recent blunders.

Once riding high in second place, Carson's numbers have dipped considerably as of late. In a recent PPP poll of Republicans in North Carolina, Carson was tied for third with Marco Rubio, polling at just 14 percent. Donald Trump continues to lead the pack with 33 percent favorability. This final GOP debate of the year might very well be Carson's last chance to convince the American people that he has the skills and the knowledge to properly lead the country despite having no previous experience in politics.