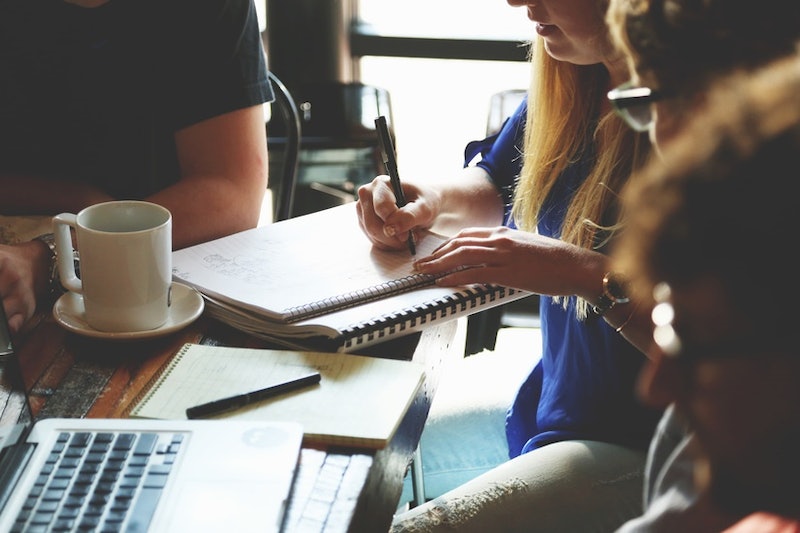 You certainly have opinions about your co-workers. But when was the last time you considered their opinion of you? It's true that haters are gonna hate, but it's also important to make sure your workplace behavior isn't flagging any signs you're a toxic co-worker. Some of the signs are easy to miss, but being a good co-worker to those around you goes beyond simply whether or not you like your job. Sure, if you don't like your job, you might be more inclined to have a negative attitude — but you could love your job and be stepping on the people around you without even realizing it.

The moral of the story is that when it comes to the workplace, being aware of how your behavior is impacting others — for the better or for the worse— is super important. And it's not just because it's generally advisable to be a decent human being (although that certainly matters); additionally, making strides to create a positive work environment, both for yourself and for those around you, will ultimately help you realize your career goals in ways that creating a negative one will not. No one's going to make you the CEO if you're filling their days with misery.

Here are a couple of key signs that you might be exhibiting toxic workplace behavior. But don't fret! It doesn't have to be difficult to whip that attitude back into shape.

Are you constantly offloading tasks and assignments to those around you? If a project goes wrong and it was your fault, do you look for ways around taking the blame? Avoiding responsibility for your work not only makes you look bad, but it also adds to the stress of those around you. The U.S. News & World Report points to chronic "avoiders" as one of the main types of workers that drive office-mates "to the edge of sanity."

The Fix: Learn to be upfront with everyone — and I do mean everyone. Even if you have to report bad news, transparency is always valued over avoiding responsibility.

2. You Talk About Co-Workers Behind Their Backs

We all need to let off a little steam when it comes to our co-workers; however, it's best to resist the temptation to blab about it to someone else you work with. Not only does this breed negativity in general, but it only serves to make others wonder, "What are they saying about me when I'm not there?" Additionally, a report recently published in the Harvard Business Gazette points to office gossips as sources of low office morale, high office turnover, and diminished productivity.

The Fix: If you really need to get something off of your chest, take it home with you and discuss it with your mom, your roommate, your best friend, or anyone else close to you that you don't see at the office every day. They'll understand.

The Fix: It can be so easy to get sucked into a cycle of negativity. Sometimes the whole culture of an workplace is negative. Make it your personal duty to be on the bright side and share the joy with your co-workers. It's not just for their benefit — I guarantee you'll find yourself feeling more positive, too!

4. You Stick To Cliques

It's the worst to end up in an office where everyone sticks to their own little groups and associating with anyone else is strictly forbidden. Seriously, I've seen episodes of Game of Thrones that were more tolerant than some office spaces. Perpetuating cliques is seriously no fun. Weren't we all thrilled when high school was over, anyway? A study published in the Journal of Applied Psychology suggests that workplace rudeness can actually "spread like a virus." Even if you think you're just sticking to your clan, you could really just be perpetuating a very negative office vibe.

Yes, there's such a thing as being too social — particularly when you're prioritizing organizing happy hours and sending chain emails over actually getting things done. Yeah, you may be the life of the office holiday party, but after everyone is done laughing at you're jokes, they're gritting their teeth and wishing you would just hurry up and answer their emails. Forbes cites "The Bad Influencer" as one of the worst workplace presences: In a survey, almost one-quarter of respondents said that the bad habits of the workplace good-time gal have rubbed off on them.

The Fix: Balance out your need to socialize with finishing tasks. If there's a cat GIF you just need to send to everyone in the office, try and finish three tasks before you send out the mass email. Prioritization is key, and using a tool like Pomodoro might help you start gettin' stuff did.

If you're a Broad City fan, you know that Ilana's workplace behavior is about as ridiculous as it gets. She's constantly late (if she shows up at all), she interrupts, condescends, and basically never gets anything done at all. If you find yourself resembling her workplace presence in any way, it's time for a reality check.

The Fix: Be more of an Abbi.