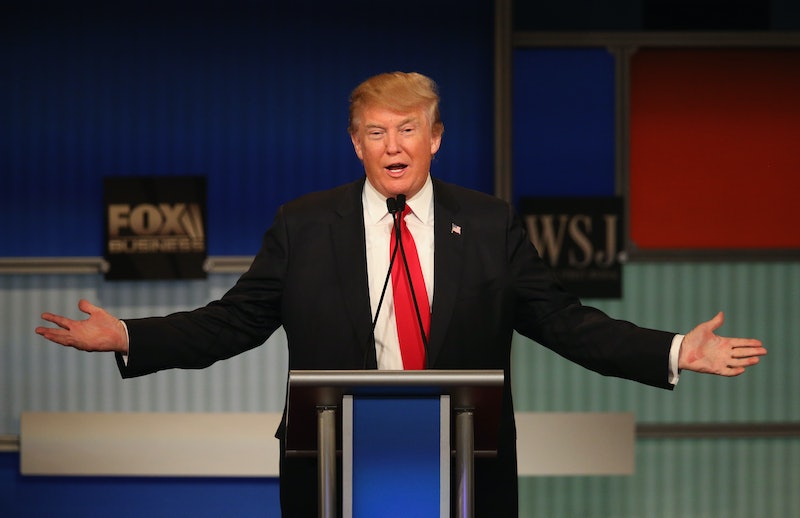 Donald Trump's presidential campaign has faced strong opposition from the beginning, but he alienated even more Americans when he said earlier in the week that all Muslims should be banned from entering the U.S. His opponents bashed his plan and the White House claimed his anti-Muslim comments should keep him from being president, with White House Press Secretary Josh Earnest saying Tuesday, "The fact is what Donald Trump said yesterday disqualifies him from serving as president." However, as much as many voters and politicians would love to see the real estate magnate kicked out of the 2016 election, disqualifying Trump for his ban on Muslims isn't the right answer — voting against him will send a more united message that America doesn't support his xenophobic policies.

A Wall Street Journal/NBC News poll revealed that 57 percent of Americans object strongly to Trump's anti-Muslim plan, while only 25 percent favor it. If a majority of Americans reject his religious limitations on immigration, it's important that those voters make their feelings clear to the outside world worried by the possibility of such a harsh policy. Disqualifying Trump from becoming president would prove that political leaders find his bigotry un-American, but the whole country sending that message would be a much stronger statement.

Trump's wish to bar all Muslim immigrants from the country directly violates the First Amendment right to freedom of religion and creates an inaccurate image of America as a country that doesn't trust Muslims as a whole. According to the Wall Street Journal/NBC News poll, 60 percent of Americans have a favorable view of Muslims despite an increased fear of terrorism following the Paris attacks and San Bernardino mass shooting. Whether Trump continues to run as a Republican or breaks free as an Independent candidate, rejecting him at the ballot box will prove to the world that everyone (or almost everyone) opposes his anti-Muslim rhetoric, welcomes Muslims to America, and supports the Muslims already living here.

It will also prove a larger point to Trump about his harmful policies. If he's kicked out of the race, he will undoubtedly claim that it was inappropriate and the American people want to see him in the White House (probably calling multiple people "idiots" in the process), but if the nation votes him down, he'll be forced to recognize that his xenophobia is unpopular.

On top of proving to Trump, Muslims, and the whole international community that Americans don't want to turn away immigrants and refugees based on their religious beliefs, it's important that other presidential candidates, politicians, and the media show the 25 percent of voters who do favor Trump's anti-Muslim plan why it's so problematic. Disqualifying him from the race would only anger these people, not change their minds about immigration. In order for the country to be a safe and welcome place for people of all faiths, there needs to be a positive rhetoric about allowing Muslims into the country so that Trump's supporters are given the knowledge and understanding to reject him as well. Nothing would be more satisfying than turning Trump's most faithful fans against him to create a more open society.