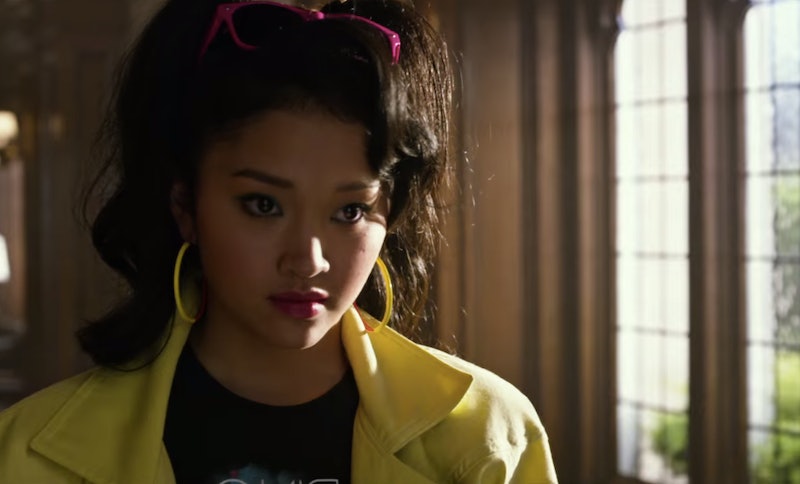 There aren't many things capable of making me feel excited about yet another comic book movie. The yearly onslaught of superhero movies, the majority of which feature barely any diversity or realistic female characters, let alone female leads, has left me a little fatigued. There's only one thing that might have changed my mind a little bit, and that's the appearance of one of my favorite female superheroes of all time, Jubilee (aka Jubilation Lee) in the new X-Men: Apocalypse trailer. The film won't be out until 2016, but it's still super exciting to finally see Jubilee in a fleshed out role, rather than merely named in passing as has happened in previous movies.

Played by Lana Condor in her feature film debut, Jubilee will be brought to life in the latest X-Men movie which also stars Jennifer Lawrence, James McAvoy, and Michael Fassbender. McAvoy recently gave an interview on Bravo about the character of Jubilee where he said, “She can kind of make fireworks come out of her finger in the cartoon, but I think in the movie they make it more like, ‘She is the mistress of electricity…’ But Jubilee is in the new movie, and she doesn’t suck at all.”

Hardly the most enthusiastic quote, but it doesn't stop me from feeling mighty excited that I'll finally get to see Jubilee on screen. Here's what the new trailer tells us, and what we know so far.

1. Our First Glimpse Of Jubilee

It might be the tiniest glimpse ever, but seeing Jubilee in costume like this is so exciting! From the classic yellow jacket, to the retro sunglasses, it's amazing to see her in all her '80s glory.

2. She's Styled On The Comics

She's staying true to the costumes her character wears in the comic books and cartoon versions, so it's reassuring to know that the filmmakers have paid attention to detail when it comes to introducing everyone's new favorite character.

Even the short glimpse of Jubilee's character in the trailer seems to hint at her badass attitude. Her take-no-prisoners approach to life is sure to come across in the movie.

With James McAvoy calling her "...'the mistress of electricity’ in the new movie" the trailer keeps us in suspense as to what Jubilee's powers will actually look like. But there are sure to be fireworks.

Watch the full trailer below and see all the characters for yourself.