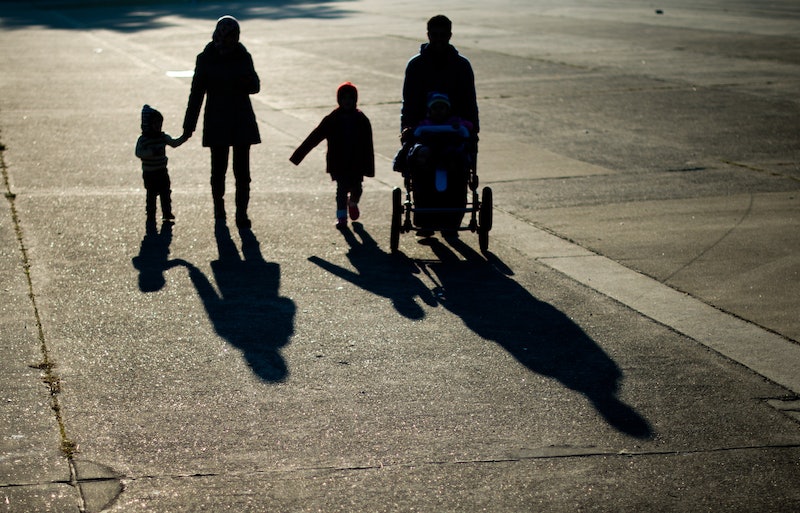 As possibly the world's most mysterious artist, Banksy never shies away from using his art to make political statements, and now he's entered the global discussion about whether or not Western countries should accept Syrian refugees following the terrorist attacks in Paris. With his latest painting, Banksy sends an important message about refugees — they helped build our society. On a wall of a French refugee camp in Calais, Banksy painted Steve Jobs (who you may recognize as the co-founder of Apple) with a knapsack draped over his shoulder and holding an old computer in the other hand.

The Calais camp, called "the Jungle," has become infamous for its lack of sanitation, medical care, and security, and you can see other graffiti right next to Banksy's in the photos that say, "Happy New Year," and, "Nobody deserves to live this way!" The English-based artist posted the new art on his website, confirming that the controversial painting was his work, with the caption "the son of a migrant from Syria." It's true — Jobs' biological father, Abdul Fattah Jandali, was a political refugee from Syria fleeing the country's destructive civil war. Jandali, now 84, lives in Nevada and is a non-practicing Muslim. However, Jobs only saw his birth parents as a "sperm and egg bank" and identified as the child of his adoptive parents.

Regardless of Jobs' rejection of his biological father, he was still the child of a Syrian immigrant and co-founded a company that changed the tech world and Americans' lifestyle. Banksy's new painting places Jobs in a Syrian refugee camp, making a statement that one of the world's most well-known and successful companies wouldn't exist if America hadn't allowed Jandali to enter the country.

At a time when many Americans, and Westerners in general, are afraid that ISIS terrorists will sneak into the country by posing as refugees, and a presidential candidate wants to ban all Muslims from entering the United States, Banksy is challenging the notion that refugees are only a threat or burden. If allowed refuge (and adequate resources), Syrians can be valuable members of our society — after all, America is a nation made up entirely of immigrants. Not every refugee's child might be as successful as Jobs, but it's important that the country start acknowledging their worth and the possible benefits to welcoming them. Banksy shouldn't have to point to one success story to prove that Syrian refugees can contribute to society, but he definitely got the point across.