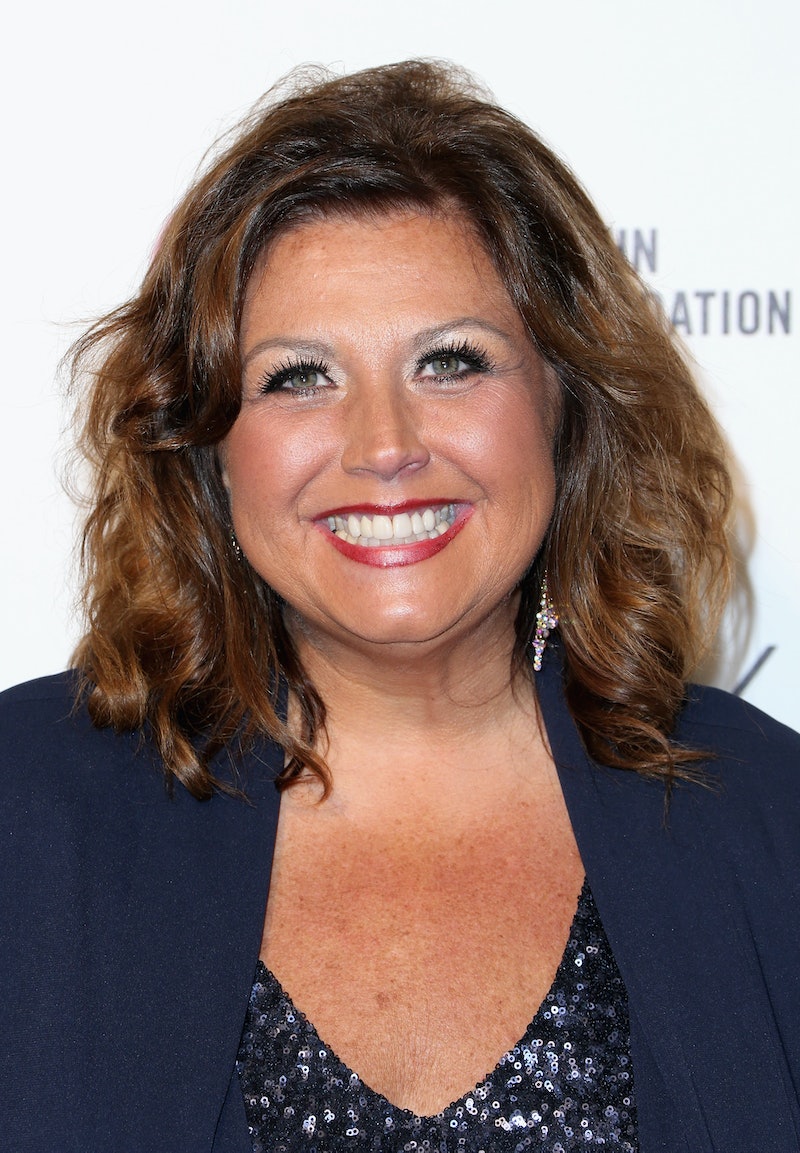 Sad news for Dance Moms fans: Abby Lee Miller may leave the upcoming season of Dance Moms . In a newsletter about Dance Moms upcoming season, the always candid Miller had some choice words for the crew of the show and hinted that conflict between her and one of the producers on the program may cause her to leave the series. She also writes that her hesitation is in part because she says that she wants to protect the integrity of her girls. "When a grown man tells me he wants one of my kids to portray a pregnant teen and wear a baby bump — I have to put my foot down. If that means not moving my foot and not working and getting fined in the process, well that’s a risk I am willing to take to protect my girls,” Miller wrote. “I am always teaching principles, integrity, and values in addition to dance technique. It is important for me that the girls learn to stand up and fight for what they believe in!" Bustle has reached out to Lifetime for a statement regarding the letter and Miller's potential to leave the series, but did not hear back at the time of publication.

This comes on the heels of another controversy for the star: the news that Miller was indicted on charges of fraud in October that could lead to up to five years behind bars and thousands in fines, if she is convicted. And there is already talk about the impending fraud trial making it to television, in fact, according to an first look released on ET, this subject is going to be a major focus for the remainder of the season. When asked for comment outside the courthouse of her arraignment, all Miller said to reporters was, "Season 6 jackets are on sale on the website Wednesday," according to People. Well, OK then.

But, amid all the drama, the show can probably still go on. Miller's possible exit from the show wouldn't be the first time a major star departed a reality show. In fact, it seems to happen quite often. These seven other stars left their respective shows, too.

When Conrad quit The Hills, she took the heart of the show with her. Although it continued on for only one more season after Conrad's departure, it wasn't the same.

NeNe Leakes departed from RHOA after Season 7, and she is still seen as a recurring guest on Season 8, but her presence it greatly missed. However, as with any of the Real Housewives series, it's not too hard to replace someone; you just need the right amount of drama and alcohol.

I'm still trying to figure out how this show engaged audiences for so long, but nonetheless, this wildly popular MTV show brought a lot of laughs and even more drama. Unfortunately, depending on how you look at it, Angelina Pivarnick couldn't handle the heat and only lasted for two seasons.

Draya Michele leaving Basketball Wives was a shocker for a lot of fans of the show. Personally, I think it was pretty necessary considering she is not a wife, and is also dating a football player... which kind of detracts from the premise of the show.

The quote above is pretty representative of her attitude during her entire time on the show. Basically, she finally got what she had been asking for.

This was the perfect example of a relationship that went 100 to 0 real quick. Yes, I said that right. The couple started off so in-love, but as the season's went on you could see the marriage falling apart at the seams. Thread by thread, until Jon had enough and left the show — and Kate.

The news that Tia and Tamera Mowry would star in their own reality show was met with great excitement. While the show lasted for a solid three seasons, the twins decided to go separate ways — from the show, not each other.

I am hoping to see lots more of Miller on the upcoming season of Dance Moms. But if not, I have learned that the show truly must, and can, go on.

More like this
The Kardashian Forerunners
By Mariah Smith
How Reality TV Stars Conquered Your Bookshelves
By Anna Peele
Everything We Know About Chèrie & Jessey’s Abrupt Exit From Bling Empire
By Alyssa Lapid
Scott Disick’s First Time Around Kravis Was “Awkward,” To Say The Least
By Jake Viswanath
Get Even More From Bustle — Sign Up For The Newsletter