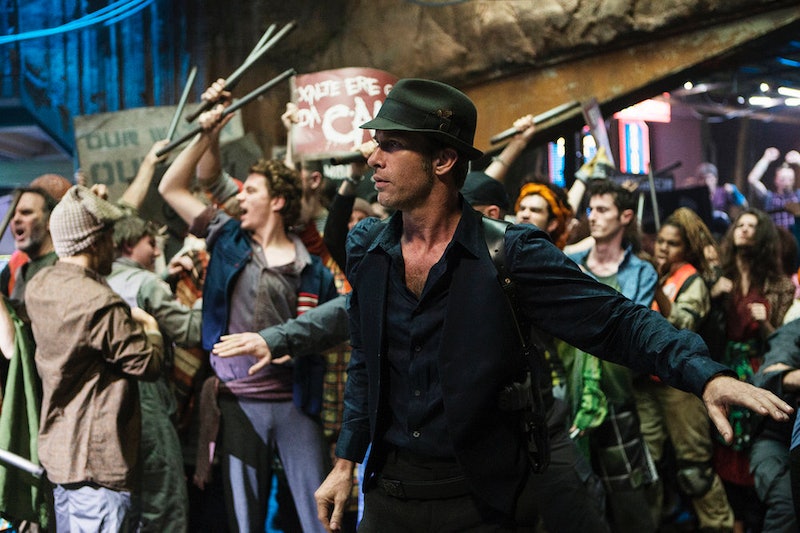 One of two new Syfy miniseries based on classic pieces of science-fiction literature, The Expanse will premiere on Monday night alongside Arthur C. Clarke adaptation Childhood's End. With these series, it looks like Syfy is stretching beyond breezy original shows like Z Nation and cheesy specials like the Sharknado franchise to adapt popular sci-fi books for television, which is something to be excited about. The Expanse is a dark, gritty tale about survival, politics, and conspiracy set against the backdrop of a futuristic world where the solar system has been colonized. There are a lot of elements at play in this world, but luckily, The Expanse cast seems up to the challenge. The story centers on three disparate figures across the solar system: a detective, a politician, and the crew of an ice freighter, who become connected to determine how one missing woman could be the loose thread that unravels a great conspiracy that threatens humanity's continued existence. See what I mean by challenge?

Based on the the series of novels written by James S.A. Corey, The Expanse appears to be reminiscent of the swashbuckling space series Firefly as well as political drama among the stars, Battlestar Galactica. Like both of these series, The Expanse has a — wait for it — expansive cast of actors and characters that bring this diverse world to life. Syfy has assembled a great collection of characters that are sure to infuse the world with the humanity that makes Corey's book series so successful. Here's a look at the cast of The Expanse, plus what we know about their characters from Syfy's descriptions, as well as Corey's novel.

Detective Miller is our hard-boiled protagonist, whose rough-and-tumble nature opens up a whole world of secrets for the characters of The Expanse. Thomas Jane, who plays Miller, is no stranger to science-fiction having played the titular role in the 2004 rendition of The Punisher, and starred in The Mist, based off a Stephen King novella. He's also known for his performance as actor Thomas Jane in the cult classic series Arrested Development.

Steven Strait has been a working actor for about a decade now, after making his big-screen debut as the villainous "Warren Peace" in the 2005 film Sky High. Since then, he's made a name for himself as "Stevie" Evans on the Starz original series Magic City. On The Expanse, he plays Jim Holden, 2nd officer of the ice freighter Canterbury, which serves as home for most of the characters.

The martian-raised Alex Kamal serves as the pilot for the ice freighter Canterbury, and helps quench the character's thirst for adventure he gained while in the navy. Kamal is played by Cas Anvar, who has become experienced in the science-fiction genre through projects like the Jake Gyllenhaal film Source Code, and the Syfy series Olympus.

Dominique Tipper is a fresh face to the medium of television, having appeared primarily in independent film projects prior to her role as Naomi Nagata on The Expanse. Naomi is the ice freighter Canterbury's engineer with a strong talent for machinery, and not as much talent for dealing with other people.

Amos Burton is an earthling with a dark past that he doesn't talk about. Although he serves as a mechanic on the Canterbury, Burton has a knack for violence and knowledge of the seedier parts of the world. Amos is played by Wes Chatham, who should be very familiar with the science-fiction genre after playing Castor in The Hunger Games: Mockingjay Part 1and Part 2.

Although she's been working in film and television for over a decade, Florence Faivre hasn't been getting many roles she could sink her teeth into — Playing an unnamed "Hot Secretary" on two episodes of Kings probably isn't the best opportunity to showcase one's talents — but now she has the chance to portray the conflicted, mysterious Julie Mao. Mao's disappearance after rejecting her families and becoming a humanitarian is the catalyst for the unravelling of the conspiracy that Miller and the crew of the Canterbury come across.

Veteran actress Shohreh Aghdashloo is one of the most accomplished members of the cast, having recieved an Academy Award nomination for the film House of Sand and Fog, and won an Emmy in 2009 for her role as Sajida Huusein in the miniseries House of Saddam. Aghdashloo plays Chrisjen Avasarala, a leader in the UN and a member of a long-standing political dynasty. Whatever the conspiracy threatening makind is, it's likely that Avasarala is involved in one way or another.

With such a strong main cast, and supporting roles featuring actors like Chad Coleman (The Wire, The Walking Dead), Jared Harris (Mad Men), and Jonathan Banks (Breaking Bad, Better Call Saul), The Expanse may very well prove to be the military-space-noir that you never knew you needed in your life when it premieres on Syfy this Monday at 10 p.m.