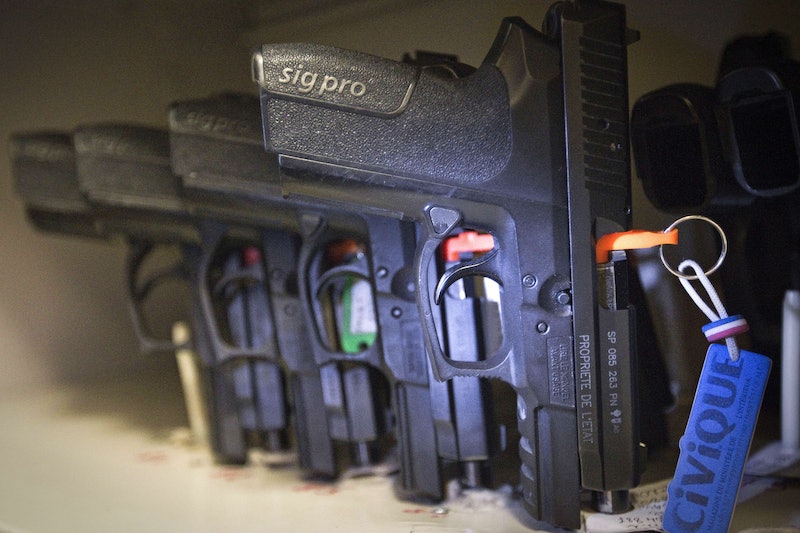 In response to the San Bernardino mass shooting that killed 14 people and wounded 22 others on Dec. 2, a Texas-based high-tech backpack company called iBackPack is creating a bulletproof backpack to help protect people for the unexpected. The company already raised more than $500,000 on Indiegogo and plans to launch a Kickstarter soon, but instead of relying on a bulletproof backpack to respond to mass shootings, the country needs to work on ending gun violence. Equipping Americans with protection only puts a Band-Aid over the gaping wound caused by the nationwide epidemic.

In a press release, iBackPack founder and CEO Doug Monahan said: "It's about time some sort of system is provided to students, professors, business people — everyone — short of arming them with weapons — these days people need bulletproof shields and the iBackPack can provide same." Like iBackPack's original product, the iBackPack 2.0 will be able to become an Internet hotspot that up to six people can connect to, include a portable battery, chargers, and a Bluetooth speaker, and set off an alarm in emergencies letting friends, family, and the police know the user's location. The new version, however, will also have a Kevlar-style plate that will apparently make it bulletproof. While the technology in and of itself is exciting and would definitely come in handy in a variety of emergencies, it won't fix the problem.

Even the company conceded that a bulletproof backpack isn't a long-term solution, as Ile Jugovski, iBackPack's vice president, said in the press release. "The 'bulletproof' option to the iBackPack is only a temporary — but effective solution," Jugovsky said. Since it's agreed that this is only a Band-Aid fix, wouldn't it be more effective to work toward decreasing gun violence in lieu of donating hundreds of thousands of dollars to build personal shields?

If America continues to focus on short-term solutions, the country will be in the same position in 50 years. With mass shootings happening more often than ever before, lawmakers need to look at the root of the problem and make automatic and semiautomatic weapons less accessible. Violence doesn't stop when citizens have bulletproof accessories or other types of protection.

It's also important to note that these backpacks probably won't be cheap (though iBackPack hasn't announced a price yet), which means only those with enough money to buy protection will be safe in shooting situations. So, this isn't even a temporary solution for everyone, as the poor would still be left vulnerable. Americans shouldn't have to buy their security and real gun safety certainly shouldn't discriminate.

A high-tech backpack that could also protect you in a shooting may make you feel safer, but it won't prevent the shooting from happening in the first place. It's time to spend the country's resources actually ending the violence.

More like this
Michigan’s Governor Is “Going To Fight Like Hell” To Protect Abortion Access
By Andrea Zelinski
When Did Tamagotchi Come Out? In The U.S., 25 Years Ago
By Kaitlyn Wylde
How To Fight For Reproductive Rights, Based On How Much Time You Have
By Courtney Young
LGBT+ Men Fleeing Afghanistan Were Denied Asylum By The Home Office, New Findings Show
By Sam Ramsden
Get Even More From Bustle — Sign Up For The Newsletter