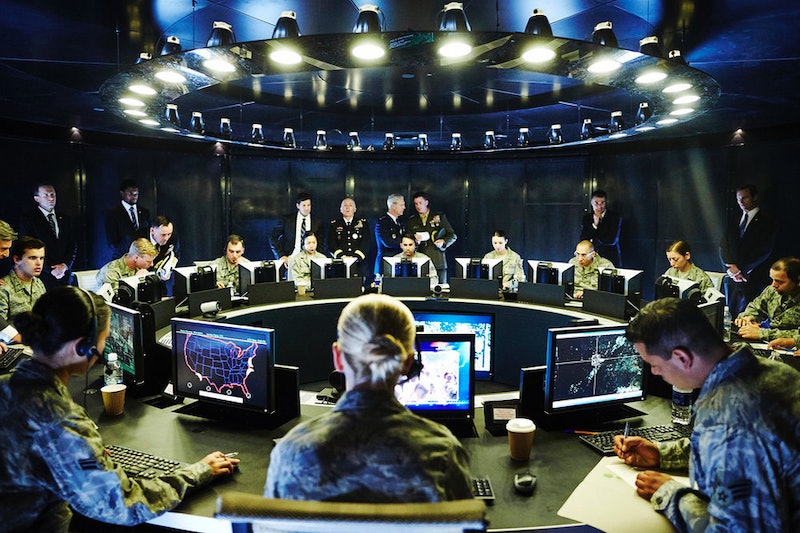 Syfy's latest miniseries may be one of the most lofty adaptations of a book you're ever likely to see on television, that of Arthur C. Clarke's 1953 novel Childhood's End. It features lofty subject matter, as the novel explores a variety of difficult-to-comprehend topics including mysterious aliens, psychic research, the relationship between space and time, an omniscient cosmic intelligence, and Ouiji boards. It's unclear how close to Clarke's vision the Syfy series will be, but luckily there shouldn't be any problems in the acting department, as the cast of Childhood's End is fantastic and should have no problem tackling the high-brow ideas that the source material poses.

The original novel follows humanity over the course of decades, after a mysterious alien force has come to Earth to prevent the extinction of the human race, leading the planet into an age of prosperity. However, it soon becomes apparent that although the aliens are interested in preserving the human race, they are not interested in everything that makes humans unique, including creativity and expression. The Syfy miniseries seems to condense these events into the course of a few nights, as the episodes are all titled "Night One," "Night Two," and "Night Three." The show has also switched around some characters, so whether you're familiar with the book or not, here's a handy guide to everyone you'll meet on Childhood's End, according to Syfy's character descriptions and their book backgrounds.

The novel's Ricky Stormgren is the UN Secretary-General, and acts as the liaison between humans and the mysterious alien force. The miniseries' Stormgren is still the alien liaison, but this time, he's a Missouri farmer who is hand-picked by the alien force. Stormgren is played by Mike Vogel, who should be used to mysterious forces overtaking small-town life after playing Dale "Barbie" Barbara in Under The Dome.

In the book, Rupert Boyce is a veterinarian who has amassed a large collection of books on psychic and paranormal research, which makes him a valuable asset to the Overlords. In the series, Boyce is the founder of a research center dedicated to the very same topic — and is equally desired by the Overlords. Rupert Boyce is played by Julian McMahon, best known for playing the hedonistic Christian Troy on Nip/Tuck.

Tywin Lannister himself portrays Karellen, Earth's "supervisor" as the mysterious alien race descends on the planet. It's unclear how actor Charles Dance will appear in the series, as in the book the aliens have an extremely unique appearance.

Yael Stone is best known for her portrayal of Lorna Morello on Orange Is The New Black, but the Australian actress is taking on a very different role in Childhood's End. Peretta Jones is an original character unique to the television series, a woman who is empowered by her faith to discover what the Overlords' true intention is.

Ellie Stormgren is another new character to the series, the wife of farmer-turned-alien liaison Ricky Stormgren. Ellie is played by Australian actress Daisy Betts, who has been featured in television series including The Player, Chicago Fire, and Last Resort.

In the book, Jake Greggson is a key observer of what occurs on Earth after the arrival of the alien forces. It appears his role will be primarily unchanged in the miniseries, where is portrayed by Ashley Zukerman, known for playing Charlie Isaacs on the series Manhattan.

Named Jean Morrel in the book, Amy falls in love with Jake as the alien overlords arrive and complicate everything. Jean plays a very important role in the alien occupation of Earth, and it seems the same will stay true for Amy on the series. She is played by Hayley Magnus in her first major role.

Rachel Osaka is an employee at the Boyce research center and seems to have no direct correlation to a book character. Osaka is played by Charlotte Nicdao, who is known for playing Jenny on the series Please Like Me.

Milo Rodricks, named "Jan" in the novel, is a curious human who seeks to know the truth behind the Overlords, and ends up as a witness to their true intentions. It appears he will play the same role in the series, but this time as an employee of the Boyce research center. Milo is played by Osy Ikhile, known for his roles in recent films such as Mission Impossible: Rogue Nation and In The Heart Of The Sea.

We'll have to tune into the premiere of Childhood's End on Monday night at 8 p.m. to find out how else it differs from the book.

More like this
What Makes A Sally Rooney Sex Scene So Hot?
By Samantha Leach
Here’s Everything Coming To & Leaving Netflix In June
By Alyssa Lapid
Drag Queen Drama 'Femme' Is A Fresh Take On The Classic Revenge Thriller
By Sam Ramsden
'Heartstopper's Kit Connor Revealed His Hopes For Season 2
By Nola Ojomu and Sam Ramsden
Get Even More From Bustle — Sign Up For The Newsletter