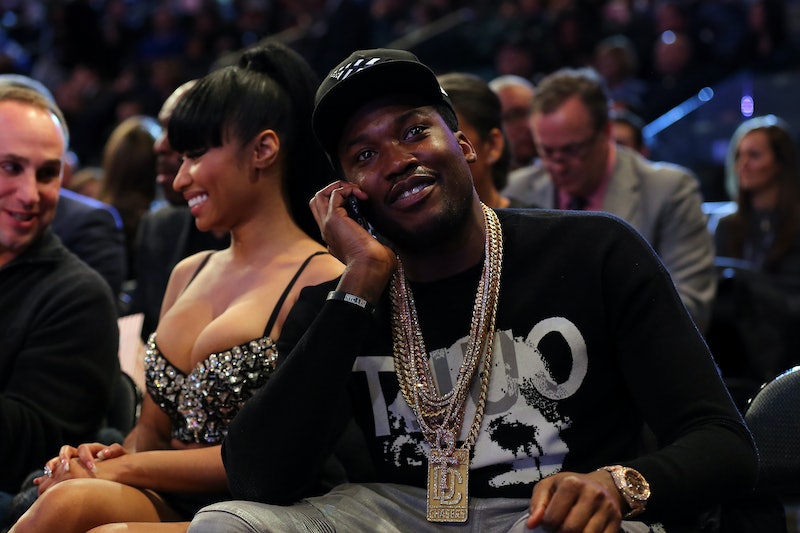 As much as I love Aubrey Drake Graham (which is a whole hell of a lot) I think some of my fellow fans need to calm down. In perhaps the weirdest chapter in the Drake/Meek Mill feud, the beef now involves an awards show, a diss track, a probation hearing, and Nicki Minaj. The latest? According to The Philadelphia Inquirer, Drake fans tried to get Meek Mill arrested.

On Friday, Meek Mill had a hearing in Philadelphia for allegedly violating the terms of his probation related to a 2008 conviction for firearm charges. During the hearing, prosecutor Noel DeSantis said Meek was called to court for allegedly violating his probation by "repeatedly changing his court-approved travel schedule and ducking a drug test," according to the Associated Press. DeSantis also revealed that Drake fans wanted him arrested.

DeSantis shared that fans of the 6 God "blew up" her phone begging her to arrest Meek once they heard he allegedly violated his probation. You used to call me on my cellphone... late night when you want me to use my legal standing to further a hip-hop feud.

If you'll recall, Drake put out two diss tracks against Meek over the summer after the latter accused the Toronto rapper of using ghostwriters for his songs. Drake responded with "Charged Up" and "Back To Back," Oh, and one of his diss tracks was just nominated for a Grammy.

What I want to know is: How did Drake fans find the prosecutor's phone number?! I applaud their persistence, but clearly they are not committed to the law, they just want to see Meek lose this fight.

I guess Drake fans will use whatever ammunition they've got. But Meek has a secret weapon, too: Nicki Minaj, who testified in the hearing on Friday. According to The Philadelphia Inquirer she said that she wanted to help Meek from becoming "just another statistic." The Associated Press reports that she she offered this testimony: "He's not perfect, but I can't believe how much he's changed."

Defense lawyer Frank DeSimone claimed any issues Meek has had with his travel schedule are just part of his particular circumstances as a rapper. DeSimone said, "His life is chaos. It's more immaturity than anything else. This is almost a child. He's 28."

Obviously, I am on Drake's side in all things, but even Aubrey would probably find it fighting below the belt to bring Meek's legal troubles into this. I doubt he will release any tracks about this new chapter in the two rappers' feud, especially since one of his best friends, Nicki Minaj, actually stepped up to testify on Meek's behalf. But seriously, Drake fans, hounding a prosecutor is really taking it to another level that does not need to be reached.

According to the AP, "Common Pleas Judge Genece Brinkley threatened to send Mill to jail when the hearing resumes Dec. 17. as she did for a few months last year."