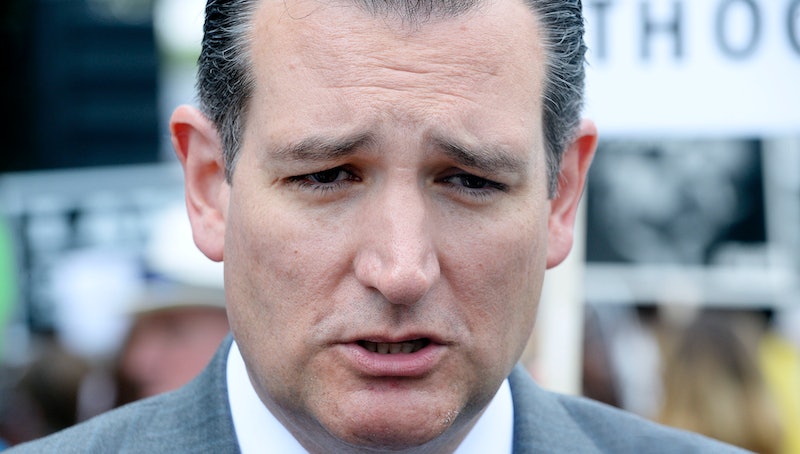 Ted Cruz is getting creative. While it's never exactly been a secret that the Texas senator and 2016 presidential candidate is extraordinarily right-wing, the bizarre way in which he wants to ban abortions is raising eyebrows. In recent comments to conservative commentator Robert George, Cruz explained that, if elected president, he wouldn't need a constitutional amendment overturning the historic 1973 Supreme Court decision Roe v. Wade to outlaw abortion. Instead, he suggested that Congress could simply maintain strict "personhood" language and utilize the already-established 14th Amendment to its advantage.

In a Nov. 25 interview on George's Candidate Conversations 2016 talk show for Catholic network EWTN, the host asked Cruz whether he believed the courts needed to overturn Roe v. Wade prior to criminalizing abortion. "Do you believe that unborn babies are persons within the meaning of the Equal Protection Clause of the 14th Amendment, and if so, will you call on Congress to use its authority under the 14th Amendment pursuant to Section Five, to protect the unborn?"

"Absolutely, yes," Cruz replied emphatically, affirming that in his opinion, there was no need to wait for the Supreme Court to make a final decision. "[We can do it] under the 14th Amendment."

In layman's terms, Cruz proposed working around that pesky Roe v. Wade by asking Congress to establish all fertilized eggs as "persons" under the Constitution, thereby making any abortion a criminal, violent act punishable to the fullest extent of the law.

"I think the first responsibility of everyone in public office is to protect life," Cruz added. "In fact, if you look at the Declaration [of Independence], that ordering of unalienable rights — life, liberty, and the pursuit of happiness — I think is a very deliberate ordering. Without life, there is no liberty."

Of course, that solution is a stretch, but Cruz is grabbing whatever he can and running with it at this point.

This notion isn't exactly a new one for the Texas senator. As far back as 2012, Cruz has been pledging to uphold and co-sponsor any personhood legislation that crossed the Senate floor. In August of this year, he again signed the Georgia Right to Life PAC's Personhood Affirmation, supporting a personhood amendment and thereby earning himself the group's coveted campaign endorsement. So far, it seems that vowing to criminalize abortion through constitutionally creative means has been working out just fine for the candidate.

This hasn't gone without criticism. In a post on her official campaign website Dec. 2, Democratic presidential frontrunner and former Secretary of State Hillary Clinton accused Cruz of trying to limit access to contraception by levying that same personhood language in his favor. "[...] Cruz has personally tried to make it harder for women to get birth control," wrote a Clinton staffer in a blog post. (That claim has since been disputed by Politifact, which agreed that Cruz was using the idea to try to criminalize abortion, but found assertions that he had also tried to ban contraceptives to be a step too far.)

Whatever the case, it doesn't seem like Cruz's dreams of a personhood amendment are going away anytime soon. At least, not until his dreams of the White House have been struck down completely.