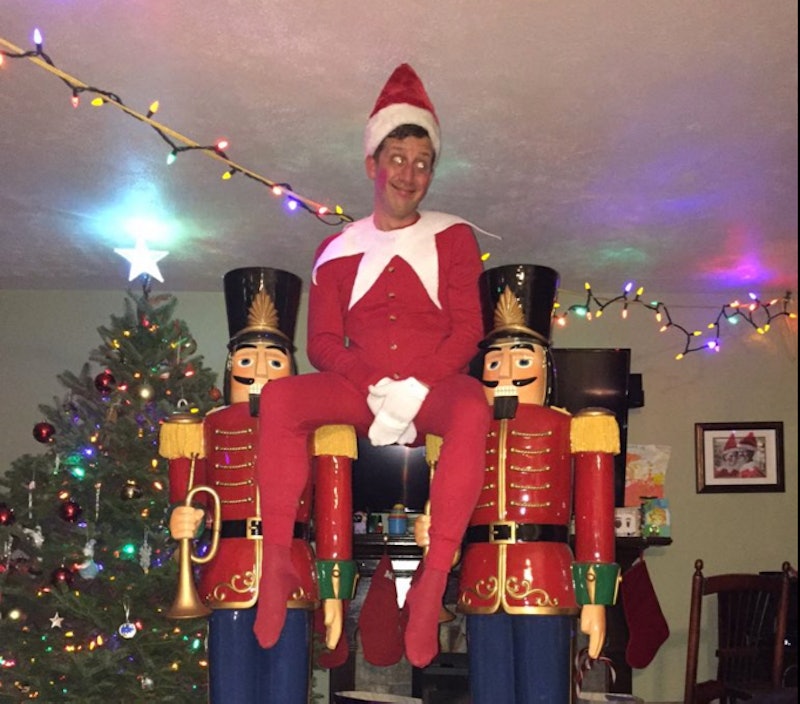 While some Christmas traditions are very well-known, I recently learned about Elf on the Shelf. Turns out it was just in time for me to understand what on earth this man posing as the Elf on the Shelf was doing. In fact, this Twitter account has been so dang entertaining that it's pretty much winning the holidays. As a Jewish person who doesn't celebrate Christmas, even I can appreciate someone doing a great bit.

For those of you, who like me, are not in the know: The Elf on the Shelf is a children's book. It tells a story of Santa's elves, who watch over all of the kids of the world, to make sure the kids are being nice and not naughty. In case you think that sounds creepy or weird, take a moment to really think over the entire Santa concept before judging. The man is a fully grown adult that climbs into your house while you sleep and eats your food. THAT'S creepy.

So the book then inspired a time-honored tradition of overachieving parents everywhere, who went out and bought their own version of the Elf on the Shelf and hid them around the house in a different place for the 25 days leading up to Christmas. For families with young kids, this is a fun family activity, and often the incentive to get whatever tiny chocolate is in their advent calendar that day (the Christmas swag is so real for these kids).

Precious, right? Enter Megan Wynberg, who is using the hashtag #FLEontheshelf to chronicle her husband Joe Wynberg as he turns this tradition on its head by becoming the real life Elf on the Shelf, posing in various setups that don't ~quiiiite~ align with the book. Some of the photos are ridiculous, genius, and downright hilarious. If you have the chance, I suggest following the account on Twitter, because the account will be posting pictures all of this month for the delight of people such as myself. Below are some of my favorites so far.

I have so many question about this. First, how much money did they spend on all that tape? Second, how long did this take to set up?? Thirdly, how will he get down?!?! (Oh, right. Magic! I forgot.)

Oh, boy. This is not going to be fun to clean. I won't lie, this does look like something I want to try out once in a blue moon with my kids. It's messy but it looks like the greatest memory you can make in a kitchen!

Not sure if this as part of the book or not, but either way, I am so down for poop jokes.

Wow. This looks cold and dangerous. I like the combination.