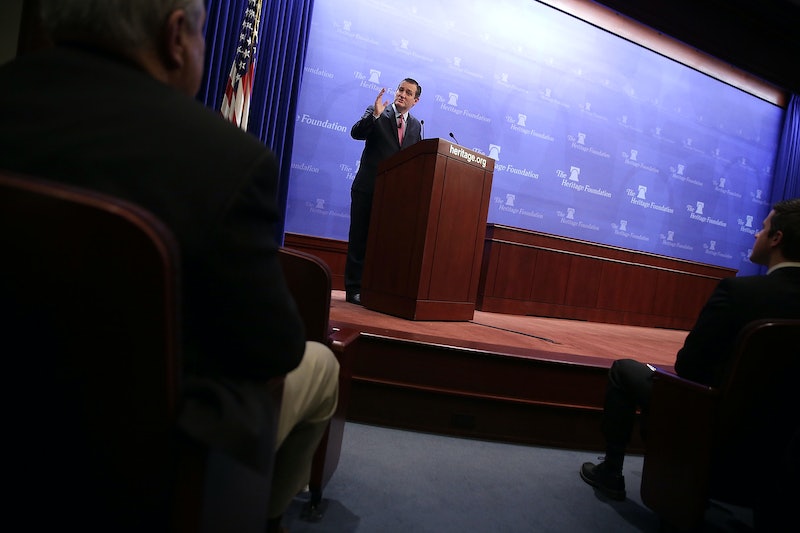 Christmas is coming a little bit early this year: There's another Republican debate on Dec. 15! Yay, right? The last GOP debate of the year will air on CNN, and since it'll be available to stream for free, you've got no excuse not to watch it — other than, of course, the desire to avoid being infuriated by non-stop platitudes and grandstanding. Speaking of platitudes and grandstanding, Ted Cruz is the candidate in the GOP debate to watch this time around, because the next debate could be a turning point for him and his campaign.

Although Donald Trump has received most of the media attention, Cruz's campaign has been just as big of a surprise this cycle. When he announced his presidential campaign in March, just about nobody gave him a serious chance, largely because of his extreme far-right positions and alienation of the GOP establishment during his time in the Senate. But he's run a very shrewd campaign — better than any of his opponents, according to The Washington Post — and in a recent poll is actually now leading Trump by 10 percent in Iowa.

Cruz has managed this, in part, by declining to directly criticize Trump. Ever since Trump launched his juggernaut of a campaign, Cruz has said almost nothing but positive things about the casino magnate; the strategy, as Cruz himself has hinted at, is to endear himself to Trump's supporters so that, if and when Trump's campaign collapses, Cruz will be able to inherit his supporters. Compare this with Rick Perry and Bobby Jindal, who both attacked Trump relentlessly to no effect and ultimately ended their presidential campaigns in disgrace.

It's a cute idea, but alas, it can't last forever. After all, the two men are still competing for the same position, and if both continue to poll well, they'll eventually have to get into the mud with one another. Early in December, a report surfaced that Cruz cast doubt on Trump's "judgment" at a closed-door fundraiser. This prompted Trump to predict, via Twitter, that Cruz will soon go on the attack against him.

This debate could be the end of the Cruz-Trump detente. While it still seems unlikely that Cruz will go on the offensive against the real estate magnate on Tuesday — Cruz called Trump "terrific" even after the Donald taunted him on Twitter — the opposite could happen. This would force Cruz into finally attacking Trump, which would mark the beginning the inevitable slugfest between the two. Alternatively, if Cruz responded to an insult from Trump by praising Trump, that would simply be a bizarre spectacle to behold on a national debate stage.

Either way, the status quo of this race would be shattered. Because they are competing for the same votes — Cruz is the favorite second-choice pick of Trump supporters — there won't be room for both candidates for much longer. This debate could be the beginning of the end for either Trump or Cruz, and either outcome would be arguably be significant developments in the campaign so far.