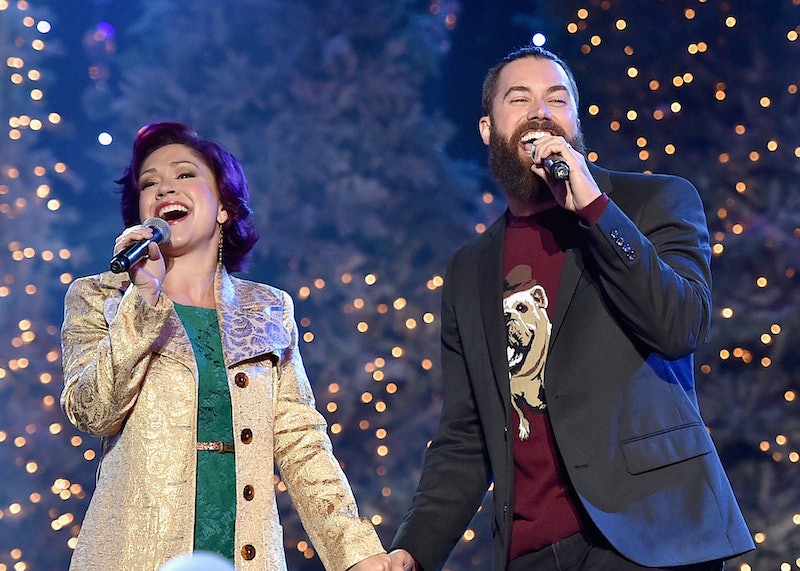 If you're feeling nostalgic about American Idol as its final season approaches, don't fret — the Hollywood Christmas Parade basically doubled as a reunion concert for the show's alums. With performances by Clay Aiken, Daughtry, Diana DeGarmo, Candice Glover, Taylor Hicks, Ruben Studdard, and Ace Young, there was no shortage of former American Idol contestants at the Hollywood Christmas Parade. And, I must say, they sounded better than ever as they brought the Christmas cheer to sunny California. Although Grumpy Cat was my very favorite celeb at the parade, it was great to see (and hear) some of the show's most talented contestants.

Candice Glover was the first American Idol alum to take the stage, and her performance of "Have Yourself A Merry Little Christmas" proved once again why her Season 12 win was so well-deserved. Next up was Clay Aiken, who has kept busy since appearing on Season 2 — he's been heavily involved in politics and philanthropy, and is now a proud parent. Aiken performed "The First Noel" and reminded us why he was a fan favorite.

Since placing fourth on Season 5 of American Idol, Chris Daughtry has formed his own band and their energetic performance of "Long Live Rock & Roll" had everyone in the audience singing along and clapping. It was undoubtedly one of the highlights of the parade. Most of the performers opted to sing classic Christmas tunes — Diana DeGarmo and Ace Young, the only two American Idol alums who ended up married to each other, took the stage to perform a rendition of "Baby It's Cold Outside" that rivaled Buddy the Elf's.

Ruben Studdard performed "Christmas In Your Arms," and his voice sounded clearer and better than ever. No Christmas celebration would be complete without "Silent Night," and Season 5 winner Taylor Hicks was the perfect singer to perform the classic.

The abundance of American Idol alums definitely felt like a blast from the past (in the best way possible), and viewers were happy to see these beloved contestants back on the small screen:

There's no denying that American Idol has created beloved stars, regardless of whether or not they brought home the ultimate prize. And who needs a reunion tour when you've got the Hollywood Christmas Parade?