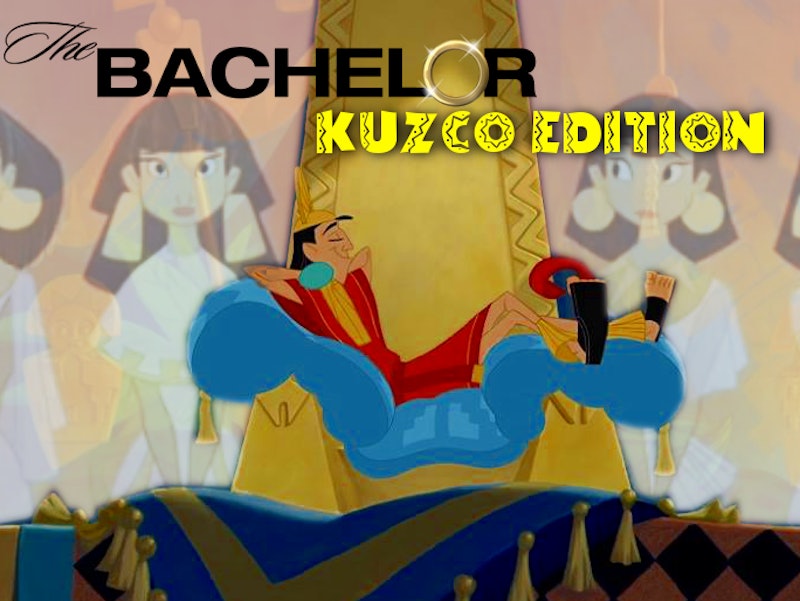 The Emperor's New Groove is so unlike the Disney animated classics of yore: It's irreverent, quirky, off-beat, and isn't afraid to have tons of attitude. At the beginning of the 2000 flick, Kuzco is unabashedly self-involved and rejects a whole line of women for superficial reasons. So, that got me thinking: What if Kuzco from The Emperor's New Groove had a season of The Bachelor ? Naturally, ABC would choose him because he's a catch: Kuzco is a rich and powerful emperor, who is already affiliated with ABC/Disney (synergy!). But will he be looking for love for the right reasons? (At first, probably not.)

The Disney comedy is celebrating its 15th anniversary and it actually came out in 2000, a little before The Bachelor premiered on ABC in 2002. So that kind of makes this Emperor's New Groove scene ahead of its time. At the beginning of the movie, Kuzco is brought in to choose a wife from a lineup of women who all look vaguely similar (and fearful of him). He rejects them for reasons like "hate your hair," "not likely," and "let me guess — you have a great personality." Ouch. A little harsh there, Kuzco? See the scene for yourself below.

So, how would a Kuzco-led season of The Bachelor go? Come with me and let's imagine — with some Photoshop thrown in, of course.

Kuzco Rejects All The Ashleys For "Throwing Off His Groove"

So many Ashelys that it seriously bugs Kuzco. He tosses them all out of the competition, because his groove is affected in a major way.

Of course, ABC and Harrison himself dismiss this and go on with the show. But, it does make all the specials pretty tense between Kuzco and Harrison.

Once all of the Ashleys are gone, Kuzco feels he can better decide who to give roses to — but he still lists off what he doesn't like about the women left, totally missing the point that he is eventually going to have to choose one of these women. So he decides to arbitrarily eliminate one random woman a week, like Bachelor roulette.

The ABC promos would declare that this big twist CHANGES EVERYTHING. And it does. Kuzco is now a penniless llama, and now viewers will find out for sure who is here for the right reasons.

The Women Seriously Discuss If They Want To Marry A Llama

One woman confesses, "But we were here — for the right reasons — to find love with an emperor! He's not the man I thought he was — and he's not even a man anymore. I'm just so confused about everything." Some women, though, don't care about the llama thing and want to marry Kuzco no matter what.

By the end of the season, Kuzco does find his true love, even as a llama. But like most Bachelor engagements, this one is short-lived. Even emperors-turned-llamas aren't immune to the Bachelor curse.

More like this
Becca Tilley Confirmed Her & Hayley Kiyoko’s 4-Year Romance With A Heartfelt Note
By Brad Witter
What’s New On Netflix: A Victoria Justice Rom-Com & The Return Of David Letterman
By Arya Roshanian
'Doctor Who’s New Star Is Already Huge On TikTok
By Maxine Harrison
What Is Mandy Moore’s Net Worth?
By Hugh McIntyre
Get Even More From Bustle — Sign Up For The Newsletter