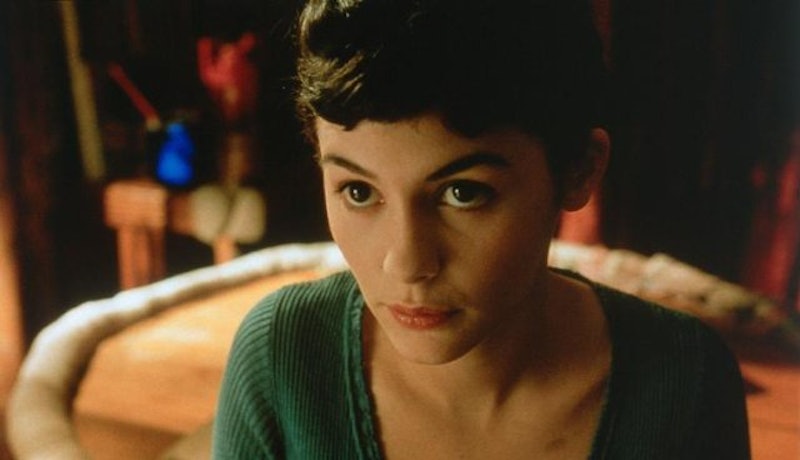 I was just wondering whether the director of one of my favorite films had made more movies — and then, like a picture of a garden gnome arriving in the mail, I hear that Amélie director Jean-Pierre Jeunet is making a movie that he says will be in the same spirit as his famous classic Amélie. Speaking at Marrakech Fest this weekend, Jeunet revealed that his upcoming project will explore themes of sexuality through an imaginative, whimsical lens — and that he's using a similar approach to how he made Amelie, collecting souvenirs related to the theme of sexuality that will eventually populate the movie. "That’s how we came up with the idea of the gnome that travels around the world," he revealed. "We have a good sense of scent for interesting tidbits, a bit like a dog who knows where to find truffles.”

He also revealed that he appreciates directors who stick to their vision, rather than branch out into new styles, and he isn't a big fan of realism, as you probably already know. Jeunet has, in fact, helmed quite a few acclaimed projects since Amélie — including A Very Long Engagement, which also starred Audrey Tautou, and The Young and Prodigious T. S. Spivet, which starred Helena Bonham Carter. He also recently directed the pilot of Amazon's Casanova, which he revealed at Marrakech inspired him to delve more deeply into sex, but more on his own terms.

So, if his new project is going to be inspired by Amélie, what sorts of themes should it borrow? Here are some of the quirks from Amélie I'd love to see in his new project:

The narration of Amélie is perhaps key to its warmth, suggesting that Amélie is not truly alone in her isolation. It also adds to the humor and distinct aesthetic of the movie, so I hope this upcoming film also includes a narrator.

On a similar note, I love how much silence and aloneness there is in Amélie; while some moments are sad, many more seem appreciative of that isolation, a rarity in film and in life. While a movie about sex might necessarily have less alone time, I bet it will still include those moments of quietness.

Jeunet's comments about souvenirs give me hope that his upcoming movie will include an appreciation of those little objects and moments that have so much to do with why people Amélie.

Amélie included a few fleeting moments that strayed from realism, a couple blink-and-you'll-miss-it dream-like qualities that hinted that Amélie's world was not totally tied to the real world. Jeunet promised more "fantasy and imagination" in his new movie, so this seems likely to return.

There were many funny moments in Amélie, and quite a few of them related to sex. Hopefully, Jeunet will be able to include more moments making fun of the ridiculous awkwardness of sex in his upcoming film.

I love that Amelie took over the narrator's job to whisper conspiratorially to the audience, and I hope this trick makes it into the next movie.

I know I still listen to Amélie's soundtrack when I need something to work to or lift my spirits; wouldn't it be amazing if Yann Tiersen could create the soundtrack to Jeunet's new film? I can only hope.

While it looks like the film is still in its early stages, I know what I can do in the mean time: familiarize myself with Jeunet's other films, which I'm sure are chock full of small and beautiful moments and carefully chosen souvenirs.