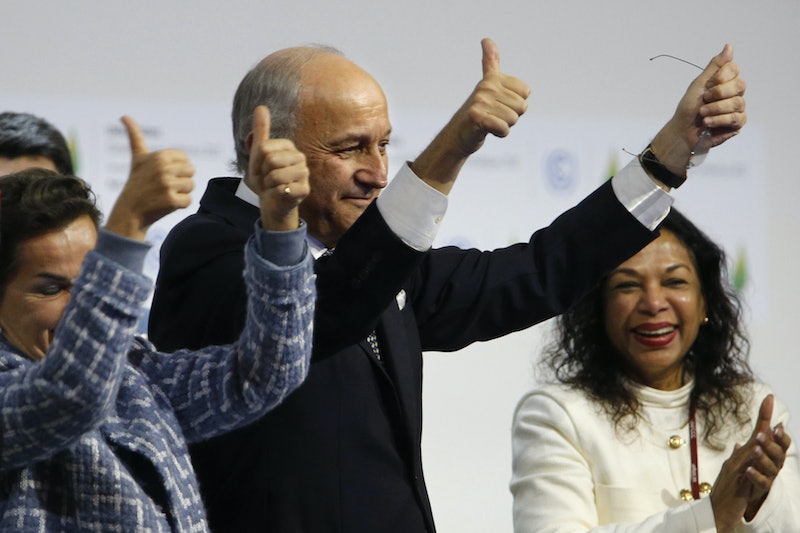 On Saturday, the United Nations struck a massive agreement aimed at slowing and limiting climate change, perhaps the biggest existential threat of our time, which could potentially impacting the lives of every single person on Earth. And for such an enormous challenge, you need a pretty enormous response — as The New York Times detailed, the new climate accord was agreed upon by representatives from a staggering 196 countries around the world, making it the biggest ever collective international agreement on climate change. But it's not just about academic victories, obviously — the big question is, will the United Nations climate accord actually work?

Unfortunately, if you take that to mean "will this agreement prevent climate change from taking place," the simple answer is no. Human inaction on climate change — whether the result of prioritizing economic interests in the fossil fuel industry, or outright denial of the overwhelming scientific consensus on the Earth's warming — has been such a durable reality in our politics that it's believed the march of climate change is already irreversible.

The UN made this point last year, in fact, cautioning that the Earth was already locked into a future of extreme, potentially cataclysmic weather events. What this latest, admittedly historic accord is trying to do isn't to stop climate change outright, but rather to slow and temper its effects — to manage the decline, you might say. The primary target is as follows, as the text of the accord states:

As The New York Times reports, however, scientists believe that the hard figures laid out in the accord would only be about half the reduction in greenhouse emissions that would be needed to avert a global temperature rise of two degrees Celsius, which is viewed as something of a magic number in all of this. At that level of temperature increase, a slew of truly terrifying climate events would likely take place, including the complete melting of the Greenland and West Antarctic ice sheets, a process which would push global sea levels to dangerous levels. The West Antarctic sheet, as it happens, is already in dire straits — back in 2014, scientists warned that its collapse was already underway, and likely irreversible.

There's some reason to feel optimistic about the direction the accord moves the world, however. Unlike past accords, which let some countries off-the-hook if that the accord didn't just fix itself to that 2 degree figure, however, also laying out the benefits of holding global temperatures under one-and-a-half degrees Celsius. If this goal could be met, experts believe the effects of climate change could be significantly eased, although again, averting its effects altogether is broadly viewed as impossible at this point.

Also, as The Atlantic detailed, the accord is breaking new ground in one area of enormous consequence: it holds both richer, developed economies and poorer, still-developing ones accountable for reducing greenhouse emissions. In the past, international climate agreements have been stymied by the reluctance of emerging economic superpowers like China and India, which along with the United States account for 50 percent of the world's carbon dioxide emissions, according to the EPA.

Basically, this is an absolutely crucial step politically, even though it may be too little, too late to completely avoid climate change in the decades and centuries to come. But as long as we're clear-eyed about that fact, and we don't let it give way to fatalism or apathy, it's a valuable and essential to keep in mind. There's still a range of possible outcomes down the road, with a managed, conscientious response to a changing climate on one side, and dangerously irresponsible, head-in-the-sand thinking on the other. And as far as striving for as safe, healthy, and environmentally sound a future as we can achieve, the UN's climate accord will move the conversation in the right direction.

More like this
The Lionesses Are Calling For Equal Access To Football In Schools
By Sophie McEvoy
'The Capture' Is Finally Back – & S2 Looks Tense AF
By Sophie McEvoy and El Hunt
Why Experts Say Sleeping With A Fan On Isn’t Totally Risk-Free
By Sophie McEvoy
The 6 Best UV Umbrellas, According To A Dermatologist
By Rachael Green
Get Even More From Bustle — Sign Up For The Newsletter