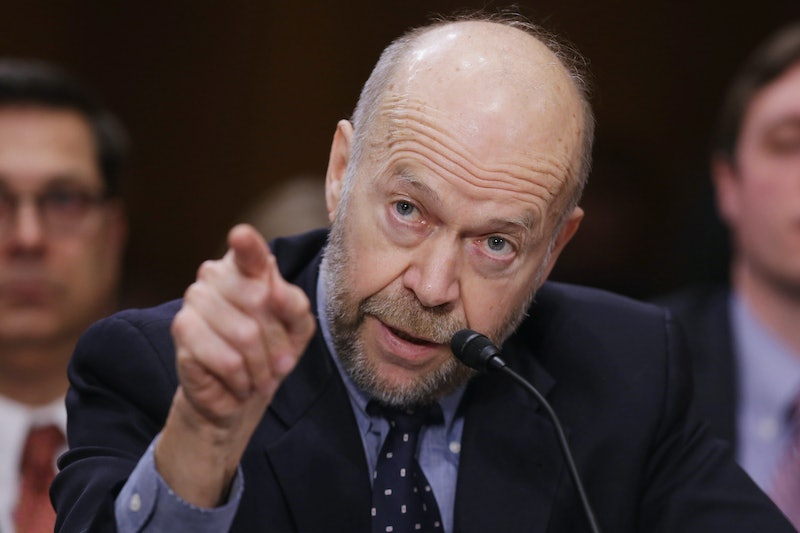 On Saturday, the United Nations reached an accord that's been broadly hailed as a major step towards combating climate change, bringing together nearly 200 nations. The agreement seeks to limit rising global temperatures to less than two degrees Celsius above pre-industrial levels, what many scientists see as a crucial threshold past which climate change's effects would be far worse. But it's not legally binding, nor does it place any taxes on greenhouse gas emissions, a fact which has drawn withering criticism from an icon of the climate awareness movement — James Hansen called the Paris talks "fraud" and "bulls**t" on Saturday, making the case that they haven't gone nearly far enough.

Hansen, 74, is currently an adjunct professor of Earth and Environmental Sciences at Columbia University, and he's been at the forefront of climate advocacy for years — he's been arrested multiple times during different environment-related demonstrations, including against the construction of the Keystone XL oil pipeline, and the practice of mountaintop-removal coal mining.

Back in 1988, while at NASA, Hansen delivered landmark testimony to Congress affirming that climate change was driven by human activity. Since then, he's been one of the country's most active, unapologetic voices for urgent, tangible action to combat climate change, and to hear him tell it, what went down in Paris on Saturday did not impress. Here's his take, as detailed by The Guardian .

It’s a fraud really, a fake. It’s just bullshit for them to say: ‘We’ll have a 2C warming target and then try to do a little better every five years.’ It’s just worthless words. There is no action, just promises. As long as fossil fuels appear to be the cheapest fuels out there, they will be continued to be burned.

Hansen's take is basically that all the good intentions and optimistic pledges in the world won't really bring about meaningful change, unless steps are taken to re-balance the financial incentives that cut in favor of dirty forms of energy like oil and coal energy. To that end, Hansen supports a fee on carbon — as The Guardian noted, the believes the word fee might work better than tax, given the loaded political implications of taxation — amounting to $15 per metric ton, with a $10 annual increase with each passing year.

Essentially, the idea is to gradually drive the cost of fossil fuels higher and higher, so to force companies to invest and expand cleaner forms of energy that will ultimately be less caustic to the climate. It's no surprise that this wasn't a function of the Paris accord, however — any effort to impose new taxes on carbon would've required approval across countless legislatures and parliaments around the world, including the United States, where the Congress is under the control of a party that often insists climate change isn't even happening.

That said, however, Hansen's frustration is plainly understandable. Considering how stridently and rigorously politicians will grandstand and take extraordinary measures on a range of issues — terrorism, economic instability, social issues and the like — a truly existential threat to everyone like climate change often gets short shrift. Hopefully the UN climate accord can act as a jumping-off point for more serious reforms around the world, but from the sounds of it, Hansen is not optimistic.