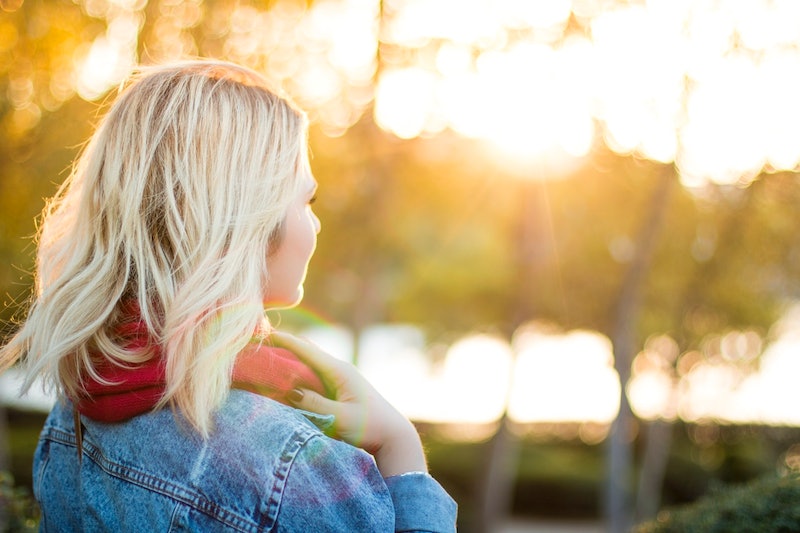 There are few insults that get thrown around more casually than "you're crazy" — and, call me crazy, but it seems like women are called "crazy" far more often than men. We've all heard a guy dismiss a woman's behavior as "crazy" when she does anything that makes him feel remotely uncomfortable — including engaging in totally healthy and natural behaviors, like expressing strong emotions during an argument, or crying over a breakup. But women don't get off scot-free here, either; there's definitely some girl-on-girl crime when it comes to using "crazy" as an insult. The bottom line is that both men and women need to stop calling women "crazy." Using "crazy" as an insult to begin with is disrespectful; and using it to describe a woman who dares to express any strong emotion is insulting, dismissive, and inappropriate.

Dismissing female emotions as "crazy" has a long, troubling history. "Female hysteria" was considered a legitimate medical diagnosis for centuries, dating back to the 4th and 5th centuries BC — but it was most widely diagnosed in the Victorian era. A woman could be diagnosed with "female hysteria" for a myriad of reasons, including but not limited to: anxiety, irritability, increased libido, decreased libido, and insomnia. And lest you think hysteria was a relic of our dark medical past, know that it was included in the Diagnostic and Statistical Manual of Mental Disorders , a book which covers all currently accepted mental health diagnoses, until 1980.

Luckily, today we can't be committed for having sexual desires or experiencing anxiety. But many women are still reluctant to express their emotions and needs, lest they earn the dreaded label of "crazy." If everyone stopped using "crazy" as an insult, I think we all might slowly begin to feel more comfortable expressing emotions, knowing that we could do so without the risk of being invalidated and insulted.

Here are five reasons everyone needs to stop insulting women by using the word "crazy":

1. It Implies That Expressing Emotion Is Wrong & Unhealthy

Of course, there are times when we need to hold ourselves together and keep our emotions in check — work meetings, large family gatherings, and weddings are generally not the best places to fly off the handle or burst into tears. But science tells us that it's unhealthy to suppress our emotions. We can't have healthy relationships with romantic partners, friends, or family members if we don't express our feelings.

2. It's Disrespectful To People With Mental Illnesses

It (hopefully) goes without saying that no one with any sort of mental health issue should be called "crazy." But even using the word as an insult encourages a lot of stereotypes that discourage people from seeking out mental health help when they need it. Stigmatizing mental illness is a huge problem in our society — so let's not perpetuate it by throwing around the adjective "crazy" as an insult.

3. It's A Double Standard

If a woman incessantly pursues a guy who has expressed that he's just not interested, she'll quickly be described as "crazy." But when I've told friends about a guy who just won't stop texting me, despite my obvious lack of interest, many have assumed he's just "clueless," or his behavior is somehow cute and endearing because he's clearly just so smitten. (For the record: It's neither cute nor endearing.)

Let's look at a pop culture example. Taylor Swift has basically accepted (and poked fun at) the fact that she's considered "crazy" for singing about failed relationships. (How dare a woman take her emotions and use them for artistic purposes?!) But, as Harris O'Malley wrote in a Washington Post op-ed last year, when Robin Thicke released Paula, an entire album that was essentially an attempt to reconcile with his ex-wife, he got a different reaction. Sure, many people found the concept behind his album to be inappropriate, but the C word was not used. If a female musician released a similar album, I'd venture a guess that she'd be called "crazy."

Sometimes, we don't understand exactly why someone is so deeply upset or emotional about something — because (surprise!) everyone is different, and therefore we are distressed by different things. This may make us uncomfortable, because when we can't directly relate, it's more difficult to find the "right" thing to say.

But the solution is decidedly not to dismiss the person's behavior as "crazy" or "irrational" simply because we wouldn't respond to a particular situation in the same way. Additionally, this attitude basically blames a woman for being upset. It sends the message that "I'm not going to engage in an empathetic conversation with you, because you can't reason with a crazy person." In short, calling someone crazy is actually a cop-out.

5. It Does A Disservice To Men, Too

We live in a culture that looks down upon people who are open with their emotions: women are frequently criticized for showing their emotions, and many men understandably withhold their emotions altogether, for fear of being branded as weak, thin-skinned, and — yup — crazy. This is truly a shame, because men experience emotions just as often as women do. From an early age, cultural conditioning tells men that "boys don't cry" and that expressing emotions is an emasculating sign of weakness. Of course, this is a separate stereotype that also needs to become a thing of the past.

But, since women do tend to express emotions more openly than men (whether due to cultural conditioning or other factors), I have to think that men may take notice of the negative responses women get. Men already have the cards stacked against them when it comes to showing their emotions and expressing their feelings — and hearing women described as "crazy" for doing so is certainly not going to encourage them to take the healthy route and be more emotionally open.

So, please — let's all stop calling women "crazy" whenever they express any emotion that makes us remotely uncomfortable. Getting rid of this insult will benefit women, men, and society as a whole.

More like this
Scotland's First Period Dignity Officer Has Sparked Backlash
By Darshita Goyal
Beyoncé & Madonna’s “Break My Soul” Remix Honors A Group Of Black Icons
By Stephanie Topacio Long
The Best Time To Date After A Breakup, According To Experts
By Bustle Editors
20 Things You Should Never Tolerate In A Relationship
By Rachel Sanoff and Kathleen Ferraro
Get Even More From Bustle — Sign Up For The Newsletter