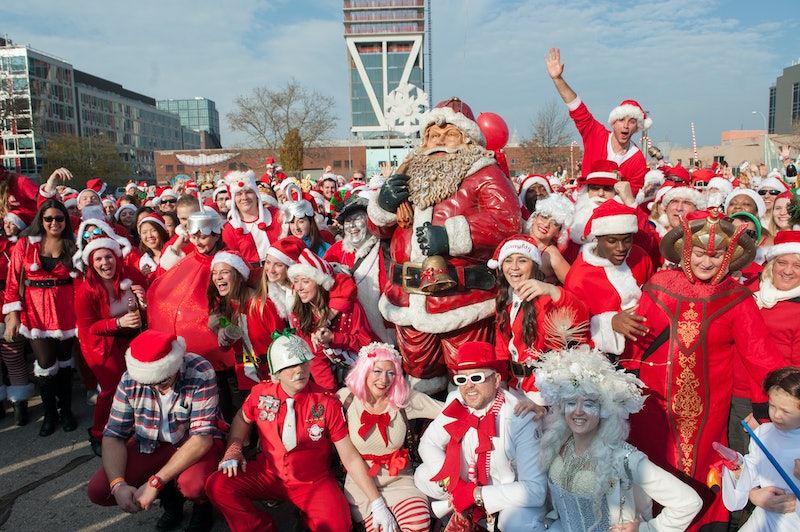 On Dec. 12, 2015, hordes of Santas, elves, and the odd person in a reindeer onesie descended upon New York for roughly 12 hours of drinking and spreading holiday cheer... sort of. I'm speaking, of course, of SantaCon 2015, the famed holiday tradition that has become the bane of the average New Yorker's very existence, and which took place this past weekend. (In fact, some Santas may still be celebrating as I'm writing this.) As notorious as the annual celebration may be among city dwellers, though, it isn't exactly well-known around the rest of the country. So what is SantaCon?

The short version is that it's a pub crawl for people dressed in holiday-themed costumes. The long version, however, is that SantaCon is an excuse for hundreds of people from surrounding states to put on Santa hats, take the train into New York, and parade through the city en masse. The bacchanal, which began in San Francisco in 1994, isn't all chaos; revelers are traditionally encouraged to participate in a food drive or donate to charity before the festivities begin.

Between the insane foot traffic and the spirited escapades, SantaCon definitely isn't for the faint of heart. Some restaurants and bars maintain "No Santa" policies, and last year, Bushwick locals made such a fuss about SantaCon that organizers were forced to move the beginning of the pub crawl from Brooklyn to Times Square.

Needless to say, people love to voice their opinions of SantaCon on Twitter as well.

So what does it look like when hundreds of Santas team up for a pub crawl? Let's take a look.

Yikes. It's gonna take a few dozen White Christmas viewings to calm down from that.

More like this
Here’s What Sarah Jessica Parker’s Canned Cosmo *Actually* Tastes Like
By Emma Garza
8 TikTok Pasta Recipes To Try Out At Home
By Emma Garza
If Your Refrigerator Is A Mess, These 25 Organizing Products Can Help
By Courtney Young
Meet The Spice Company Founder Who Sees Chai As A Metaphor
By Madhuri Sathish-Van Atta
Get Even More From Bustle — Sign Up For The Newsletter