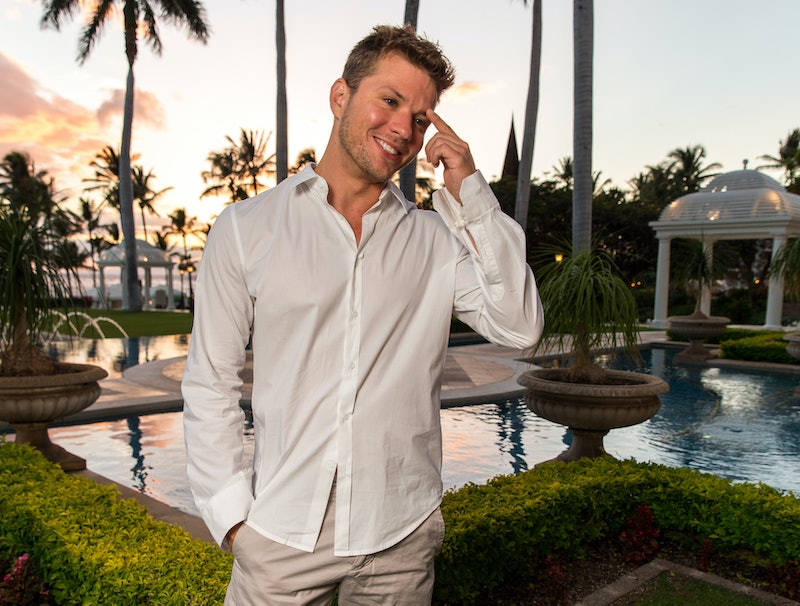 What the heck is Ryan Phillippe up to? Okay, he has two movies coming out this year, but I just feel like I haven't heard about him for a while. He's still getting followed by paparazzi though, and while it might sound like a new paparazzi pic of Phillippe might be boring, this latest one is pretty hilarious. Ryan Phillippe was photobombed by a lady with a sassy pose when he got snapped by photographers yesterday.

You might think the best thing about this picture is how Phillippe and his friend Brian Washington look super serious while the woman looks so fun and flamboyant, but there's more to the story than that, which, thank god, because there was no way to milk anything else out of a story about a Ryan Phillippe paparazzi pic.

The photobomber is named Sarah Hudson and she's quite the character. She is Kate Hudson's first cousin — Kate's father, Bill Hudson, is Sarah's uncle — and her godparents are Goldie Hawn and Steven Tyler. Sarah Hudson is a singer and the creator of the electronic dance music group Ultraviolet Sound. She also writes music and co-wrote the song "Dark Horse" from Katy Perry's most recent album, Prism. All that from a crazy Ryan Phillippe photobomber!

She also has one of the most interesting Instagram accounts ever and on her profile page describes herself as, "Artist hippie mermaid lover hustler witchy bitch. In love & living in an ethereal world of music magic style spirit queens dreams & crystal visions." Um... what? We obviously aren't living on the same plane so I don't exactly understand what she's talking about, but I think I like it. She posted the photobomb picture to her page saying, "Just thought I'd make this dudes 'paparazzi' pic a little sassier this morning!"

Judging by her pictures, Hudson likes to hang out with friends (including Katy Perry), take in Britney Spears' Vegas show, wear a lot of neon spandex, and post the odd photo of her morning prayer to the goddess Saraswati who will keep her "focused and confident that [she is] a limitless free spirit." Yep, just your average photobomber.

Hudson is hilarious, fun and pretty weird, and she definitely brightened my day. Hopefully she brought Phillippe some joy too. He posted the photobomb pic to his own Instagram saying, "Got papped w/ @bwash & that lady." Just imagine how much better the world would be if more paparazzi pictures got photobombed. Now get on it! When you see a paparazzi camera, pose!

More like this
Christina Perri Reacts To Her 'Twilight' Song Being One Of YouTube's Most-Viewed Ever
By Radhika Menon
Taylor Swift Calls Dwayne Johnson "The Man" After Revealing New "Taylor's Version" Song
By Jake Viswanath
Yes, You Do Know The Song From The 'Black Panther: Wakanda Forever' Trailer
By El Hunt
Prince Harry & Lilibet’s Bedtime Routine Sounds Truly Adorable
By Kira Richards and Sam Ramsden
Get Even More From Bustle — Sign Up For The Newsletter