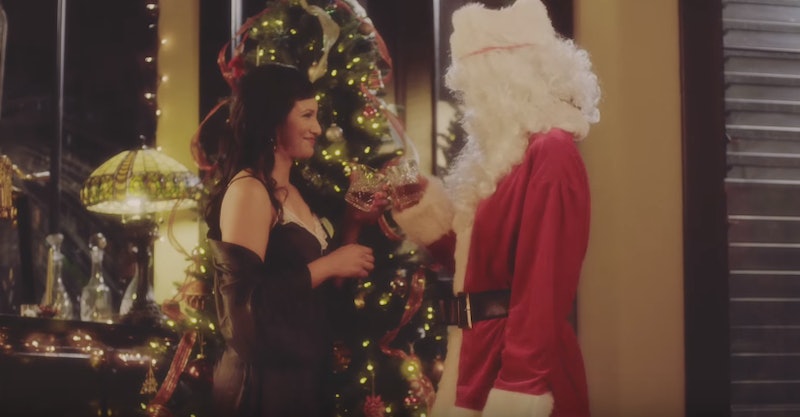 If you're in the market for a little inclusive holiday cheer, today is your lucky day. Recently, California couple Danielle LoPresti and Alicia Champion created a same-sex version of "I Saw Mommy Kissing Santa Claus," and it's enough to make even the most Scrooge-like among us feel the holiday spirit.

This holiday season, LoPresti and Champion became fed up with what pretty much every LGBT individual realizes eventually: As cheery and benevolent as most holiday music and movies are, they're not exactly known for their progressiveness. Of course, much of that is due to the time period in which most classic holiday songs were written — in 1952, when "I Saw Mommy Kissing Santa Claus" was originally recorded, attitudes toward homosexuality were so negative that a same-sex couple raising a child was nigh unthinkable.

That being said, this is 2015, and times have changed... Although apparently not much. LoPresti and Champion told the Huffington Post that they decided to create their own version of "I Saw Mommy Kissing Santa Claus" when they were unable to find any holiday material featuring a same-sex family. "After not finding a single holiday video of a family that resembled ours, we thought that since we have access to the resources, we would create something to fill that void," LoPresti said. Fortunately, LoPresti happens to be a singer, so after some studio time and a music video shoot, voila! A same-sex cover of "I Saw Mommy Kissing Santa Claus" was born, featuring all the classic hallmarks of the song.

First, there's the adorable child who catches his mom putting the moves on Santa.

Then there's a little super sweet (and weirdly sexy) seduction between the parents.

Admittedly, that doesn't last long — once the parents realize they've been caught, they scoop their kid up for some good, old-fashioned family time.

Images: Danielle LoPresti and The Masses/YouTube (3)

More like this
15 Ways To Deal With A Toxic Family During The Holidays
By Gabrielle Moss and Carolyn Steber
How Long Does Leftover Stuffing Last? Here's When To Toss It
By Chelsey Grasso and Alexis Morillo
Here’s Your Horoscope For Thanksgiving Weekend
By Mecca Woods
Mariah Carey Is "So Proud" After Her Kids Joined Her In The Thanksgiving Day Parade
By Stephanie Topacio Long
Get Even More From Bustle — Sign Up For The Newsletter