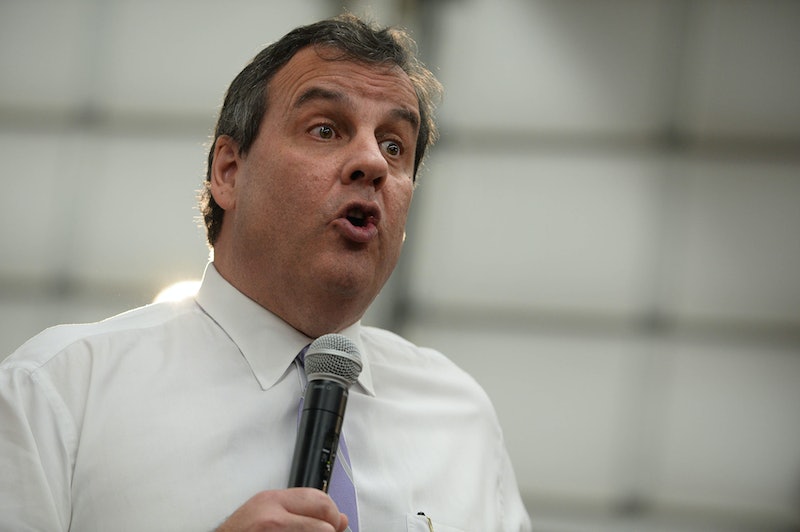 The last GOP debate of the year is set to take place on Tuesday, Dec. 15 and a candidate lineup has finally been announced. Aside from Mike Huckabee being relegated to the earlier debate once again, the biggest news prior to candidates taking the stage is the fact that Chris Christie made the CNN GOP primetime debate. Christie's poll numbers had previously been volatile enough to push him to Fox Business Channel's earlier debate time slot in Nov, having failed to receive an average of 2.5 percent or more.

For the first time this election season, Christie appeared at the JV debate along with Huckabee. Both had previously taken the main stage for the first three GOP debates. Having Christie move back up while Huckabee stays with lower polling candidates shows a marked contrast between the candidates' current momentum. Christie's number have been on the rise in New Hampshire, where the New Jersey governor has been avidly campaigning, doing the legwork needed to keep himself on GOP voters' radar. Conversely, Huckabee has been incredibly quiet in the granite state and even filed for the New Hampshire primary by mail rather than making an appearance. Christie has been critical of other candidates not doing more in the key primary state, calling out fellow candidate Marco Rubio for his perceived absenteeism.

This isn't to say that Christie's bump in popularity has translated into his popularity as a governor. According to a recent Rutgers University poll, the New Jersey governor has just a 33 percent favorability rating in his home state. Christie made an impressive showing in Nov, expertly handling criticism from Louisiana Gov. and former GOP candidate Bobby Jindal. It's this performance that may have endeared him further to voters. As of late, he's criticized Ted Cruz for what he perceives as an inhibiting stance on government surveillance and taken a stand on gun control as well as the highly contentious terrorism watch list, the latter of which Christie believes is "too spotty" and should have an appeal process to get names removed from the list.

In short, Christie is ready to debate and will do so on a far more sparse stage on Tuesday night. Christie will join just eight other candidates for the main debate, to be hosted by CNN and held at The Venetian in Las Vegas. The nine other presidential hopefuls mark the least crowded primetime event that the GOP has so far held. South Carolina Sen. Lindsey Graham and former New York Gov. George Pataki once again return to the pre-debate forum, having previously sat out last month's festivities entirely.