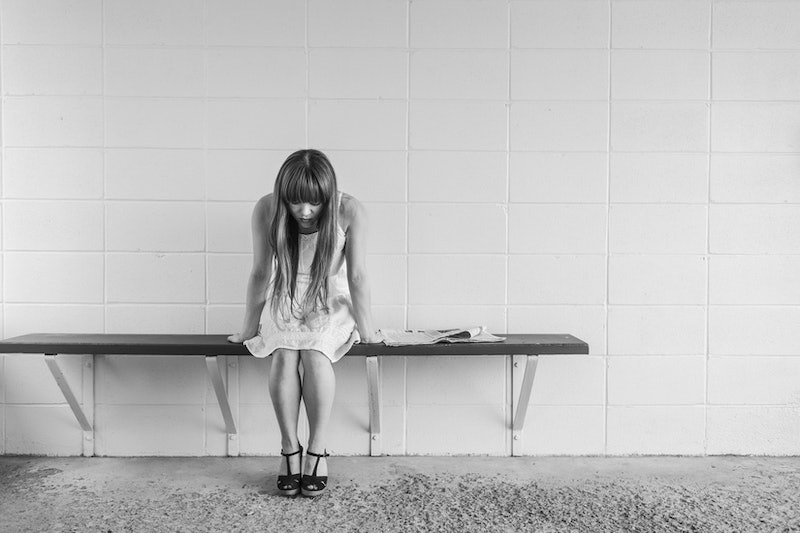 I'm not sure what's worse, breaking up or starting the whole dating process all over again. It all sounds exhausting. But that doesn't mean your should let fear make you ignore the signs that it's time to break up. Being in the wrong relationship sounds even more exhausting than ending things.

It's never easy to scrap your relationship and start all over again, especially if you've been together for a really long time and have very entwined lives. And there's that whole heartbreak thing. But when you stay with someone who you know isn't right for you, you're not only robbing yourself of true happiness, but you're wasting time that could be spent with someone who makes your heart into butterflies and glitter.

As a former Domestic Violence Victim Advocate and Planned Parenthood Certified Responsible Sexuality Educator, I've seen dozens upon dozens of couples fighting to save something that was so clearly over. Nothing I could tell them would help. They had to come to the realization on their own. Hopefully some of these signs that it's time to throw in the relationship towel will spark your realization, if you need one. And if you're reading this article, that's already a good sign...

Work/life balance goes out the window when you're avoiding a breakup. You spend more time at work because you'd actually rather be at work. Or maybe you're spending all your time at the gym or at school or with your friends. The point is, if you've suddenly been spending a lot of time away from home, maybe it's not a coincidence. Maybe you're avoiding the love nest because it's a little low on love.

2. You Can't Stop Thinking About Your Mismatched Goals

You want kids. Your partner wants dogs. You want a house in the country. Your partner wants an apartment downtown. At first it was fine, because things were new and you were in love. Now that it's been a while, you realize that if you keep taking things to the next level, it's going to eventually reach an impasse, and now all of a sudden you've wasted a decade of your child-rearing years on someone who will never have kids with you! If you're preoccupied with these thoughts, it's likely time to face them.

When your partner snores, you want to put a pillow over their face. When they chew, you want to flee the country. When they try to cuddle you in your sleep, you tense up and try to find a way to wiggle free. More than these little things, there's just a growing feeling that you don't necessarily like this person you've dedicated your love life to. If you find your partner more annoying than anything, and it's getting to the point where you start yelling or withdrawing, it might be time to move on.

4. You Have A Wandering Eye

If you find yourself with a wandering eye, or perhaps wandering genitals, odds are (unless you have that kind of arrangement) that things aren't so great. Or, they won't be once your partner finds out. Plus, wandering eyes are dangerous. You could end up with real feelings for someone else, which raises the body count when things go bad. If your partner isn't the one on your mind (or genitals) then you should probably ask yourself why.

I'm not talking about one of those common but temporary sexual dry spells that all couples go through. I'm talking about waking up one day and realizing you'd rather make out with a pizza than with your partner. Eventually you run out of excuses and you have to face the fact that you're just not into it anymore, for some reason. Lack of sex doesn't necessarily mean things are over, but in some cases, it's the first sign that your relationship had run its course.

6. You Have That Settling Feeling

Sometimes things aren't necessarily going wrong, but you can't shake the feeling that the person you're with isn't the one. Something just feels off. Your guts tells you that there's more. Or something is missing that you can't quote put your finger on. It's a weird feeling. Sometimes it passes, or you learn to ignore it and find happiness. But sometimes you can't shake it and the worry just grows bigger and bigger. If you've never felt that feeling like you're just not into it, it's hard to explain, but if it crops up, ignoring it might not be your best move.

When you're spending a lot of time with someone, it's important to feel understood. To feel like your partner gets you. Supports you. Is a friend to you. Or at least tries. If you feel like you're with someone who doesn't know you, and doesn't really want to, then you might just be going through the motions of a relationship. That's no good. Going through the motions isn't happiness, it's settling, and it's not the wonderful ride you signed up for when you tried to love someone.

You can't be afraid to leap when you know deep in your heart that the relationship isn't for you. You're only delaying (worsening) the heartache when you finally do the deed.